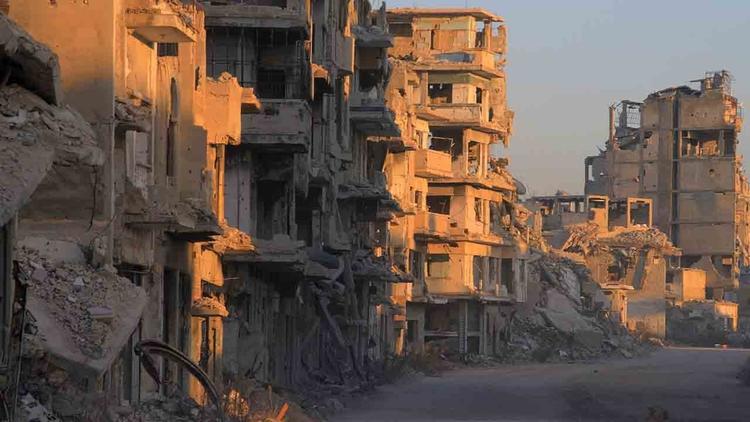 Elizabeth Palmer reported from Ankara last Thursday that Secretary of State Rex Tillerson had difficult and inconclusive discussions with Turkish president Tayyip Erdogan concerning Syria. After the meeting he said publicly, that the “longer-term status of President (Bashar) Assad will be decided by the Syrian people.”

CBS and other news organizations argued that Tillerson’s statement signals a shift in US policy from that of the Obama administration, which called for Syrian president Bashar al-Assad to step down.

This point is true as far as it goes. But it also has to be said that the Obama administration decided at the time of the fiasco of the red line over chemical weapons use (when Obama could not get the UK parliament to support joint Anglo-American action) in September of 2013, that it was unwise to try to unseat al-Assad. From that time till now, the US Air Force has never deliberately targeted a Syrian military or governmental facility.

So regardless of rhetoric, Obama behaved as though he believed what Tillerson just openly said.

Still, it is a little startling to have the US abruptly speak about Syria exactly the way the Russians do. Michael Jansen notes that the US is now decisively on the other side from the Syrian rebels, who have been demanding at the Kazakhstan peace talks that al-Assad step down as a prerequisite to new elections and national reconciliation. Jansen reports that one reason the rebels make this demand is that their electoral analysis suggests to them that if free and fair elections were held in Syria, al-Assad would likely win.

This analysis is correct. The regime probably has 80% of the population under its authority now– all the major cities plus some of the countryside, whereas the rebels have only a couple urban enclaves and then mostly rural villages. Moreover, populations like those in Aleppo, Latakia and Damascus are grateful to be living under even a brutal one-party state rather than under the mostly fundamentalist rebels, some of whom are openly allied with the al-Qaeda-linked Syrian Conquest Front (formerly Jabhat al-Nusra or the Support Front).

Syria is probably about 6% Christian, 3% Druze, 14% Allawi, 2% Shiite, 10% Kurdish– i.e. about 35% minorities. Then of the 65% that are Sunni Arabs, a majority are secular-minded and, as in West Aleppo, are just as afraid of al-Qaeda and ISIL as are the minorities. So al-Assad would almost certainly get a majority of the votes in any free and fair election at the moment. That doesn’t mean people like living under a one-party state or one that tortures. It just means that the rebel opposition turned to an extremist Sunni discourse that scared the minorities and secularists. The Saudi-backed Army of Islam, tagged as ‘moderate’ by Obama’s CIA, thundered against the wretched Allawi heretics, as they called them, and no state erected by this Saudi candidate would offer a decent life to Syria’s minorities.

So if the rebel private polling is correct, then what Tillerson is really saying is that Syrians are stuck with al-Assad, and that the Trump administration is sanguine about that prospect.

Saying this publicly puts Tillerson and Trump on the same side as Russia and Iran in Syria, but poses a set of problems for US relations with Saudi Arabia, Qatar, and Turkey, who have been supporting one or another of the increasingly fundamentalist rebel groups now bunched up in Idlib Province in the north or East Ghouta near Damascus, etc.

In essence, Tillerson is telling the Gulf Cooperation Council, including the Saudis, and Turkey that their side in Syria has lost.

Worse for the Erdogan government in Turkey is that the US still seems determined to use the post-Communist YPG Kurdish militia to expel ISIL from its Syrian capital of Raqqa. Turkey views the YPG as indistinguishable from the PKK terrorist group it is battling in eastern Anatolia. Erdogan had high hopes that Trump would drop this Obama policy. Instead. Trump’s Secretary of Defense, Jim Mattis, appears to have doubled down on the alliance with Syria’s Kurds. The Kurds will want a loose federalism in Syria after ISIL is gone, within the matrix of which they can erect an all but independent Kurdish mini-state. Such a development is Ankara’s worst nightmare.

At the same time, Trump seems to be peeved at Erdogan and at Egyptian strong man Abdel Fattah al-Sisi for not stepping up to wage the war on ISIL in the country’s east.

Channel One accused the USA of trying “to break up Syria into small pieces”, “to weaken Bashar al-Assad”, “to destabilise Iran”, “to put pressure on the Turkish president who is out of control” and “of course, to weaken Russia’s influence in the region”.

‘According to Channel One and NTV, the USA has promised Kurds in Iraq an independent state. Creating an independent Kurdish state, a pundit told Channel One, “poses a direct threat to national security and the territorial integrity” of the states which have Kurdish enclaves on their territory. As a result, “the whole system of regional security will be destroyed”, he said.

According to NTV, Tillerson and Erdogan, who met in Ankara on 30 March, had “difficult talks” and reached no agreement on Kurds. The US support for the Kurds is aimed “against President Erdogan”, a pundit told NTV.

“We will be witnessing a conflict emerging between the USA and Turkey before our very eyes,” another pundit told NTV.

And Channel One described relations between the USA and Turkey as being “on the point of a nervous breakdown”.’

In fact, the US is unlikely to have promised the Kurds their own state. But maybe a loose federalism. The use of the YPG isn’t aimed at Erdogan; it is just Pentagon pragmatism. The YPG are the only ones willing to step up and take ISIL on. And while US relations with Turkey have been better, they aren’t on the verge of breakdown, however much the Russian intelligentsia are hoping for that.

So, yes, Tillerson is speaking a different language about Syria than did Obama. But Trump’s concrete policies and those of Obama with regard to Syria seem to show a great deal of continuity.