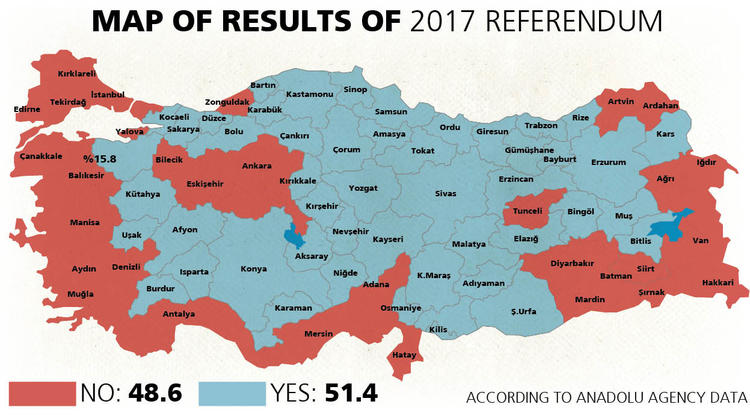 Turkey’s historic referendum on Sunday will move the country from a parliamentary to a presidential system. Many observers are sounding a death knell for Turkish democracy as a result, but the move to presidentialism in and of itself isn’t the problem.

Interestingly, Erdogan won with a similar demographic profile to that of the 2016 US presidential election. Erdogan’s constitutional change largely triumphed on the basis of rural and provincial voters but was rejected by the big cities. Turkey’s equivalent of the Red States drove the change.

Turkey is in essence moving from a British parliamentary system to a French presidential one.

In a parliamentary system, there is no strong separation of powers, since the prime minister represents the executive but he is elected by and functions within the legislature.

In a presidential system, the is a separation of powers and parliament is not so beholden to the executive.

Although some political scientists have argued that parliamentary systems are more stable than presidential ones, others have complained that his generalization is skewed (most presidents were in Latin America, e.g.).

The 18-point referendum even has a few areas where it is more democratic. The age at which candidates can serve in parliament was lowered from 25 to 18!

The real problem with Turkish democracy is not that it is parliamentary or presidential. It is that it isn’t functioning very well and that the executive is grabbing extra-constitutional powers.

The July 15, 2016, failed coup, gave Erdogan the pretext to declare a state of emergency suspending civil liberties. (National states of emergency have always struck me as fairly stupid. The nation never needs its rights more than when there is an emergency). He has by decree just fired over 100,000 people from government jobs, has fired large numbers of university professors, has dissolved entire universities. In most instances there has been no judicial procedure.

There apparently hasn’t ever been any real freedom of the press in Turkey. This sad state of affairs was revealed with the Gezi Park protests in 2013, when it became obvious that the press was afraid to cover them or to offer a point of view on the protests differing from that of the government.

Since the failed coup, things have of course gotten dramatically worse, with many journalists jailed or chased out of the country. But these steps were taken in a parliamentary system, after all.

Then there is a tyranny of the majority. Tayyip Erdogan doesn’t believe in minority rights and Turkey has no Connecticut Compromise. Erdogan’s center-right, religiously-inflected Justice and Development Party (AKP) appears to have the reliable support of a bare simple majority of the population. But he is typically also supported by the rightwing nationalist party, the MHP. Between the two of them he typically has had about 2/3s of parliament behind him.

As long as that configuration remained stable (and it has been true since 2002), Erdogan and other AKP leaders have had virtually no checks, even in a parliamentary system.

Actually, in this referendum Erdogan’s typical coalition broke down slightly, so that he was not able to get 2/3s but only a simple majority. The larger cities all defected (Ankara, Istanbul, Izmir), even though Ankara and Istanbul had in the past been strongholds of AKP. So Erdogan won his referendum almost entirely on the basis of the rural Sunni Turkish vote. Rural Kurds in the southwest (many of whom had been in his parliamentary majority) also defected.

So Turkey’s system has been changed by provincial Turkish Sunnis, over the objection of urban people and of rural Kurds and Alevis. 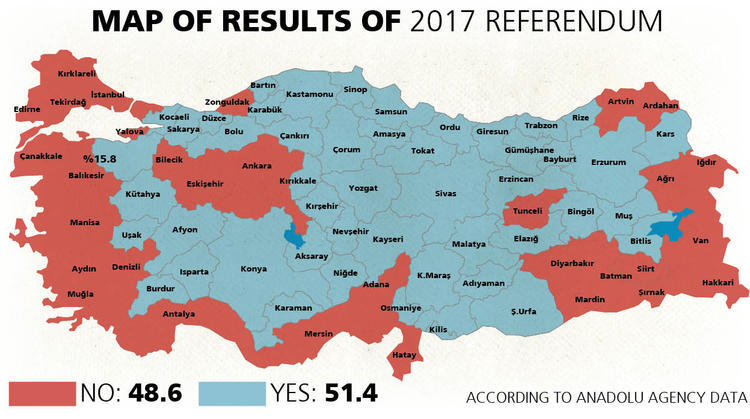 There are, of course, anti-democratic implications of some of these changes. Under the old system, the president was symbolic and could not remain head of a political party, so that Erdogan faced the possibility of losing control of the AKP. Now he can be president and party head at the same time (as the US president is). In essence, Erdogan has gained a potential political longevity under the new system that was not assured to him under the old. Since Erdogan’s actual aim is to move Turkey to a dictatorship Lite, what some call “illiberal democracy,” his new shot at remaining in power for a decade or more gives him plenty of time to implement that project. (I say this as someone who argued since the early 2000s that the AKP and Erdogan should be given a chance to build a pluralist society. You could say I was always wrong. Or you could say Erdogan abruptly changed on me. Either way, I haven’t come to this conclusion glibly).

He also can now shape the judiciary unilaterally, which bodes ill for the future. He will almost certainly pack the courts with, if not fundamentalists, then very conservative judges who lean toward religion.

In that sense, sure. Turkey’s brief experiment with pluralistic democracy is definitively over with. But probably it has been dead for a while, and some at the funeral were too polite to say so.