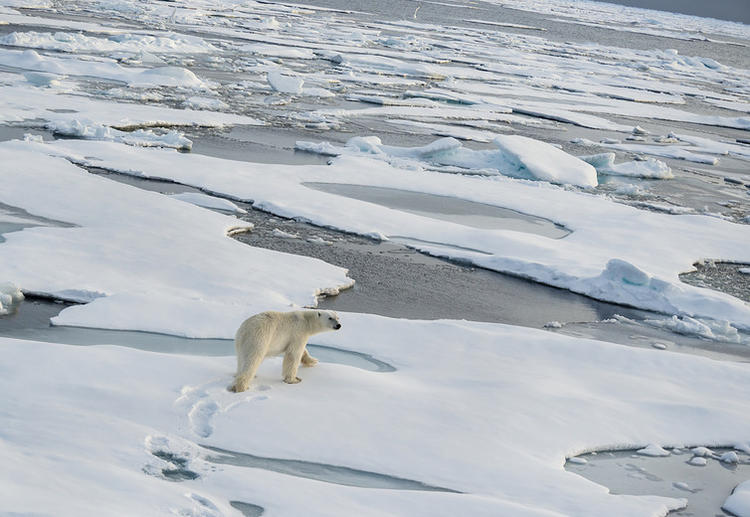 The seasonal sea-ice retreat across the Arctic Ocean is perhaps one of the most conspicuous indicators of climate change. In September 2012, a new record was set for the time that we have been tracking sea ice with satellites: the minimum sea ice extent was some 50% below the climatic average for that month. Four years on, and the September 2016 record tied with 2007 for the second lowest sea ice extent since measurements began in 1978.

The seasonal retreat of sea ice is largely because the atmosphere in the Arctic is heated under 24 hours of daylight in the summer, and this makes the ice melt. In the cold of the perpetual darkness of winter, the sea ice extent returns to its winter norm: the only heat available to slow sea ice growth is from winds and ocean currents moving warm air and water in from the south.

However, during the winter of 2016/17 the sea ice did not return to its winter norm. In fact, the sea ice extent was the lowest ever recorded for this time of year.

Though the Arctic is not exactly in the UK’s backyard, the changes in sea ice coverage are thought to be at least partly responsible for the recent run of severe weather events experienced across the northern hemisphere. These include unusually cold winter weather across parts of Europe and the US, and deadly smogs in parts of China.

The Arctic is warming about twice as fast as the rest of the world. As the difference between atmospheric temperatures in the Arctic and mid-latitudes (which includes the UK, part of North America, and a band of northern Europe and Asia) decreases, the speed at which weather systems (depressions) track across the Atlantic to northwestern Europe is reduced. This means that snow and rain can persist for longer, and high pressure systems are “harder to shift”, which can lead to further reductions in air quality.

The largest oceanic heat input to the Arctic comes from water that has been in the Atlantic Ocean, and has travelled through the Fram Strait and around Svalbard. This “Atlantic water” circulates around the Arctic in an anti-clockwise direction. This water is currently the warmest it has been for 2,000 years and now contains enough heat to completely melt the sea ice within a couple of years.

However, while this water is warmer than the ambient Arctic water, it is also saltier, and so heavier, too. It sits at depths of 100 to 400 metres across much of the Arctic Ocean. This means that the Atlantic water heat is insulated from the surface by a layer of lighter, colder and fresher Arctic Ocean water which sits above it.

Atlantic water contact with the sea surface – which then melts the sea ice impacting coverage and thickness – has previously been restricted to the region around Svalbard, where the Atlantic water enters the Arctic Ocean. However, new measurements reported by a team of international scientists have shown, for the first time, that previously insulated Atlantic water heat is now being stirred up to the sea surface. This results in enhanced sea ice melt, much further to the east, north of Siberia.

We previously measured the upward Atlantic water heat flux in this region in 2007 and 2008. At the time it was very modest. However, the new measurements estimate this flux to have increased by two to four times over the winters of 2013/14 and 2014/15. The result of this increase is that sea ice thickness has been reduced by between 18 and 40cm. This exceeds the impact of the atmospheric heat on sea ice melt alone (estimated to be 18cm).

The researchers attribute the change to a reduction in the vertical density gradient within the overlying Arctic water layer. The Atlantic water has moved closer to the sea surface, and created conditions much more like those found around Svalbard, where there is less sea ice. Lead researcher Igor Polyakov describes the change as the “atlantificiation” of this part of the Arctic Ocean.

These important new results highlight the increasing role of heat coming from the Atlantic Ocean in driving sea ice retreat in the Arctic Ocean. They are a profound sign of the planet’s changing climate, and show that there is a link between retreating Arctic sea ice and the severe weather that has been witnessed in mid-latitude countries.

Furthermore, they show that the impact of Atlantic water heat on sea ice is highly variable across the Arctic Ocean, with significant heat fluxes restricted to geographic “hot spots”. The identification of these hot spots will be key to improving how we forecast the weather in the northern hemisphere and understand how the retreat of Arctic sea ice impacts on it.