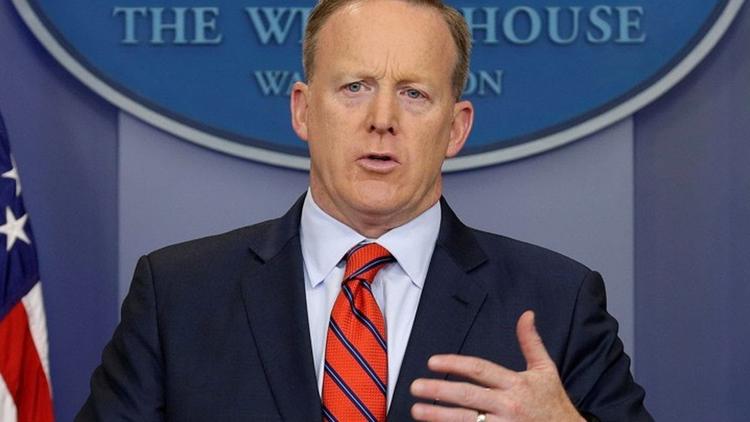 But Spicer’s belligerent malapropisms soared to new heights of WTF on Tuesday with his comments about Hitler not gassing his own people.

When Mitt Romney dissed nearly half of Americans (including Vets, retirees and students) as freeloaders addicted to government handouts stolen from the deserving rich like himself, Bill Clinton observed, in words to the effect of “He seems like a nice man and he’s done well in business, but he ought not to be speaking in front of people.”

Spicer and Trump exemplify that principle in the nth degree.

Spicer meant to say that even the German army under the Nationalist Socialists did not use poison gas in its battles at the front. Nazi Germany had gas stockpiles and did use them on its Jewish, Romany, gay and other Nazi-despised populations (its “own people”). Some 6 million Jews alone were gassed. Several reasons have been suggested for the avoidance by the Nazis of gas at the war front; the most plausible is that it was MAD– they thought the Allies also had this weapon in quantities, along with perhaps an advanced biological weapons capability.

These remarks were ineptitude, not “white nationalism” (he is from the mainstream Republican Reince Priebus side of the administration). His father was an insurance agent and his mother administers an East Asian studies Department at Brown. He has an MA in security studies and served in the Naval Reserve as a publicity officer.

Much worse was what Trump himself has said:

But Spicer’s problem was not in misspeaking. He got himself into trouble because he just did what Washington does. He demonized the enemy du jour. And when Washington demonizes, it can’t do it half-heartedly. If the enemy isn’t Genghis Khan building towers of skulls, you might as well go home.

Now Bashar al-Assad is certainly a war criminal. He has used indiscriminate violence against the rebels, killing tens of thousands of civilians. He has also tried to starve resisting populations out. And he has murdered some 10,000 prisoners in their jail cells under torture.

But al-Assad is not Adolf Hitler and the ramshackle remnants of the Baath Party are not Nazism. Al-Assad, a spoiled optometrist with a weak chin who likes Phil Collins songs, had the misfortune to be in power when a revolution broke out against him and his regime. His uncles would have smothered him in his bed with his own lacy pillow had he shown any flexibility, since the al-Assad clan knows exactly what would happen to them in a democratic society. So he had his brother Maher draw up tanks, artillery, and snipers and attack the largely peaceful protesters, driving them to civil war.

It is legitimate to denounce al-Assad for his war crimes. But those tagged as enemies by the US always get the Big Demon treatment, and our fawning corporate media is happy to go along. Al-Assad has to be Hitler himself.

Saudi King Salman doesn’t get compared to Hitler even though his society is a brutal dictatorship and his air force has been bombing Yemeni civilian cities and crucial infrastructure indiscriminately, waging a total war from the air on those living under domination of the North Yemen government (a condominium of Ali Abdullah Saleh’s nationalists and Houthi tribal rebels from the Zaydi sect of Shi’ism). Saudi Arabia’s war has turned Yemen into the world’s second worst humanitarian disaster after Syria itself.

Or there was that time America’s good friend President Sukarno Suharto of Indonesia had about a million leftists genocided in the mid-1960s, with nary a word of condemnation from the Johnson administration. Quite the opposite, Washington was positively delighted and had encouraged some of the carnage. Sukarno has been so non-demonized in American culture that no one knows who he is here. But he was responsible for substantially more loss of innocent noncombatant life than al-Assad has been.

Or from 1950 in South Korea, we have this revelation:

“Grave by mass grave, South Korea is unearthing the skeletons and buried truths of a cold-blooded slaughter from early in the Korean War, when this nation’s U.S.-backed regime killed untold thousands of leftists and hapless peasants in a summer of terror in 1950.

With U.S. military officers sometimes present, and as North Korean invaders pushed down the peninsula, the southern army and police emptied South Korean prisons, lined up detainees and shot them in the head, dumping the bodies into hastily dug trenches. Others were thrown into abandoned mines or into the sea. Women and children were among those killed. Many victims never faced charges or trial.”

The leftists executed on this industrial scale came to at least 100,000 and very possibly 200,000, in the latter case probably about the same number of combined combatants and noncombatants that al-Assad has killed (and the size of the populations, Korea in 1950 and Syria today is about the same). Yet President Rhee Syng-man, not to mention President Truman– not demonized.

In American Propagandaland Ho Chi Minh was not a leftist champion of independence for the long-suffering Vietnamese from a rapacious French imperialism that dominated and looted them for decades. Col. Edward Lansdale, head of covert operations in the U.S. Saigon Military Mission in the early 1950s, tried to scare Vietnamese Catholics by having posters pasted around Hanoi “depicting communists closing a cathedral and forcing people to pray under a picture of Ho Chi Minh.” Ho was not a nationalist. He was a false god seeking to displace the Son of God.

Or there were the Nixon-Kissinger CIA “spoiling operations” against Salvador Allende in Chile in 1970, including funding right wing media in Santiago to smear him.

America’s right wing dictator and monarchical friends are never scrutinized, much less demonized, in the pliant American corporate media, even if they have killed lots and lots of people and even if they have (like Saddam Hussein in the 1980s) used poison gas. But when the US elite has it in for another leader, then they are given horns and a devil’s tail.

It should be possible to be honest about America’s own human rights failings in war abroad. . You understand why the White House spokesman plays these propaganda games. But in a free society, journalists shouldn’t have to go along with them. And we’ll never get a just world unless there is a single rule of law for all, rich states and poor states, powerful states and weak states, us and them.

Bashar al-Assad is just a run of the mill global south war criminal. The US probably can’t do much about him given Russian and Iranian support for him. It may therefore be a little unwise to choose him as the poster boy for regime change, since such propaganda campaigns take on a life of their own.

By the same token, Donald J. Trump is not an angel, and the unilateral military action of one man is incompatible with a rule of law. Trump’s executive orders aimed at massively increasing carbon and other pollution will certainly kill millions. We have a lot of war crimes of our own to investigate and apologize for.