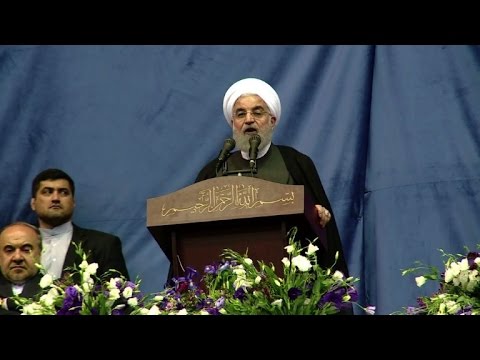 The spectacle of Trump and of cronies such as alt-Neo-Nazi Steve Bannon hobnobbing with the Saudi monarchy, of the president curtsying to King Salman and receiving a huge gold medal from him (for what, bashing Islam relentlessly?) was made all the more seedy by its juxtaposition to the elections in Iran. These were won by center=right Hassan Rouhani, giving him a second term as president, even though he was opposed by Iran’s hard liners.

Neither Saudi Arabia nor Iran is what you might call a democracy. But Iran has a more flexible political system.

President Hassan Rouhani, who won a second term on Saturday, castigated his main political opponents on the right as having been “jailers” of the people for the past few decades. Rouhani’s signal achievement was the nuclear deal with the UN Security Council and an attempt to open to Europe. He attracted the support of youth, women and liberals in Iran.

The Saudi monarchy hasn’t been denouncing its jailers. And while it has all along had friendly relations with the West, those are at the level of oil sales, not values.

Saudi Arabia is arguably the world’s last absolute monarchy. Even constitutional monarchies have been abolished in much of the world. Absolute monarchy is the top endangered species of comparative politics. It is also fragile and clunky. It has no feedback loop. The king and his circle do what they want. Does the Saudi public really want the Yemen war? We don’t know. Polling of that sort would not be allowed. Deputy Crown Prince Muhammad bin Salman, the son of the current king, is only 31 and the reckless and arguably genocidal Yemen war appears to have been his idea. Public debate not welcome.

Trump just sold the deputy crown prince another $110 bn worth of high-tech, state of the art weapons. Yemen is having a cholera outbreak and is on the verge of mass starvation.

The Saudis have allowed municipal elections (2005, 2011, and 2015). In the third such elections, in 2015, the citizens elected 2/3s of city council members on 284 municipal councils, and the king appointed the rest. The king appoints the mayor. The city councils have very little policy-making power; they oversee garbage collection. Although the late King Abdullah, a moderate reformer, allowed women to vote and run in 2015, vanishingly few were elected.

Nor is there any freedom of the press. Critics of the Saudi government are routinely imprisoned arbitrarily for as much as a decade or more, and sentenced to flogging, i.e. torture– as many as a 1,000 strokes.

Not only has Saudi Arabia stood for absolutism at home, it has mobilized to destroy populist and democratic movements in the region. Arguably it was a major force behind the derailing of the brief Egyptian experiment with parliamentary democracy. It suborned liberal Syrian revolutionaries into a fanatical Salafism (the Jaysh al-Islam) that threatened Alawite Shiites and other Syrian minorities and preached against democracy. Behind the scenes it has pushed a destabilizing fanatical Salafism throughout the Muslim world.

It is not true, as many American observers keep saying, and as Donald Trump has said, that the Saudi monarchy was entangled in 9/11 (that’s ridiculous– do you know what it did to their stock portfolio?). Nor does the Saudi government deliberately spread terrorism. I don’t think they realize that in Sunni societies, their hard line Wahhabism (coded as “Salafism” outside the kingdom) is not quietist or loyalist, as Wahhabism is in Saudi Arabia. It tends to turn radical.

The Saudis can be pragmatic. They supported the secular government of Hosni Mubarak in Egypt to the hilt, and the current regime in Egypt, backed by Riyadh, hates political Islam. The Saudis want the Egyptian army at their beck and call and want no competitors for religious charisma, whether the Muslim Brotherhood or Khomeinist Shiism.

The Saudis are the most problematic American ally. The alliance was driven by oil and Communism. Since neither are likely to be important in 2040, you’d have to short the stocks of this particular alliance.

In contrast to the Saudis, who talk nice to our faces about the United States even if they don’t actually approve of us, the Iranians are stuck in 1979, chanting ‘Death to America’ and demonizing the US. The Iranian system is dual. It has a clerical theocracy, run by the Leader or Guide (Rahbar) (they don’t actually call him the supreme leader in Persian–that is Western Orientalism). The clerical Leader is head of the armed forces and intelligence and appoints the judiciary and the commissions that censor newspapers and vet candidates.

The Leader is not, however, exactly a dictator. The system has a little bit of wriggle room, and a few feedback mechanisms. There are fairly aboveboard parliamentary and presidential elections. But although the elections themselves are usually not very fraudulent, the candidates are vetted by the ayatollahs and liberals and leftists are not allowed to run. It is sort of the mirror image of the US states that have imposed voter suppression. Iran controls the candidates, not who can vote for them.

Iran also has no freedom of speech or the press, and when newspapers push the limits that are closed. People are arrested and tortured for speaking their minds.

On the other hand, Iranian centrists nowadays have much more power, through the president and parliament, than do any Saudi centrists that might exist.

Although the US politicians brand Iran the major supporter of terrorism, this charge is not true. The Israeli squatters on the West Bank are terrorists, and the US implicitly backs them. The US backed death squads in Central America, i.e. terrorists. The US backed the Mujahidin in Afghanistan, who engaged in a great deal of terrorism against Afghan leftists and feminists. The US brands groups it does not like, such as Hizbullah in Lebanon, as terrorists. But most of Hizbullah’s efforts were aimed at getting the Israeli army out of Occupied South Lebanon. That isn’t terrorism. Nowadays Hizbullah is fighting al-Qaeda and ISIL in Syria (though it also fights more moderate Sunni rebels). Also not terrorism.

Iran could make sense as a US ally if stupid sorts of politics did not intervene on both sides. At some 80 million, it is a substantial country and a huge market. Its GDP is similar to Poland’s. The US and Iran could do a lot of business with one another.

So on the day the Iranian public bucked the country’s Leader and the other hard liners and put centrist President Hassan Rouhani back in for a second term, the American president was being feted with gold metals in an absolute monarchy that spreads an anti-Western Salafism around the Muslim world.

And this is the same president who has endlessly bashed the Saudis in particular and Islam in general.

Electric cars will be as cheap as gasoline cars, probably by the early 2020s, and after that oil will quickly become worthless. How will that change this screwy picture?

AFP: “Iran’s Rouhani: a moderate cleric open to the world”