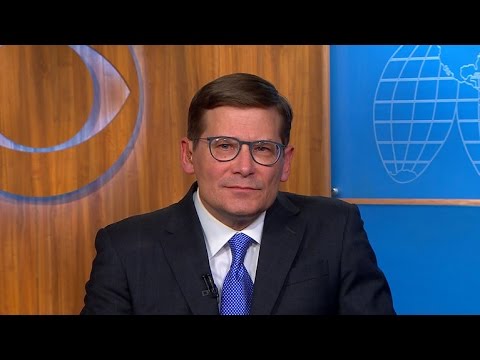 Donald Trump is most probably not a Russian spy. He may have unusual connections to Russian businessmen (that isn’t clear), and seems to have made $100 million off Russia since 2008 (not that huge a sum for a multi-billionaire).

Donald Trump is a braggart. He grabs a piece of information the way a crow grabs paste jewellery. Unlike the crow who will likely hoard it, Trump passes it around for all to see.

Greg Miller and Greg Jaffe at WaPo got the story. Trump was bragging to the Russian Foreign Minister Sergey Lavrov and the Russian ambassador to the US, Sergei Kislyak and a whole gaggle of Russian reporters from outlets like RT and Sputnik (the US press was excluded, apparently for being the worst people in the world).

We have the best intelligence, he said.

Then he told the story of how we know from an ally who has a spy inside ISIL (ISIS, Daesh) in a particular city, and who discovered that ISIL has an evil plot. They want to take the batteries out of laptops, and fill the space in with a special explosive that is hard to detect. That explosive has to be detonated with a fuse lit on fire, it can’t be done remotely. So the plan was to get a laptop-bomb aboard a plane and light a quick match and … kablooie. This is a variation of previous al-Qaeda plots– the shoebomber put the material in the heel of his shoe, which is why we have to take off our shoes at the airport. They were thinking of dissolving it in a big cup of liquid, which is why we can’t take receptacles of liquid bigger than 3 oz. The underwear bomber over Detroit in 2009 used the same substance, but it is hard to ignite and he had it in a pouch in his underwear, and well, I think he probably can’t have kids anymore, besides doing life in a Federal penitentiary. The underwear bomber had a pouch on his body, which is why those machines at the airport want to see under our clothes.

The big deal is not that Trump told the Russians the vague outlines of the plot. It had more or less been announced because the US is putting pressure on the airlines not to let customers bring laptops into the cabin. I figured that out immediately on hearing it.

The big deal is that Trump told them from which city the foreign intelligence partner of the US derived the information, i.e. which ISIL cell has been penetrated. The US has not told that to anyone among allies, for fear of compromising an ongoing intelligence operation.

Trump may have just killed the spy who with incredible bravery penetrated ISIL.

But if Trump had wanted to slip the Russians this information, he could easily have done so indirectly, through back channels, using some of his private bag men.

He cannot understand the concept of classified information or the consequences of revealing sources and methods.

Despite the attempt to whitewash all this by National Security Adviser H. R. McMaster, it is clear that a serious violation was commited by Trump.

Trump is not fit to be president, as a matter of temperament. But his temperament was on full display before the American public and they voted for him anyway, so those voters deserve him.

I can’t let another irony go by. The intel officials who leaked all this to the Washington Post were doing exactly what Edward Snowden did. The WaPo editorial board, despite having itself published some Snowden revelations, has called for him to be jailed. Would they like to call for these leakers to be jailed, too? Or are only some leaks good and others bad.

Another irony is that Snowden is not proved to have endangered any US intelligence assets, whereas we now know that Trump has certainly endangered that of an ally. Snowden made his revelations to protect the US constitution from the American deep state. Trump made his to show off to Lavrov, sort of the way he would boast of his sexual prowess to a night club date.

We have the best intelligence.