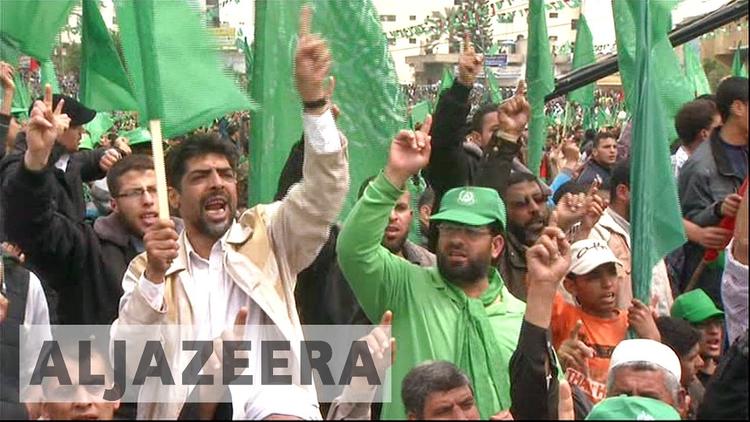 BETHLEHEM (Ma’an) — The Hamas movement announced its new charter Monday evening, presenting an acceptance of a Palestinian state along the 1967 “Green Line” border, while rejecting any legitimacy of “the Zionist entity,” in reference to the state of Israel.

“Hamas rejects any alternative to the full and complete liberation of Palestine, from the river to the sea. However, without compromising its rejection of the Zionist entity and without relinquishing any Palestinian rights, Hamas considers the establishment of a fully sovereign and independent Palestinian state, with Jerusalem as its capital along the lines of the 4th of June 1967, with the return of the refugees and the displaced to their homes from which they were expelled, to be a formula of national consensus,” the charter read.

The acknowledgement of the 1967 borders came as a vast departure from the group’s previous stance, which held that “all Palestinian land is sacred; there can be no end to the conflict with Israel.”

Despite the change, the office of Israeli Prime Minister Benjamin Netanyahu released a statement regarding the charter, calling it a “smoke screen,” according to Israeli news daily Haaretz.

“We see Hamas continuing to invest all of its resources not just in preparing for war with Israel, but also in educating the children of Gaza to want to destroy Israel,” the statement said.

The charter went on to emphasize the importance of Jerusalem as the Palestinian state’s capital and the importance of the Al-Aqsa Mosque to Palestinians and Muslims, saying that “the occupation’s plots, measures and attempts to judaize Al-Aqsa and divide it are null, void and illegitimate.”

The group maintained their stance on the issue of the Palestinian refugees, saying that the right of return is an “inalienable” and “natural right, both individual and collective.”

“The Zionist project is a racist, aggressive, colonial and expansionist project based on seizing the properties of others,” the charter said, in reference to Israel, adding that “it is hostile to the Palestinian people and to their aspiration for freedom, liberation, return and self-determination.”

Hamas maintained the legitimacy of armed resistance against the occupation, thought it accepted other forms of nonviolent resistance as well, saying that “managing resistance, in terms of escalation or de-escalation, or in terms of diversifying the means and methods, is an integral part of the process of managing the conflict.”

In another departure from the group’s previous charter, written in 1988, Monday’s charter Hamas affirmed that the Israeli-Palestinian conflict “is with the Zionist project not with the Jews because of their religion.”

The charter also mentioned Hamas’ positions regarding the Palestinian political process, and the Ramallah-based, Fatah-led Palestinian Authority (PA), which has seen a years long conflict with Hamas worsen in recent weeks, with Hamas leaders on Sunday accusing the PA of putting into action a “big plan” aiming to “eliminate the Palestinian cause.”

“Hamas affirms that the role of the Palestinian Authority should be to serve the Palestinian people and safeguard their security, their rights and their national project,” the charter said, while simultaneously calling for free and fair national elections.

After the PA announced the elections at the end of January would be scheduled in both the West Bank and the Gaza Strip, Hamas — the de facto ruling party of Gaza — promptly rejected the plan, saying that elections should only take place after the more than decade-long rivalry between Hamas and Fatah came to an end and reconciliation was achieved.

The Islamic Jihad movement joined Hamas in the boycott, and more recently, the leftist Popular Front for the Liberation of Palestine (PFLP) suspended its participation in elections in protest of the violent repression of recent demonstrations at the hands of PA security forces in the occupied West Bank.

The most recent attempt to hold local elections came after elections scheduled to be held in October were postponed, following backlash over a PA Supreme Court ruling to exclude the Gaza Strip from the elections altogether.

Prior to their cancellation, the municipal elections had been set to be the first in the Gaza Strip in a decade, after Hamas’ victory in the 2006 vote erupted into a violent conflict between Hamas and Fatah, as both groups attempted to take control of the besieged coastal enclave.