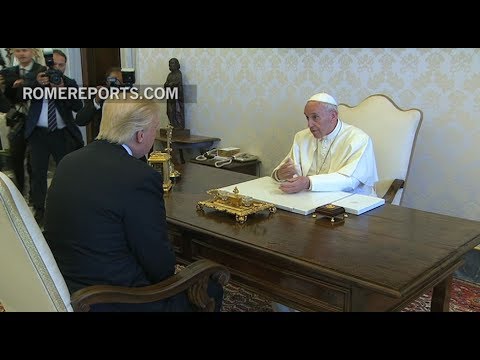 Pope Francis gave Donald J. Trump a going away present after their meeting on Wednesday. It was a copy of his Encyclical on the challenge of climate change, Laudato Si’, mi Signor,”Praised may you be, my Lord.”

This document begins with a paean to Saint Francis, which celebrates the natural world as a revelation of God rather than as a set of resources to loot and exploit and deplete.

“The urgent challenge to protect our common home includes a concern to bring the whole human family together to seek a sustainable and integral development, for we know that things can change.”

The key words here are ‘family,’ ‘sustainable’ and ‘development.” Francis is making it clear that humanity is all one family and that he is not advocating any sort of Luddism or ecological escapism. He wants development– scientific advance and economic improvement. But he wants it to be accomplished in a sustainable manner.

“Regrettably, many efforts to seek concrete solutions to the environmental crisis have proved ineffective, not only because of powerful opposition but also because of a more general lack of interest. Obstructionist attitudes, even on the part of believers, can range from denial of the problem to indifference, nonchalant resignation or blind confidence in technical solutions. We require a new and universal solidarity.”

Francis considers the challenge of acting to prevent debilitating climate change. He warns that we cannot sit back and just hope for a technological fix. New technologies are key, of course. But he points to powerful opposition and also to public apathy. The opposition can interfere with technology, as with those states, like Florida, that levy punitive taxes or fees on solar panels in an attempt to keep people hooked on fossil fuels.

The answer to both obstructionism (stemming from greed) and apathy is solidarity, is standing together across the social categories.

When he gave Trump this work, Pope Francis was aware that Trump is a major climate obstructionist. He is nevertheless appealing for human solidarity in the face of a dire threat. Believers don’t give up on people.

“Some forms of pollution are part of people’s daily experience. Exposure to atmospheric pollutants produces a broad spectrum of health hazards, especially for the poor, and causes millions of premature deaths. People take sick, for example, from breathing high levels of smoke from fuels used in cooking or heating. There is also pollution that affects everyone, caused by transport, industrial fumes, substances which contribute to the acidification of soil and water, fertilizers, insecticides, fungicides, herbicides and agrotoxins in general. Technology, which, linked to business interests, is presented as the only way of solving these problems, in fact proves incapable of seeing the mysterious network of relations between things and so sometimes solves one problem only to create others.”

Millions of people, the Pope says, are killed every year by air pollution. The seas are in danger of a mass die-off of marine life because of acidification. An ecology is a dense network of inter-relationships, he underlines. Trying to address one problem (e.g. transportation emissions) may only create others if a broad, holistic approach is not taken. Electric cars, e.g., are only able substantially to reduce emissions if the power plants that provide their electricity are not run on coal.

“A very solid scientific consensus indicates that we are presently witnessing a disturbing warming of the climatic system. In recent decades this warming has been accompanied by a constant rise in the sea level and, it would appear, by an increase of extreme weather events, even if a scientifically determinable cause cannot be assigned to each particular phenomenon. Humanity is called to recognize the need for changes of lifestyle, production and consumption, in order to combat this warming or at least the human causes which produce or aggravate it.”

Pope Francis notes the near unanimity of scientists on the danger of human-made climate change. Extreme weather and sea level rise are among the dangers. We have to stop emitting so much carbon dioxide, and that will require changes in our styles of life.

But above all it will require a conscience and dedication and solidarity.

Trump is a little unlikely to get it. But the point of publicly bestowing on him this gift is that the Pope hopes the rest of us will.