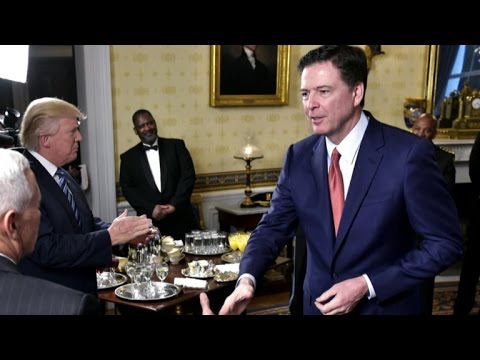 “Donald Trump wanted to stop the FBI investigation, which is the definition of obstruction of justice,” says Sen. Bernie Sanders.

President Donald Trump’s threat also follows differing reports of what occurred during a dinner between him and James Comey just before the FBI director’s firing. (Photo: Getty)

The possible existence of memorandum penned by former FBI Director James Comey in the immediate wake of a dinner he had with President Donald Trump earlier this year is being treated Tuesday night as an explosive development if its version of events, specifically that the president asked the chief of the bureau to drop the investigation into national security adviser Michael Flynn, is verified.

First reported by the New York Times, the memo—which journalist Michael S. Schmidt did not see himself but which a source, identified as a “one of Mr. Comey’s associates,” read aloud selected portions—is Comey’s account of the dinner meeting with Trump just a day after Flynn’s resignation in February. As the Times reports:

“I hope you can let this go,” the president told Mr. Comey, according to the memo.

The documentation of Mr. Trump’s request is the clearest evidence that the president has tried to directly influence the Justice Department and F.B.I. investigation into links between Mr. Trump’s associates and Russia. Late Tuesday, Representative Jason Chaffetz, the Republican chairman of the House Oversight Committee, demanded that the F.B.I. turn over all “memoranda, notes, summaries, and recordings” of discussions between Mr. Trump and Mr. Comey. Such documents, Mr. Chaffetz wrote, would “raise questions as to whether the president attempted to influence or impede” the F.B.I.

While the White House “denied the version of events in the memo,” the Times reports that Comey shared it among high-level FBI associates, part of a “paper trail Mr. Comey created documenting what he perceived as the president’s improper efforts to influence a continuing investigation.”

And while it could be seen as one person’s version of events against another, Schmidt notes that an “F.B.I. agent’s contemporaneous notes are widely held up in court as credible evidence of conversations.”

Under increased scrutiny already for his firing of Comey and the explanations given for the abrupt ouster, the latest revelations only served to increase the political heat now facing President Trump.

“Donald Trump wanted to stop the FBI investigation, which is the definition of obstruction of justice. We need a special prosecutor,” tweeted Sen. Bernie Sanders (I-Vt.) in response to the developments.

Sen. Angus King (I-Maine) called it a “very serious matter” and though previously “reluctant” to utter the phrase, told CNN‘s Wolf Blitzer on Tuesday night that impeachment of Trump should now be on the table “because obstruction of justice is such a serious offense.”

Earlier on Tuesday, as Common Dreams reported, a new Public Policy Polling survey showed that for the first time more Americans support impeachment proceedings against Trump than oppose them.

Other members of Congress used the word “impeachment” with less apparent reluctance than Sen. King:

If reports about #ComeyMemo are true, the president committed obstruction and this is grounds for impeachment. https://t.co/XVoRj1ntdP

In addition to the letter sent to the FBI requesting relevant documents, Chaffetz—a member of Trump’s own party who so far has been criticized for not standing up to the president over alleged ethical breaches and conflicts of interest charges—made it clear Tuesday night that he was ready to use the Oversight Committee’s authority to secure information on this matter. The committee, Chaffetz tweeted, “is going to get the Comey memo, if it exists. I need to see it sooner rather than later. I have my subpoena pen ready.” Here is the copy of the letter (pdf) Chaffetz sent to the FBI’s Acting Director Andrew McGabe on Tuesday.

Rep. Adam Schiff, a Democrat from California and the ranking member of the House Intelligence Committee, also indicated he would utilize all the power at his disposal to obtain the reported memo.

“Today’s allegations that the President urged Director Comey to drop the investigation of Michael Flynn are among the most disturbing to date,” Schiff said in a statement. “Following shortly on the heels of the President’s admission that he raised his own potential liability at a dinner with the Director and at a time when the Director was concerned about keeping his job, the allegations paint an alarming portrait of a President potentially interfering with, or worse, obstructing, the progress of the Russia investigation.”

“If there are notes of these meetings,” he continued, “they should be provided to Congress immediately – subpoenaed if necessary – and Director Comey should be brought back to testify before Congress without delay. Finally, this report further strengthens the case for the appointment of a special counsel in the Russia investigation to ensure that prosecutorial decisions are fully insulated from any White House’s effort to interfere.”