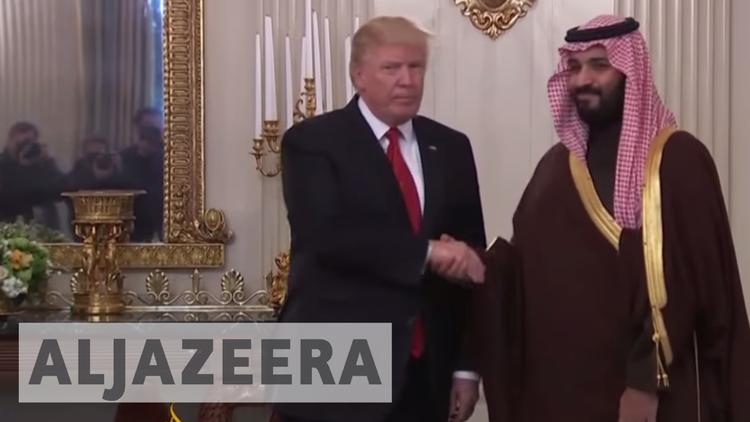 Trump left Friday afternoon for Saudi Arabia, where he will be feted with steak and ketchup by the Saudi monarchy and will deliver an address on Islam written by a far right wing notorious hater of Muslims. What could go wrong?

Saudi Arabia is a relatively small country with a citizen population probably around 20 million (they claim more but they only had 6 million in the mid-1970s, so do the math). I’m excluding guest workers. So they are actually in the neighborhood of Taiwan, Sri Lanka, Romania and Syria and actually smaller than Cote d’Ivoire.

Their claim to fame and power is therefore their vast oil riches, not their demographic power. Saudi Arabia pumps about 10 percent of all the oil produced every day in the whole world, which makes it a ‘swing’ producer, able to influence prices and to punish rivals like Iran that depend on high prices because of their much bigger populations (Iran’s population is about 80 million, about 4 times that of the Saudis). How big your population is matters for military affairs, since it tells you how big an army you can field.

Saudi Arabia is locked in a regional struggle for power with Iran in the Near East, which it is losing. Lebanon, Syria and Iraq have all gone into Iran’s column. All had been Saudi clients in the past.

Despite its oil trillions, Saudi Arabia cannot take on Iran head to head. It would lose very badly.

So Riyadh wants to enlist Trump in its struggle with Iran. And the Saudis are willing to swallow just about any insult from Trump in order to coax him into their regional fight.

Did Trump blame the Saudi monarchy for 9/11? Yes.

Did Trump blame the Saudis for refusing to step up to fight ISIL (ISIS, Daesh)? Yes.

All that is water under the bridge from the Saudi point of view. They even expressed approval of his Muslim ban.

What does the Arabic press think about all this?

The liberal al-Wafd in Egypt explained Trump’s journey to Saudi Arabia, Israel and the West Bank by citing National Security Adviser H. R. McMasters, who said that the trip has three goals: To underline the role of the US on the world stage, to build relations with world leaders, and to send a clear message to America’s friends and the followers of the three major world religions.

Mamoun Abu Amir writes in Arabi 21 that one of the motives for Trump’s visit is to reassert US hegemony over the Middle East as a superpower. Abu Amir argues that the Obama administration had turned its back on the Middle East and thrown a scare into regional powers that Washington was abandoning them to their own devices. (I think he is implying that Russia saw an opportunity to assert itself in the region because of Obama’s signals that he was not interested0. Trump, he says, wants to repair that power vacuum.

In contrast, Libya’s al-Wasat says that one of Trump’s goals in his prospective speech on Sunday to over 50 Muslim political leaders that Saudi Arabia has invited to hear him speak in Riyadh is to restore good relations with the Muslim world after his visa ban targeted six Muslim nations (including Libya). The speech apparently will argue that Muslim-majority countries have a duty to tamp down extremism and develop a peaceful vision of Islam.

The speech is said to be written by a far right wing notorious hater of Muslims, Stephen Miller, and while the Saudis can be depended on to spin it positively, it could given enormous offense to the 1.8 billion Muslims in the world, depending on how it is handled.

I very much doubt that Trump thinks his visa ban, which he is pursuing, is any kind of bar to good relations with the world’s some 55 Muslim-majority countries.

Al-Wasat also argues that Trump is attempting to shore up Saudi Arabia versus Iran, and that is probably true.