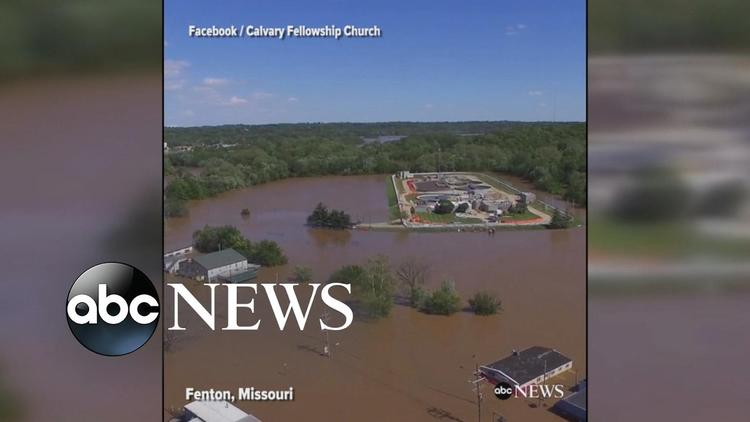 Via | The Watchers: Watching the World Evolve and Transform | – –

Parts of Missouri and Arkansas are experiencing historic flooding after a powerful storm produced deadly tornadoes, strong winds and heavy rain, leaving at least 20 people dead and dozens injured. Although flooding in some areas already reached historic levels, this event is still not over as another storm is set to drop heavy rain on already soaked Missouri, Arkansas, Oklahoma, Illinois and Indiana through the rest of the week.

Hundreds of roads were closed in Missouri, Arkansas and Illinois over the weekend as dangerous weather system rolled in with strong winds and heavy rain. Some areas saw as much as 280 mm (11 inches). The rain caused a sudden rise in rivers, some of which already reached historic levels before the next round of heavy rain hits the region. The nation’s biggest rivers are flooding, too.

“This is a historical crest. The levees weren’t designed for overtopping,” Randolph County Judge David Jansen said. “When they go, we’re going to have a wall of water pouring out.” On Wednesday, the levee on the Black River at Pocahontas failed and water gushed into the town.

Significant flooding is expected by the end of the week on the Mississippi River south of St. Louis, Missouri, including the towns of Cape Girardeau, Missouri, and Cairo, Illinois, as the massive amounts of water move downstream. Forecasters say the Mississippi River at Cape Girardeau is on track to crest at just over 15 m (48 feet) on May 6, which would be a near record.

Several points on the Missouri River in eastern Missouri are expected to rise 3 m (10 feet) above flood stage or higher by the end of the week.

St. Louis County officials say 200 homes along the Meramec have been damaged in the flooding and another 1 500 are potentially in harm’s way.

Residents of West Alton (population 500), 32 km (20 miles) north of St. Louis on the Missouri River are being asked to evacuate today as authorities fear a breach of a nearby levee.

The flooding has forced Missouri transportation officials to close Interstate 55, along with other major routes Wednesday, effectively cutting off St. Louis from any roads to the southeast.

According to Missouri transportation officials, I-55 closed at 12:00 local time Wednesday after rising water levels on the Meramec River inundated numerous roads. MoDot says the roads will remain closed for the remainder of the week. A 92-km (57 miles) stretch of I-44 from central to southern Missouri is also closed, along with a 37-km (23 miles) stretch in suburban St. Louis.

Along the Meramec River, in suburban St. Louis, thousands of sandbags are protecting homes and businesses in Eureka, and authorities fear a breach on a levee in nearby Valley Park where the river crested at just over 13 m (43 feet) on May 2, just shy of a record.

“After flooding smashed records that had stood for over 100 years, more heavy rain is headed toward the Ozarks and mid-Mississippi Valley, bringing a threat of renewed flash flooding and adding to already swollen rivers and reservoirs,” says weather.com senior meteorologist Jon Erdman. So far, 14 flooding records have been broken and several more are expected in the coming days, Erdman said.

Via The Watchers: Watching the World Evolve and Transform