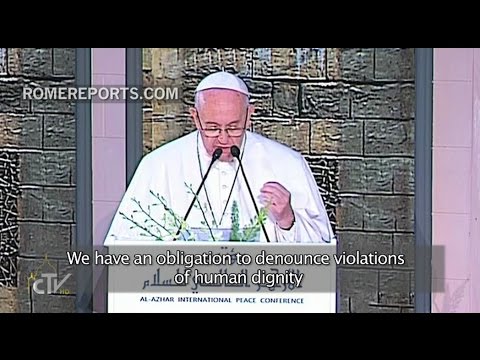 Dr. Kamal Boraiqa is a lecturer at al-Azhar University and a member of al-Azhar Center for Dialogue, the al-Azhar Observer for Combating Extremism, and the Egyptian Family House. With a PhD from al-Azhar in Islamic Studies, he has served as an imam at the Santa Rosa Islamic Center in the United States and as a visiting scholar at the UK’s Birmingham University Center for the Study of Islam and Muslim-Christian Relations, and is a member of the African Union steering committee to link policy makers and religious leaders. Jayson Caspar asks him about Pope Francis’s visit to Egypt in late April and his meeting with the Grand Imam of al-Azhar.

CASPER: Dr. Kamal, as an al-Azhar scholar, what aspects of Pope Francis’ visit and speech resonated with you the most, especially in terms of your responsibilities in dialogue?

BORAIQA: The meeting itself was a message to the whole world that the three heavenly religions – Islam, Christianity, and Judaism – are against violence, fanaticism, and radicalism. One who contemplates the speeches of Pope Francis and Sheikh Ahmed al-Tayyib will learn many lessons.

First, that faith is incompatible with violence, for violence is the negation of every authentic religious expression. Religious leaders are called, therefore, to unmask the violence that masquerades as purported sanctity and is based more on the “absolutizing” of selfishness than on authentic openness to the Absolute. We have an obligation to denounce violations of human dignity and human rights, to expose attempts to justify every form of hatred in the name of religion, and to condemn these attempts as idolatrous caricatures of God. Holy is his name, he is the God of peace.

Religion, however, is not meant only to unmask evil. It has an intrinsic vocation to promote peace, today perhaps more than ever. This is done through teaching the younger generations, because education becomes wisdom if it draws out of men and women the very best of themselves, in contact with the One who transcends them and with the world around them, fostering a sense of identity that is open and not self-enclosed.

Sincere dialogue is the only alternative to civilized encounter, lest we are left with the incivility of conflict. Wisdom seeks out the other, overcoming the temptation to rigidity and closed-mindedness. It is open and in motion, at once humble and inquisitive. It values the past and sets it in communication with the present, within suitable hermeneutics.

Pope Francis demonstrated this when opened his speech with “As-Salaam Alaikum.” This traditional Muslim greeting in Arabic means, “Peace be upon you,” and reflects his great respect and appreciation of the Muslim faith.

But he followed up also with a practical call. He said that in order to prevent conflicts and build peace, it is essential that we spare no effort in eliminating situations of poverty and exploitation where extremism more easily takes root. He also spoke forcefully about blocking the flow of money and weapons to those who provoke violence.

CASPER: How does al-Azhar contribute to the fight against radicalism?

BORAIQA: Al-Azhar’s strategy to combat radicalism is both local and international. Its system of education is built upon layers and layers of exchange through dialogue and the acceptance of difference of opinion and interpretation. Al-Azhar’s moderate curricula teaches and encourages the proper understanding of Islam that is far away from extremism. It reflects the true spirit of Islam and the essence of Islamic heritage in both rationality and rhetoric.

Spiritually, al-Azhar embodies Islamic moderation and tolerance, the two fundamental characters of the three monotheistic religions in general. The institution promotes its knowledge and culture throughout the world, without prejudice or interest but for the benefit of mankind.

Al-Azhar comprises 83 faculties and colleges that teach Arabic, Shari’ah, and modern sciences, including medicine, engineering, pharmacy, jurisprudence, and propagation. The number of students enrolled in the university in both undergraduate and post graduate studies is about 500,000, including about 40,000 international students from 66 countries. Millions of students have graduated from Al-Azhar University, and they have greatly enriched its scholarship in the religious and modern sciences.

Al-Azhar sponsors peace emissaries to many countries throughout the world in collaboration with the Muslim Council of Elders, an initiative established on July 19, 2014. The council is headed by the Grand Imam to promote peace, human values, and the tolerant principles of Islam. In Africa and Asia al-Azhar is considered the first Islamic haven, due to the role it plays in teaching and preparing students, scholars and future imams.

But al-Azhar also plays an important role in communicating with the West, sending scholars and high-level delegations to actively participate in academic and dialogue conferences to highlight the moderate image of Islam. The openness to all world religions sends a message that the teachings of Islam are against exclusivism. We teach our students that diversity is a Divine Law and that religious freedom is the basis of a healthy relationship of respect and sincerity.

CASPER: What specific steps have been taken recently with terrorism seemingly on the rise?

BORAIQA: We launched a very important initiative to combat extremism: The Al-Azhar Observer for Combating Extremism. It is an electronic-based center that monitors everything written about Islam in international circles, including newspapers, magazines, periodicals, research centers, and websites. Languages include English, French, German, Spanish, Persian, and Urdu. Other languages including Chinese, Turkish, and Russian are planned to be included soon.

The Observer aims to correct the misconceptions raised against Islam. It develops a counter-narrative against terrorist movements, which are bringing the world to chaos in the name of religion. The Observer spares no effort to protect Muslim youth and new Muslim converts from falling prey to terrorist groups which exploit terms like Jihad, Hijra (Migration), and Bay‘a (Oath of allegiance) to deceive them.

How does interreligious dialogue take place between Muslims and Christians in Egypt? Does it reach the grassroots?

Dialogue takes place on a daily basis as Muslims and Christians peacefully coexist with each other. They are citizens who enjoy equal rights and obligations. And at the level of religious leadership the relationship is very strong, deeply rooted in their hearts.

One of the most important initiatives is the Egyptian Family House. It was launched as a proactive step following the criminal attack against the Lady of Salvation Church in Baghdad. Then, following the bombing of the Two Saints church in Alexandria on January 1, 2011, the Sheikh of al-Azhar called for the union of the crescent and the cross. The Egyptian Family House comprises Al-Azhar, the Coptic Orthodox Church, the Coptic Catholic Church, the Evangelical Church, and the Anglican Episcopal Church. It also includes number of prominent unaffiliated figures, Muslim and Christian specialists in the fields of civilization, religion, history, sociology, law, Shari‘ah, and education.

The goals of the Family House are to preserve the Egyptian identity, to restore Muslim and Christian values, to focus on the common ground between Muslims and Christians, to mutually respect and understand our differences, to enhance the values of citizenship and tradition, and to strengthen the distinctive features of Egyptian culture. Through these it is engaged in the rephrasing of Islamic-Christian religious discourse.

It also aims at preserving the social fabric of the people of Egypt in coordination with government. Violence and strife must be rejected fully, not only to solve current problems, but also to uproot them fully and prevent future occurrence. The Family House calls for enforcing the law and holding accountable those responsible for the crimes, which target our whole nation. There is frank discussion of chronic and thorny issues, as well as the obvious sectarian problems. It searches for decisive solutions and is mandated to present them to officials.

Six months ago there was a meeting between al-Azhar and the World Council of Churches, and the of WCC suggested that there should be international branches affiliated to Egyptian Family House, as they believed the initiative has been very successful.

CASPER: Al-Azhar has been criticized for being unable to reform religious discourse. Is this warranted?

BORAIQA: It is true al-Azhar has been criticized, and we responded to this criticism. A committee worked for two years to renew the education curriculum in accordance with current circumstances and the requirements of modern change. We have held many training sessions for imams to help them renew their religious discourse, in order to present a simple, clear, and unsophisticated message.

Finally, will the visit of the pope make a difference in Egypt and the region?

The meeting of the Pope and the Grand Imam will bring more peace and foster interreligious dialogue all over the world. They have affirmed that religion is against violence and shedding blood. Their message is very powerful and will affect followers of all religions.

Jayson Casper is a writer and researcher based in Cairo. He serves as local correspondent for Christianity Today and blogs regularly on Egyptian politics, religion, and culture at A Sense of Belonging. Jayson has worked previously in Mauritania, Jordan, and Tunisia, and holds an M.A. in Islamic studies from Columbia International University.

ROME REPORTS in English: “Pope in Al-Azhar: Violence is the negation of every authentic religious expression”