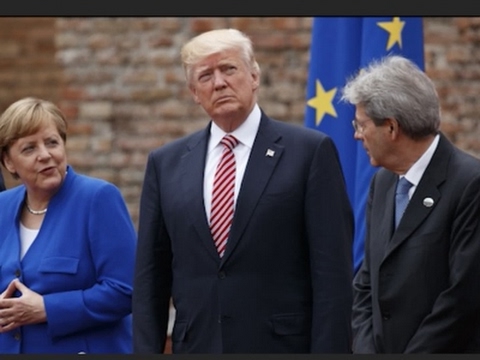 Trump bombed at the G7 summit in Italy. Despite an “intense” discussion with Germany, France and the others, who made it clear as sunshine that they wanted the US to meet its Paris Climate obligations, Trump refused to join in the issuance of a joint statement on the issue.

The communique on climate change said,

““Understanding this process, the heads of state and of government of Canada, France, Germany, Italy, Japan and the United Kingdom and the presidents of the European Council and of the European Commission reaffirm their strong commitment to swiftly implement the Paris Agreement.”

The US, obviously, is missing.

German Chancellor Angela Merkel is quoted as saying, “The entire discussion about climate was very difficult, if not to say very dissatisfying.”

Worse, Axios is reporting that close associates of Trump are saying that he has decided to pull out of the Paris Agreement.

This move would open the US to punitive tariffs, and possibly lawsuits, as well as boycotts (affecting tourism and investment). Worse, it will make it impossible for the world to keep global warming to 2 degrees C./ 3.6 degrees F.

Trump managed to infuriate India by blaming it for inaction on climate. Actually India just cancelled a big batch of planned coal plants and is implementing solar and wind like crazy, with carbon emissions reductions far more ambitious than those of the US.

Meanwhile, back in the real world, a citizens’ lawsuit against Exxon-Mobil for for violations at its Baytown facility just prevailed.