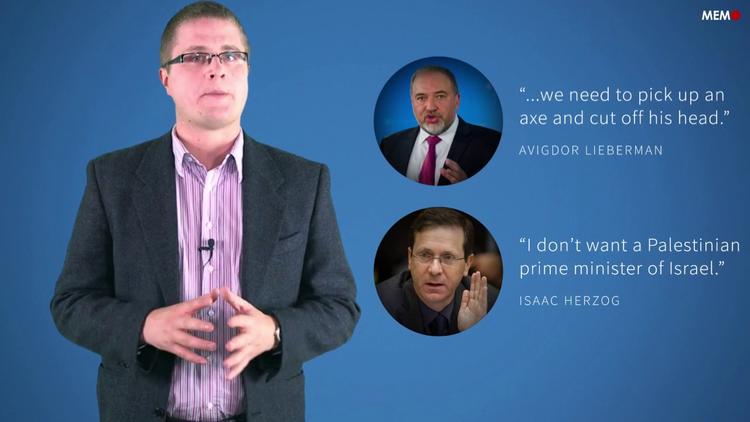 BETHLEHEM (Ma’an) — An Israeli cabinet committee approved a contested bill on Sunday seeking to enshrine Israel’s status as a Jewish state into the country’s central legislation, sparking concern the heightened discrimination Palestinians would face should it become law.

The Ministerial Committee for Legislation voted unanimously to move the “Jewish State” bill — which is also being referred to as the “Nationality” or “Nation State” bill — to a preliminary vote in the Knesset, Israel’s parliament.

It would also revoke Arabic’s status as an official state language, despite 20 percent of Israeli citizens being Palestinians, downgrading it to “special status in the state” while stating that “its speakers have the right to language-accessible state services.”

Meanwhile, Israeli news outlet Ynet reported that other sections of the bill addressed Jerusalem as the capital of Israel, illegal Jewish settlements, the status of holy sites, and non-Israeli Jews’ right to obtain Israeli nationality.

Proponents of the bill aim to have it pass into Israel’s Basic Law — the body of legislation which effectively stands as Israel’s constitution.

Bills need to go through three rounds of votes in the Knesset before they can become law.

Knesset member Avi Dichter, who first proposed the legislation, hailed the bill as “critical” given Palestinian and international opposition to Israel for its violations of international law, framing such condemnations of Israel as anti-Jewish sentiment.

“The Palestinian aspiration to eliminate the Jewish people’s nation-state is no longer secret,” Ynet quoted him as saying. “The State of Israel, which demands of its enemies to recognize it as the nation-state of the Jewish people and justifiably asks its supporters in the world to back this demand, needs to be able to declare in its highest legislative level that it proudly maintains this identity.”

Ayman Odeh, the head of the Arab Joint List, a coalition of political parties representing Palestinian citizens of Israel, denounced the bill on social media as “crushing the rights of minorities.”

“This Nationality bill is the tyranny of the majority, turning us into second-class citizens, and this time making it legal,” Odeh said.

Haaretz quoted Zehava Galon, the chairwoman of the left-wing Zionist Meretz party, as saying that the bill amounted to “a declaration of war against Israel’s Arab citizens and against Israel as a democratic and properly governed society,” using the Israeli term for Palestinian citizens of Israel.

Israel and its supporters have long claimed that Israel’s insistence on being recognized as a Jewish state was not different from other countries’ national identities, without elaborating on how the enactment of policies to maintain and privilege a Jewish national religious identity was compatible with equal rights for all people under Israeli civilian and military rule regardless of religion.

Rights organization Adalah has tallied at least 76 Israeli laws that already discriminate between Jewish and Palestinian citizens of Israel.