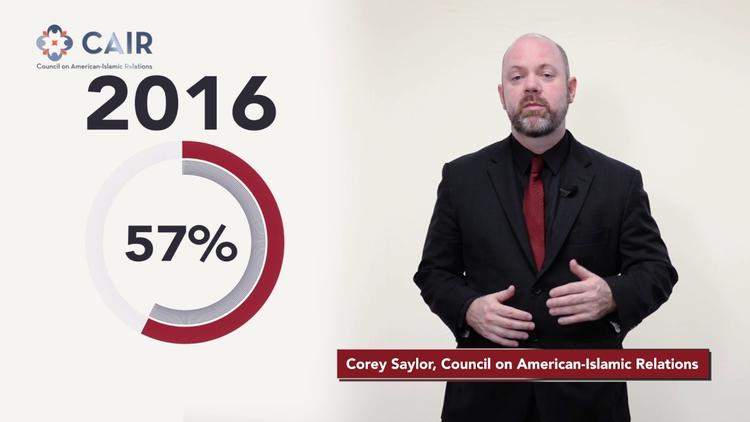 Anti-Muslim hate crimes in the United States rose by a staggering 57 percent in 2016, according to a new report released Tuesday by Muslim civil rights group Council of American Islamic Relations, CAIR.

The report, titled “The Empowerment of Hate,” found that Muslim bias incidents rose by 65 percent between 2014 and 2016. During the same period, CAIR found out the hate crimes targeting Muslims spiked 584 percent.

Corey Saylor, the co-author of the report and director of CAIR’s department that monitors and combats Islamophobia, said the report reflects a disturbing trend of rampant Islamophobia in the U.S.

“This report shows not only that anti-Muslim bias incidents have increased sharply, but also that there is a disturbing trend toward the increasing use of violence against American Muslims and those perceived to be Muslim,” Saylor said in a statement.

Just after U.S. President Donald Trump completed his first 100 days in office, CAIR announced a 1,035 percent increase of anti-Muslim bias incidents at the U.S. border. While there were 67 reported incidents with U.S. Customs and Border Protection last year, with 17 of them between January and March, in the first three months of 2017 that number rose to 193 incidents.

On April 6, a 26-year-old Muslim UC Berkeley student was taken off a Southwest Airlines flight at the Los Angeles International Airport. The student was heard saying a customary Arabic phrase, “Inshallah,” which translates to “God Willing.”

On March 20, a suburban Muslim couple was ejected from a United Airlines flight at the Chicago O’Hare International Airport along with their three young children. The parents had requested an additional strap for their youngest child’s booster seat.

Both of these hate incidents against Muslims are a part of a much larger issue plaguing the U.S. in the age of Trump.

“What this shows is that the problem has existed for some time, and within the first 100 days of Trump’s presidency, we have seen a magnification of the problem,” Saylor added.

“I think for a long time the government has securitized Islam and looked at all Muslims as a potential threat, as indicated, by some of the (religious) questioning.”

According to CAIR, the FBI accounted for 62 percent of all the federal government entities instigating hate crimes in 2016. Transport Security Agency followed with 15 percent, Customs and Border Protection accounted for 12 percent, U.S. Citizenship and Immigration Services accounted for 4 percent and U.S. Immigration and Customs Enforcement was responsible for 2 percent.

The report also stated that in 2016, the most prevalent trigger leading to an anti-Muslim bias incident was the victim’s ethnicity or national origin, accounting for 35 percent of the total incidents. Nearly 16 percent of incidents occurred as a result of a woman wearing a headscarf. An individual’s name and place of worship also contributed to an anti-Muslim bias incident.