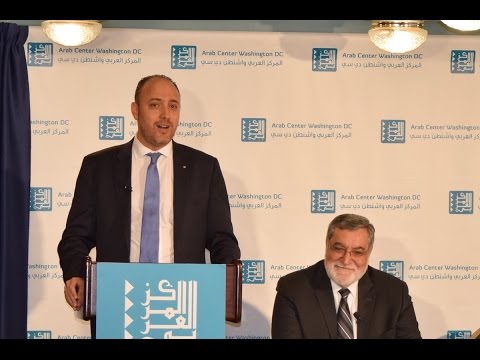 RAMALLAH (Ma’an) — Palestinian factions in the central occupied West Bank city of Ramallah have called upon the Palestinian people to partake in a “Day of Rage” on Tuesday, during the planned visit by US President Donald Trump to the occupied Palestinian territory.

Trump left the US for his first trip abroad as commander-in-chief on May 19, arriving in Saudi Arabia on Saturday. He is scheduled to arrive in Israel on Monday, to meet with Israeli President Reuven Rivlin and Israeli Prime Minister Benjamin Netanyahu in Jerusalem.
The following day, Trump will meet with Palestinian President Mahmoud Abbas in the occupied West Bank city of Bethlehem, and then stop in occupied East Jerusalem, to visit the Church of the Holy Sepulcher and the Western Wall — reportedly to become the first sitting US president to visit the contested holy site that stands adjacent to the Al-Aqsa Mosque compound.
Trump first met with Abbas in Washington D.C. earlier this month, and with Netanyahu in February.
In a statement released Saturday titled: “A call for unity and assimilation with our brave prisoners,” Ramallah-based Islamist and nationalist factions urged the public to join rallies to express their rejection to the resumption of peace talks between the Palestinian Authority and Israel under US sponsorship.
The statement called for a three-hour strike on Sunday from 11 a.m. to 2 p.m., and for a general strike on Monday in the occupied West Bank, the besieged Gaza Strip, and Israel, to coincide with Trump’s visit.
Members of the Higher Follow-up Committee for Arab Citizens of Israel have affirmed their support for the strikes, initially called for by the Palestinian national committee set up to support a mass hunger strike in Israeli prisons that entered its 34th day on Saturday.
The hunger strike’s committee also called for activists in West Bank villages and rural areas to continue blocking off roads to traffic, particularly for Israeli settler vehicles, in an expression of solidarity for the hunger strike.
Popular protests demanding that Israel meet the demands of hunger strikers have erupted into violent clashes with Israeli forces, most recently on Friday, since the strike began more than two months ago.
Signatories of the statement also highlighted that they opposed the United States’ bias with the Israeli occupation, as a growing number of Palestinians have expressed disillusionment to peace talks brokered by consecutive US administrations that have simultaneously pledged billions in military aid to Israel.
Trump’s plans for his first diplomatic visit abroad have been fraught with the chaos and controversy that has come to define his presidency.
Reports emerged last week that Trump’s national security adviser H.R. McMaster twice refused to say whether the Western Wall is part of Israel, while American diplomats at the US consulate in East Jerusalem told representatives of Netanyahu’s office that the Western Wall was part of the occupied West Bank, and refused to hold talks with Israeli officials about arrangements for Trump’s planned visit to the site.
During a visit to Israel on Monday, Trump’s pick for US Ambassador to Israel, pro-settler David Friedman, chose the Western Wall as his first stop, later to meet with the Israeli prime minister who called Jerusalem the “eternal capital of the Jewish people” when greeting Friedman.
Meanwhile, on Friday, the White House circulated a video publicizing his itinerary that showed a map of Israel that cut out the occupied Palestinian territory, including East Jerusalem, and the occupied Golan Heights.
While Israel occupied the territories in 1967, Israel extended Israeli law to the Golan Heights, but does not claim sovereignty in the West Bank — though many right-wing Israeli lawmakers continue to advocate the West Bank’s annexation and consider illegal settlements built on Palestinian land part of Israel.
The map angered Israeli officials, and likely also alienated Palestinians for listing Trump’s schedule in both West Jerusalem and the occupied West Bank as under the heading “Israel.”
The US president’s visit also comes after Trump’s provision to the Russians of intelligence Israel gave the US in secret, to the outrage of Israeli intelligence officials.
Trump has remained largely elusive regarding his policies on Israel-Palestine, as he has expressed his support for Israel’s illegal settlement building on Palestinian territory in the past, while also making statements critical of settlements following his inauguration.
Trump has repeatedly expressed his desire to bring about a peace deal between Israel and the Palestinian Authority, and claimed that coming to a peace agreement is “not as difficult as people have thought over the years.”
While the Israeli government is believed to have strategically stalled legislation that further entrenched Israel’s illegal settlement expansion until after Trump’s inauguration, owing to the belief among Israeli leaders that right-wing policies would be more easily implemented under a Trump presidency, Trump’s unpredictable nature has left Israeli authorities and Palestinian leaders alike unsure of his actual stance on the conflict.