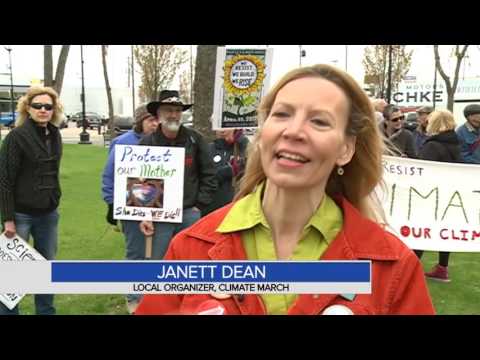 As the thousands of foot-weary protesters look back on the Peoples Climate March in Washington, D.C. — and its scores of sister marches around the country — one question will no doubt be foremost on their minds: How can a march, or indeed any other action they take, force a reversal in the world’s hurtle to climate doom?

After all, a single march, no matter how large, is not going to force President Trump and his administration of fossil-fuel company executives and climate-change deniers to reverse course. They have already cancelled the Environmental Protection Agency’s Clean Power Plan, authorized drilling and mining on public lands, and gutted regulations that protect local people and environments against the extraction of fossil fuels. He has cleared the way for the Keystone XL and Dakota Access pipelines. His allies in Congress are whetting their knives to gut the Clean Air, Clean Water and Environmental Policy Acts. The fossil fuel industry is lining up for permits to build new infrastructure that will accelerate global warming and threaten local environments to boot.

The unintended consequence of these actions has been to isolate Trump and his allies from the American people. This is revealed in polls taken since Trump’s election. Half of Americans call climate change a “major threat” to the nation’s well-being. Three-quarters of voters said carbon dioxide should be regulated as a pollutant and 70 percent support strict carbon dioxide emission limits on existing coal-fired power plants — even if it raises the cost of electricity. Meanwhile, 81 percent said the United States should use more renewable energy, whereas only 3 percent said it should use less. The public believes — by a factor of six to one — that the U.S. government is doing “too little” rather than “too much” to protect the environment. Moreover, 61 percent of voters disapprove of Trump’s handling of the environment, which is higher than his disapproval rating for all other issues, including health care and immigration.

This overwhelming rejection of Trump’s assault on the climate and general embrace of a shift toward climate protection opens the way to massive support for the global nonviolent constitutional insurgency which has been undermining the very legitimacy of those destroying the earth’s climate. The immediate goal of the climate insurgency is the same as that enunciated by the nations of the world in the Paris climate agreement: to prevent more than 1.5 degrees Celsius additional warming.

The fundamental strategy for the nonviolent constitutional insurgency is to withdraw the support of the people from climate destruction. It uses nonviolent direct action — or civil disobedience — to express the popular refusal to acquiesce in the burning of fossil fuels and to force a transition to climate-safe energy. It defends such action as both the right and the duty of the people — and proclaims climate destruction to be illegal and unconstitutional. It mobilizes both those who are willing to engage in activities the authorities claim to be illegal and the wider population who support these objectives. It seeks to create an irresistible momentum of escalating popular action for climate protection.

While many have been stricken with pain and foreboding by Trump’s climate agenda, such feelings haven’t paralyzed them from taking action. Even before Trump’s inauguration, EPA workers put their jobs at risk to expose Trump’s climate lies. Shortly after Trump’s election, the Illinois legislature passed the Future Energy Jobs Package, which will invest at least $500 million in new solar — especially community solar — and energy efficiency programs targeted at low-income communities, combined with job training for work in the solar industry. Chicago also recently announced that it will transition all of its municipal buildings and operations to 100 percent clean, renewable energy by 2025.

Meanwhile, 23 state and local governments vowed to fight Trump’s “Energy Independence” executive order in court. A U.S. district court judge ruled that there is a constitutional right to a stable climate. Leading corporate executives urged the United States not to leave the Paris climate agreement; Maryland has just banned all fracking; and anti-pipeline campaigns are under way in Texas, Louisiana, Georgia, Pennsylvania, Massachusetts and New Hampshire. Saturday’s Peoples Climate March represents a culmination and celebration of this activity, as well as the launch of its next phase.

Despite the emergence of the climate insurgency and the overwhelming public support for climate protection, Trump and his fossil fuel allies control virtually all the levers of governmental power. The Peoples Climate March is unlikely to stop that, but it can be part of building the momentum for a movement that can defeat Trumpism and set us on the course for a transition to a fossil-free economy. Here are three strategic elements — drawing from my new book “Against Doom: A Climate Insurgency Manual” — that may be crucial in the aftermath of the march.

The United States is in the midst of an unprecedented wave of civil resistance to Trump and Trumpism — what movements of resistance to tyranny elsewhere have called “social self-defense.” It includes millions of aroused individuals and community members, social movements, non-profit advocacy organizations, lawyers and judges, scientists and librarians, and much of the Democratic Party. Many advocacy groups have climbed out of their issue silos to cooperate in the Trump resistance. And there is powerful synergism between those taking direct action in civil society and those challenging Trump and his allies within the political system. The Trump resistance has so far blocked the Muslim and refugee ban, forestalled the repeal of the Affordable Care Act, stymied the building of Trump’s wall with Mexico, and successfully pushed back against much of the rest of the Trump agenda. In the process they have significantly undermined public and institutional support for both the Trump administration and its right-wing Republican allies.

Fortunately, the climate movement is already reaching out and supporting the other elements of the Trump resistance. For example, Michael Brune, executive director of the Sierra Club, says “The Sierra Club stands in solidarity with Muslims, refugees, immigrants, people of color, women and all those threatened” by the Trump administration. “Protecting our communities and our environment go hand-in-hand, and everyone who values a just and free America should continue to resist hateful actions” like the Muslim ban. An open letter from environmental and climate justice organizations declares, “We support workers who choose to walk off their jobs on May 1 because we know that the fight to protect land, water, air and soil is inseparable from the fight to protect the life and dignity of workers, migrants, and communities of color.”

Conversely, climate protection can provide a major unifying and empowering focus for social self-defense. Much of the Trump resistance is rightly focused on his attacks on particular groups: immigrants, Muslims, women, people of color and many others. But climate change is a universal threat that creates a universal common interest. As such, it can be a unifying thread among the many diverse elements of the Trump resistance. Climate protection has wide support across almost all the constituencies that need to come together to break Trump’s power. For example, the policy platform of the Women’s March stated that “our environment and our climate must be protected” and that “our land and natural resources cannot be exploited for corporate gain or greed.”

The need to protect the climate is in direct contradiction to Trump’s “America First” rhetoric. There is no way that America can survive, let alone thrive, unless climate change is reduced, and there is no way that can happen without international cooperation and agreement. Creating millions of jobs protecting the climate is also the most effective way to address the economic needs of American workers that Trump exploited to win the presidency. A program of jobs for climate and justice can be the centerpiece of an alternative economic program that can draw away support from Trump’s false promises.

2. Impose the transition to fossil freedom.

Of course, Trump is trying to expand fossil fuel infrastructure. But the Trump era will see massive resistance to his plans. One harbinger: In early April, an advance guard set up camp in Eagle Butte, South Dakota to lay the groundwork of resistance to Trump’s plan to revive the Keystone XL pipeline.

Climate protection requires not only a halt to new fossil fuel infrastructure, but also a planned transition to a fossil free economy. That means not just changing energy sources, but changing every institution that utilizes energy. Ultimately, it means using forests, farms and other “sinks” to begin withdrawing greenhouse gasses from the atmosphere.

This transition requires planning. The climate movement should insist that every institution — from schools, churches, states and municipalities to the federal government — develop and immediately start to implement a climate action plan that will eliminate fossil fuel burning by 2050 at the latest. Portland, Oregon just announced a plan for transitioning to 100 percent renewable energy by 2050. Such plans must include protection for workers and communities whose livelihoods may be adversely affected by the transition to a fossil-free economy — not to mention strategies to use that transition to reverse the economic, racial, generational and gender inequality and injustice that the Trump administration seems to be advancing.

Local and state fossil freezes and climate action plans can lay the groundwork for — and prove the feasibility of — a national fossil freeze and climate action plan. In the lead-up to the Peoples Climate March Sens. Bernie Sanders and Jeff Merkley plan to release a Clean Energy for All bill “to transition away from fossil fuel sources of energy to 100 percent clean and renewable energy by 2050.” Trump can’t stop us from implementing the elements of such a plan at a state and local level.

3. Claim a stable climate as a constitutional right.

Two days after the election of Donald Trump, Federal Judge Ann Aiken ruled in a case now dubbed Climate Kids v. Trump that “the right to a climate system capable of sustaining human life is fundamental to a free and ordered society.” A stable climate system is quite literally the foundation of society, “without which there would be neither civilization nor progress.” In short, the right to a stable climate is protected by the U.S. Constitution’s guarantee of the right to life and liberty.

Climate protection advocates do not need to wait for the legal process to play out in order to argue that the Aiken decision establishes that the people have a right, grounded in the U.S. Constitution, to force the government to protect the climate. If the courts won’t enforce that right in time, it is up to the people to do so.

The climate movement can assert that it is not just advocating an environmental policy, but fighting for a basic human and constitutional right for all people. It thus makes defiance of Trump’s climate agenda not just opposition to bad policies, but the basis for a constitutional insurgency that defines climate-destroying policies and the activities that enforce them as criminal acts that the people have a right, indeed a duty, to resist.

While it is impossible to know what future course the Trump era will take, we do know that the future of the planet and its people depend on resisting and overcoming the president’s anti-climate agenda — and reversing it to eliminate fossil fuels. If the global nonviolent climate insurgency succeeds, Trump and Trumpism will be remembered by historians as a failed attempt to prevent humanity from protecting itself against climate catastrophe. And the Peoples Climate March may well be recorded as a historic marker on the way to a fossil-free future.

This article was originally published on Waging Nonviolence .