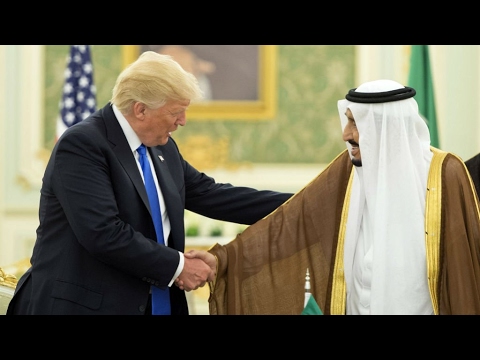 The first stop on Donald Trump’s first trip as U.S. president was to Saudi Arabia.

That was no accident.

His decision was surely based on the fact that the alliance between Saudi Arabia and the United States is one of the foundations of American foreign policy in the Middle East.

While Trump was there, Saudi King Salman awarded him the kingdom’s highest civilian honor. Trump came bearing gifts of his own in the form of US$110 billion worth of military equipment, some of which had been approved by Barack Obama.

The Saudi’s extravagant welcome of Trump indicates a significant warming of relations that had cooled under Obama and indicates a return to the two countries searching for linkage rather than leverage. Yet, this is far from the first time that the U.S. and Saudi Arabia have shifted their perceptions of each other.

The partnership between Saudi Arabia and the U.S. emerged in 1930 with the formation of what would become the Arabian American Oil Company. Shared economic and security interests have kept the two partners close over the decades. This in spite of the dramatic differences in the way the two countries are governed.

The Kingdom of Saudi Arabia became vital for American defense during World War II when Saudi Arabia joined the Allies. During the Cold War, Saudi Arabia acted as a key support for preserving for the free flow of oil and keeping Soviet influence out of the region. Along with support for Israel, these concerns constituted the three pillars of American Middle East policy.

But contradictions between these objectives has insured that the Saudi-American relationship has never been trouble-free.

From boycotts to Iran

One troubled period was the Saudi leadership of the 1973 oil boycott against the U.S. in retaliation for American support for Israel in the October War.

Yet, as soon as that crisis was resolved, cooperation between the two countries returned. Then as now, Saudi Arabia spent a great deal of its oil wealth on U.S.-made weapons. Over the years the Saudis have bristled at American support for Israel, but not enough to undermine the relationship.

In 1979, an Islamic revolution overthrew the pro-American shah of Iran. This transformed Iran from an ally into America and Saudi Arabia’s biggest regional adversary. While most analysis points toward the inherent conflict between Saudi’s hard-line interpretations of Sunni Islam with Iran’s post-1979 revolutionary Shi’ite activism, it is as easy to see the two states jockeying for geopolitical power.

Saudi has pressured the United States to weaken Iran – especially its nascent nuclear program. This was famously captured when Wikileaks released a 2008 correspondence from then-King Abdullah, pressing the U.S. to “chop the head off the snake” and attack Iran.

The other source of tension between the U.S. and Saudi Arabia stems from the blow-back from their Cold War cooperation. Joint American and Saudi support for Sunni Islamist militants to combat the Soviet occupation of Afghanistan resulted in the birth of al-Qaida when warriors returned home after the Cold War. These militants attacked both the Saudi and other Middle Eastern regimes despite being an outgrowth of official Saudi Islamic ideas. The militants turned to attack the U.S. and the West. The alliance between the U.S. and the Saudis continued after the fall of the Soviet Union around a new pillar of U.S. policy, counterterrorism.

Under the Obama administration, Saudi–American relations weakened because of the administration’s disengagement from the Middle East. Relations particularly deteriorated in the wake of the Arab Spring protests in 2011. My research has shown that the Saudis, and other monarchs, rode out the wave of protests better than republics in the region.
Repression at home has also led to a more adventurous foreign policy abroad by supporting proxies in Syria and Yemen without coordination with the United States.

With the ascension of King Salman in 2015 and the rise of his son, Deputy Crown Prince and Defense Minister Mohammad bin Salman, this accelerated.

Previously, the Saudis supported groups in the Syrian civil war that evolved into the Islamic State terrorist group. Since 2013, however, the Saudis have turned toward supporting other, more “moderate” groups who will cooperate with the U.S. At the same time, their demand for the fall of Syria’s President Bashar al-Assad has not wavered. This has led the Syrian civil war to become a new venue for Saudi-Iranian rivalry, as Iran is one of the Syrian president’s biggest supporters.

The Saudis also have directly intervened militarily in next-door Yemen to prevent the Houthi movement, a Shi’ite group from northern Yemen, from emerging victorious in that country’s civil war. The Saudis accuse Iran of supporting the Houthis. The Saudi-led campaign, however, has not resulted in a quick victory. Instead it is contributing to another stalemated humanitarian emergency in the region. The Trump administration may find congressional opposition to the arms deal because of the Saudi’s possibly using these arms in Yemen.

But what truly annoyed Saudi leaders about Obama was his forging the agreement between Iran, the U.S. and other partners to limit Iran’s nuclear program in return for the lifting of economic sanctions. The Saudis felt that the agreement was made over their objections.

Candidate Trump promised to rip up the Iran agreement, but as president he has not done so yet. If he still intends to do so, that promise may have become harder to keep after Iranian voters voiced their support for the agreement by reelecting President Hassan Rouhani.
The Saudis are hoping that President Trump continues to walk back his campaign trail “Islam hates us” talk to focus instead on shared cooperation against Iran and “Islamic extremism.”

However, it still remains to be seen if it is Trump’s new claim that “we are not here to tell other people how to live” or if it is the old-fashioned art of the (arms) deal that has warmed up the U.S.-Saudi relationship.