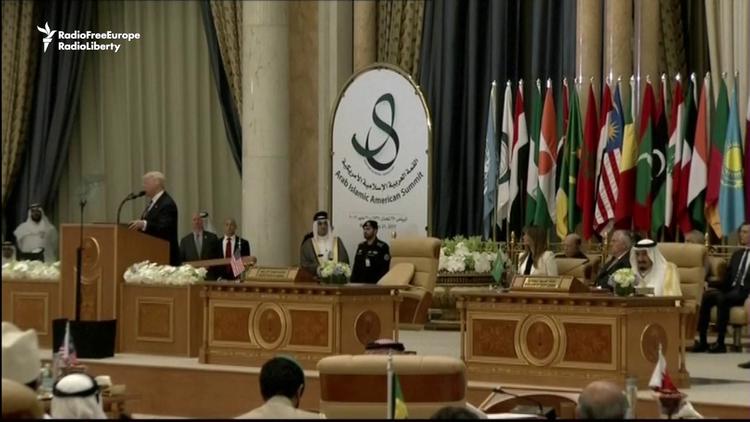 Trump’s speech on Islam, written by notorious Islamophobe Stephen Miller, who used to organize Orwellian Two Minutes Hate sessions against Muslims at Duke, is just as bizarre as everything else Trump does.

Miller-Trump imply, as has become common in right wing American discourse, that Muslims have a peculiar problem inasmuch as they produce terrorists. What do they think the Ku Klux Klan is? I estimate that people of European Christian heritage polished off as many as 100 million persons in the 20th century and that Muslims may have killed 2-3 million.

Trump seems to think that pumping $110 bn in new shiny weapons into a volatile Middle East will lead to peace! If there is any sure correlate of war, it is massive purchases by one regional power of new armaments. You have to use them while you have the advantage or your rivals also acquire them.

“Egypt was a thriving center of learning and achievement thousands of years before other parts of the world. The wonders of Giza, Luxor and Alexandria are proud monuments to that ancient heritage.
All over the world, people dream of walking through the ruins of Petra in Jordan. Iraq was the cradle of civilization and is a land of natural beauty.”

This is sheer Orientalism, an allegation that Pharaonic Egypt, Nabatean Jordan and Sumerian and Babylonian Iraq were great civilizations but that once Islam came, they went downhill. Miller-Trump do not know about al-Azhar University in Egypt being among the oldest in the world (George Makdisi argued it was *the* oldest). They don’t know about Harun al-Rashid’s House of Wisdom where Greek philosophy was debated in Arabic by the Abbasid caliph and his court sages at a time when Charlemagne was trying to learn to scratch out his name. They don’t know about the Abbasid invention of algebra or of Omar Khayyam’s use of geometry to solve algebraic equations. The only compliment they give Islamic civilization is that Dubai and Riyadh have skyscrapers, which is surely the blind spot of a Realtor.

Miller-Trump sweep up national resistance movements like Hamas and Hizbullah with al-Qaeda! Neither of these would exist if the Israelis hadn’t a) expelled hundreds of thousands of Palestinians from their homes in 1948 and then come after millions of their descendants and militarily occupied them in 1967 and b) if the Israelis had not launched a brutal war of aggression on Lebanon in 1982 and attempted to occupy permanently 10% of Lebanese territory. The Shiites of south Lebanon *liked* the Israelis before 1978. The 1982 invasion killed 10,000-20,000 people and involved indiscriminate artillery barrages and aerial bombing of Beirut, which Usama bin Laden alleged helped inspire him to destroy some American skyscrapers.

Designating Hizbullah a terrorist organization but not doing so to the armed Israeli squatters who routinely attack Palestinians in their own homes is typical of everything that is wrong with US policy in the region. Attacking civilians is always wrong (and is cowardly). But Hizbullah in 1984-2000 mainly attacked other soldiers, who were illegally occupying Lebanese Shiite land.

As for Yemen’s Houthis, they are not a creature of Iran, which has relatively little to do with them. They are rural Zaydi Shiites who resented Saudi attempts to proselytize them, marginalize them, and make them Wahhabis. You’ll never have peace in Yemen as long as you don’t recognize legitimate Zaydi interests.

For Trump to attack Iran, which just had a popular election where the electorate bucked the choice of the Leader, from Saudi Arabia, an absolute monarchy where the populace have no rights, is weird.

The American Right is deeply implicated in radicalizing Muslims. Afghan Islam was radicalized by the Reagan jihad against the Soviet Union. Eisenhower and Reagan both attempted to enlist Saudi Arabia’s Wahhabism against Communism. Most Palestinians were secular or mainstream until the Israelis cultivated Hamas as an alternative to the PLO.

Trump wants to site a center for combating extremist ideology in Saudi Arabia! The Wahhabi form of Islam practiced in that country encourages extremist ideology! The Saudis took the practice of takfir or excommunicating Sunnis and Shiites to the next level. In the 19th century they even excommunicated the Ottoman Emperor!

If the Saudis want to combat extremism, they have to formally abjure this unfortunate heritage of Wahhabism and roundly condemn the unilateral branding of people as non-Muslim when they maintain that they are Muslims. (In the Sunni and Shiite mainstream, takfir or excommunication of a Muslim is rare and disapproved).

Contemporary radical extremism in the Muslim world is founded on a few basic principles:

1. takfir or the excommunication of other Muslims for being insufficiently puritanical, anti-democratic, anti-Western, etc.

2. exalting holy war or “jihad” as they understand the word (it does not mean holy war but merely struggle for the faith in the Qur’an) to a basic pillar of the religion.

3. Willingness to commit suicide to blow other people up. Suicide is forbidden in mainstream Islam just as it is in Catholicism.

Saudi Arabia has to condemn all three– excommunication, the militarization of jihad, and homocidal self-sacrifice.

So Miller-Trump are barking up entirely the wrong tree here, as you would expect from completely ignorant people sticking their bare hands into about 50 bee hives.

Then they condemn Iranian intervention in Syria but don’t mention that Saudi Arabia backed the radical terrorist group Jaysh al-Islam that had genocide against Syria’s Shiites on their minds. Nor do they admit that without Hizbullah, Homs would have fallen to al-Qaeda in Syria (which the US has tacitly supported; yes) and could have been used to cut off Damascus to resupply.

Any fair-minded and knowledgeable person in the Middle East would read this speech as a farrago of Orientalist prejudice against Muslims, coddling of Wahhabis, slamming of Shiites, and continued rank unfairness toward the Palestinians in favor of holding the Israelis completely blameless for their massive ethnic cleansing campaigns, which are ongoing.

That terrorism can be addressed by vague words and by failing to address the underlying social causes is a non-starter. That war and violence can be tamped down by unfairly taking one side in a sectarian struggle or by flooding massive new arsenals into the region are the pipedreams of bigots who cannot face their own bigotry.