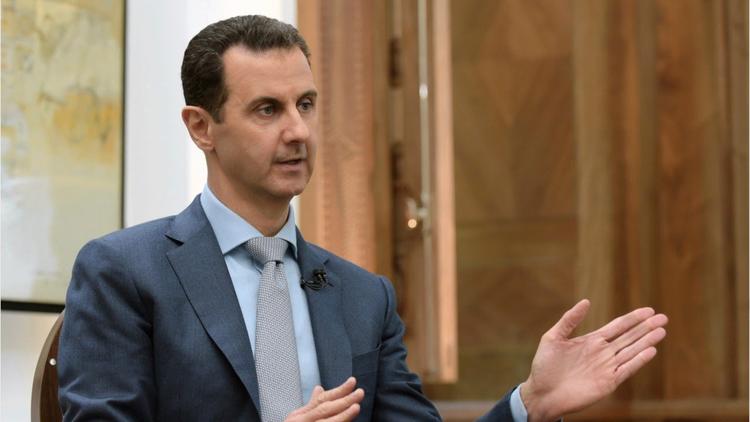 The Trump administration is making noise about striking Syria, on the grounds that Damascus is planning to use poison gas again.

Any further attacks done to the people of Syria will be blamed on Assad, but also on Russia & Iran who support him killing his own people.

The statement is said to be from “the White House” but is otherwise not characterized. Why does the White House think this? Why did Trump himself not tweet about it if it is coming from him?

The last time Syria stood accused of using poison gas on a rebel population, killing some 70 civilians, Trump fired 59 Tomahawk missiles at the air base from which the poison-bearing aircraft took off, on April 6. It was a largely symbolic action, having no real impact on the regime or even the operation of the Shu`ayrat air base.

The odd thing about the breathless announcement late Monday was that earlier that day Secretary of State Rex Tillerson phoned his Russian opposite number, Sergei Lavrov to discuss tamping down the violence in Syria. They want to extend the current ceasefire in some areas, which did in fact lead to less violence in the “deconfliction zones.

As for the substance, it is true that the Syrian Arab Army sometimes uses chemical weapons on the battlefield. As I understand it, many units of the army have chem auxiliaries for those instances where they might be overrun by the enemy. The army at one point was down to 35,000 troops, from a peak of 300,000 before the civil war. It is evil and against international law, but some of their officers think the only way to level the playing field is to release some gas. The Syrian Conquest Front, formerly the Nusra Front, which held the territory where the early April incident took place, is not known (unlike ISIL) have a chem capacity. The Syrian government is.

But so far the chem use by the Syrian Army appears to be occasional and ad hoc and it isn’t the sort of thing the White House could have gained intelligence about beforehand.

It is almost as if there were a faction of hawks around Trump who wanted to derail any Tillerson-Lavrov cooperation and maintain a condition of undeclared war with Russia and Iran. We haven’t heard a lot from CIA director Mike Pompeo, unlike most others in the Trump cabinet. But if I had to guess who is behind Monday’s “statement” . . .