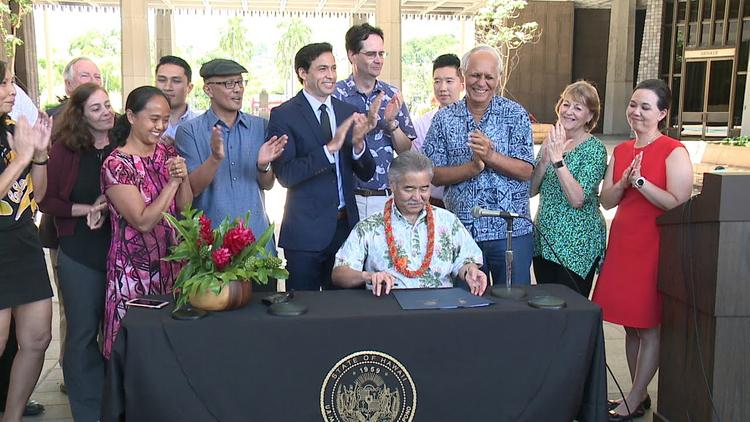 Even the limited environmental reforms of the Paris Agreements were too much for the United States.

Hawaii has broken from the White House’s abrupt exit from the Paris Agreement, becoming the first U.S. state to legislatively bring its environmental standards in line with the global deal, officials said Wednesday.

The move by state Governor David Ige comes less than a week after U.S. President Donald Trump announced the United States’ withdrawal, drawing ire from Washington’s counterparts in capitals across the world.

An overwhelming majority of scientists say human activity — including the burning of oil, gas and coal — is the main driver of rising global temperatures. However, nonrenewable fossil fuels remain the basis of the world capitalist economy’s agriculture, transportation, profit-based economic growth and ever-expanding material consumption.

Ige signed a bill Tuesday requiring officials to plan climate change responses aligning the state with the standards and goals of the Paris Agreement, primarily through the expansion of “strategies and mechanisms to reduce greenhouse gas emissions statewide” and by finding ways to better capture and store “atmospheric carbon dioxide to mitigate climate change.”

“Hawaii is committed to environmental stewardship, and we look forward to working with other states to fight global climate change,” Ige said.

The celebrity billionaire-turned-president of the United States said Thursday that the landmark 2015 climate agreement threatened millions of jobs in the U.S. and that he would start a multi-year process to withdraw from the deal, breaking from attempts by his global counterparts to strike a small compromise on economic growth for the sake of the environment.

The governors of Washington, California and New York on the same day announced the creation of a “climate alliance” of states that would remain committed to the Paris goals. Hawaii joined the next day. Nearly 250 mayors and eight more states likewise joined alliances promising to proceed with fulfilling the terms of the accord.

California Governor Jerry Brown has been extremely vocal in his criticism of Trump, accusing the former reality television star of taking a “misguided and insane course of action” and pledging that his “state is ready for battle.”

Scientists at the University of Hawaii said in April that sea-level rise driven by global warming will cause flooding of low-lying areas in the state dozens of times per year by 2050, and increase the risk of dangerous interactions between tropical storms and seasonal high tides.

However, some critics claim that limited environmental reforms such as constraints on greenhouse gas emissions are far from sufficient in terms of achieving ecological sustainability while private markets strive to achieve perpetual economic growth, including the industrialization of the Global South and electrification of undeveloped regions, thus ensuring climate-related catastrophes.