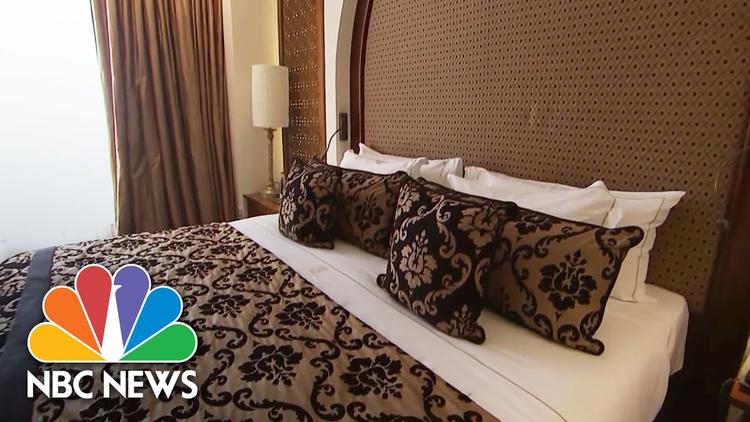 On Donald Trump’s two- day visit to Jerusalem in late May, a visit which disrupted commercial and cultural life in both the Jewish and Arab sectors of the city, the American president, his extended family, and others in his very large (or should I say Huge) entourage spent an inordinate amount of time in museums. While Trump and his associates are not known generally for their interest in art and history, Israeli officials are—as long as the art is ‘Jewish art’ and as long as the history supports the Israeli national narrative

Yad Va-shem , the Holocaust museum, was a must for Trump , as it is for all foreign dignitaries who visit “united Jerusalem.” But to the embarrassment of his Israeli hosts, who expected him to stay for at least an hour at the solemn site , Trump insisted on a short visit, one lasting no more than ten minutes. And in one of the many strange gaffes of Trump’s first overseas trip, the remarks he wrote in the museum’s visitors book were breezy at best and bewildering at worst .

“It is a great honor to be here with all of my friends — so amazing and will never forget!”

At Jerusalem’s Israel Museum Trump spent considerably more time than at Yad Vashem, and his words there seemed more carefully chosen. The many Israeli Jewish dignitaries assembled at the museum were no-doubt thrilled to hear the president praise their ‘ spirit’ with these evocations of the deep past.

“This museum where we are gathered today tells the story of that spirit – from the two Holy Temples, to the glorious heights of Masada, we see an incredible story of faith and perseverance. That faith is what inspired Jews to believe in their destiny, to overcome their despair, and to build here a future that others dared not to dream.”

Though Christians and Muslims were mentioned in passing in Trump’s speech, it was only to assure the world that these people have the freedom to worship at the holy places. That members of these religious minorities, many of whom are citizens of the state, might have a claim on the Israeli ‘spirit’ didn’t seem to occur to Trump’s speechwriters. For them, as for most Americans, ‘Israeli’ means ‘Jewish.’

In our current era of not-so- blissful ignorance, the basic fact that twenty percent of Israel’s citizens are not Jews seems too confusing for most Americans, whether they are Democrats are Republicans.

Trump’s visits to Yad Vashem and the Israel Museum will not soon be forgotten; both his supporters and his detractors made note of his every move in the Holy Land. And Trump’s interactions with Prime Minister Netanyahu and his wife Sarah, embarrassing to many Israelis because of the fawning behavior of Israel’s First Couple, has already provided rich material for Israel’s talented satirists.

But overlooked by the army of journalists, pundits and observers who accompanied Trump on his whirlwind visit to Israel, were two other Jerusalem museum stories with messages that to many liberals in Israel and the US seem ominous.

These relatively unknown museums are The Museum of Tolerance—Jerusalem , and The Friends of Zion Museum (FOZ) The first is still under construction; the FOZ opened its doors more than a year ago.

These two American-funded cultural institutions face one another across a parking lot between Zion Square and Mamilah.

The Museum of Tolerance, a branch of its Los Angeles parent institution, is being constructed on land adjacent to a Muslim cemetery.

As I reported in a 2010 Religion Dispatches article:

“For the Arabs of Jerusalem and of the rest of Israel, the construction of the Museum of Tolerance is an affront to human dignity, for it involves the desecration of a large Muslim cemetery. The cemetery lies under a parking lot constructed in the 1960s and it extends far beyond it into the area of Independence Park and into what remains of the original Mamillah cemetery. The cemetery had been in continuous use from the tenth century until the early twentieth century. Hundreds of skeletons have been exhumed from the museum construction site. Most of those exhumations were done in a six month period between November 2008 and April 2009.

If the museum project was started in 2004 why did the exhumations take place only last year? Because Israeli citizens took the case to court. Until November 2008 excavation of the site was held up by a court injunction. The Israeli High Court of Justice (the equivalent of the US Supreme Court) decided in October of that year to reject the request of the Islamic Movement of Northern Israel that the construction be halted as it constitutes a desecration of Muslim holy place. The court rejected the Islamic Movement’s petition. Work at the museum then proceeded at a furious pace. Working around the clock, the excavators exhumed the graves under the supervision of an Israeli archeologist. The number of skeletons taken out of the site numbered between one thousand and fifteen hundred. According to Gideon Sulaimani, an archeologist who worked at the site before the court injunction went into effect “They call this an archeological excavation but it’s really a clearing-out, an erasure of the Muslim past.”

While the Museum of Tolerance is a Jewish institution headed by a Rabbi, the FOZ is very much an Evangelical Christian institution –and it is headed by an American pastor.

According to its website the Friends of Zion Museum is “a once in a lifetime experience for audiences from around the world. Visitors enter a whole new world, where they meet the biblical figures, academics, businessmen, and military officials who, through their faith, have forged an everlasting bond between the Jewish and Christian peoples.”

As a Christian Zionist institution deeply influenced by the various Prophecy Movements of the Twentieth Century, the FOZ is deeply committed to a “biblical “ view of the Middle East, a view that resonates strongly with many in Trump’s evangelical voting base. And this it was thus no surprise that in honor of Trump’s Jerusalem visit the FOZ festooned the streets of Jerusalem with large posters that announced that TRUMP IS A FRIEND OF ZION.

Shalom Goldman is professor of religion at Middlebury College. He has authored numerous books, including Zeal for Zion: Christians, Jews, and the Promised Land and God’s Sacred Tongue: Hebrew and the American Imagination. His most recent book is Jewish-Christian Difference and Modern Jewish Identity.