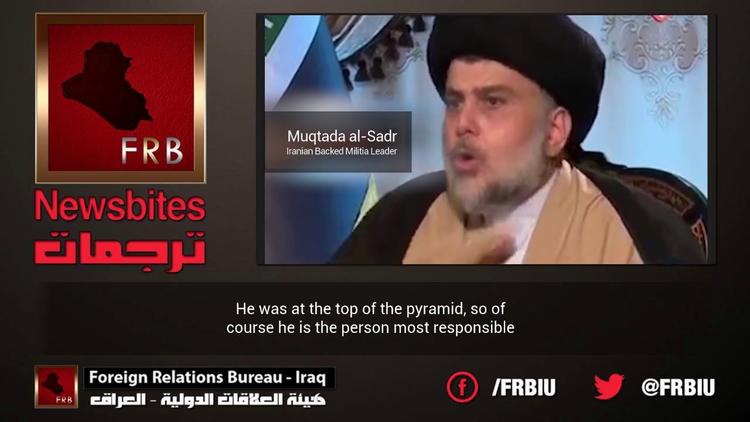 One of Iraq’s most powerful political groupings, the Sadrist movement, is trying to form a new alliance that may unite secular, Sunni and Kurdish parties. It would be a first for Iraq. But it could also be a trap.

The Sadrist movement has had a busy few months. The Iraqi political movement, which is led by the cleric Muqtada al-Sadr, has defected from the larger Shiite Muslim political alliance to which it belongs, withdrawn ministers from government, joined in popular anti-corruption demonstrations calling for political reform and now, it seems, the Sadrists are trying to form a new alliance in preparation for federal elections next year. The most interesting thing about the latter is that the Sadrists appear to want to form an alliance that does not rely on sectarian affiliations – that is, whether one is a Shiite or Sunni Muslim. It may also end up not mattering whether one is religious or not, too.

For several weeks now, the Sadrists have been holding a series of talks with secular political groups. If successful, the alliance would be the first between a religious, Shiite Muslim political group and a secular, civil-minded one.

There are obvious ideological differences between the two groups but they also have some very important things in common.

“And we have made many concessions in order to be able to do so,” Shwaileh continued. “We withdrew our ministers from the government so that the prime minister [Haider al-Abadi] was able to choose technocrats for ministers. However all the other political parties rejected this and continued to insist on the posts being filled, according to sectarian quotas.”

The meetings between the Sadrists and secular groups involve two major subjects. Firstly, their ability to form a future-proof political movement and how to compete in the next federal elections, slated to be held in 2018, with it. And secondly, how to keep up the pressure with weekly protests that take place every Friday in Baghdad and in other provinces.

There are obvious ideological differences between the two groups but they also have some very important things in common. One of the most vital is their shared enmity for Iraq’s former prime minister, Nouri al-Maliki. Not a week goes by without some senior member of the Sadrist movement criticising al-Maliki. Muqtada al-Sadr himself said in a television interview in mid-May that he would never vote for al-Maliki again because he had sold off the country.

Al-Maliki countered that by criticizing the Sadrist movement for stepping outside the Shiite Muslim alliance and going against what he called the consensus.

The secular groups also dislike al-Maliki. The latter’s hostility towards the organisers of the Friday demonstrations is well known; he used Iraq’s military to disperse the unarmed protestors and arrested many of them.

Shiite Muslim parties have held power in Iraq since 2003, winning a majority of seats in parliamentary elections in 2005, 2009 and 2014. In the past, al-Maliki had said he wanted to lead the country because of his ability to liaise with all sectors of Iraqi politics, including Sunni Muslim parties and the Kurdish ones.

But in 2018, al-Maliki has said he wants to return to power because he is supported by the Shiite Muslim alliance. Some of the Shiite Muslim militias, who started as volunteer fighters against the extremist Islamic State group but who are now a quasi-official force, say they will support al-Maliki. In particular, the militias allied with Iran say they support the former prime minister.

However, if the Sadrist movement do not take part in the existing Shiite Muslim alliance, this would mean the loss of around 30 seats and effectively, a loss of their majority.

Since April 2017, Ahmad al-Sadr, the 31-year-old nephew of Muqtada al-Sadr, has been involved in trying to build new political alliances for the Sadrist movement. During April, the younger al-Sadr has held meetings with most of the other political blocs in Iraq, including Sunni Muslim and Kurdish parties. He did not hold a meeting with the coalition led by al-Maliki.

There is no doubt that the Sadrist movement remains powerful. Muqtada al-Sadr is the only Shiite Muslim political leader who is capable of mobilizing hundreds of thousands of Iraqis within hours. Other Shiite Muslim parties, especially those with close links to Iran, are unable to do this – they may have power but it is considered to come from outside Iraq. Additionally only the Sadrist movement has leaders who remained inside the country while Shiite Muslims were being terrorized by former Iraqi leader, Saddam Hussein, a Sunni Muslim.

Today the Sadrist movement’s strength comes from three different things. Al-Sadr’s ongoing popularity with the poor Shiite Muslims of Baghdad and in the southern provinces, who are inspired by him; the armed forces the Sadrist movement can raise because of this – formerly it was the Mahdi army, now it is the Salam, or Peace, brigades; and the fact that the movement’s political wing, Ahrar, is very active at both federal and provincial level. Despite changes in the political scenery, the Sadrists have remained united.

All of these factors mean that if the Sadrist movement does manage to ally itself with civil, Sunni Muslim or Kurdish parties, it will become even more important in the next Iraqi elections – because of its new alliances and also because of its crippling withdrawal from the Shiite Muslim alliance. Any new alliance between the Sadrists and non-Shiite actors will effectively prevent al-Maliki from leading the country again. There’s only one question local analysts are still asking: Could the Sadrist movement be setting up a Trojan horse? Given more historic Sadrist ties to Iran, that possibility is also real – but only time will bring the answer.

FRBI: ” Sadr: ‘We are all responsible, but Maliki occupied the apex of the pyramid’”