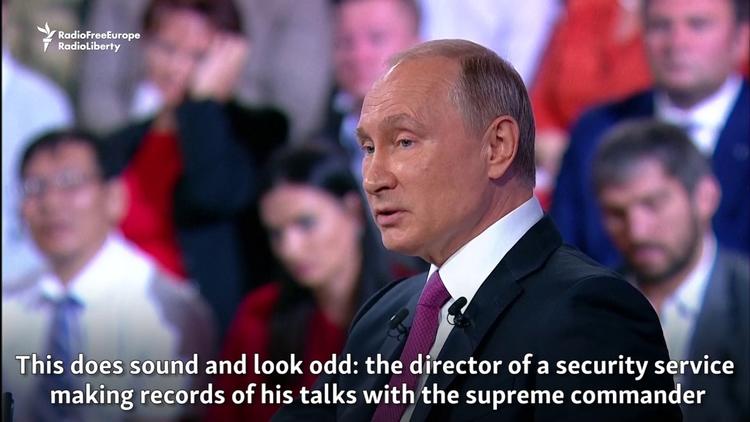 He responded to the remarks last week of former FBI director James Comey in his testimony before the senate, deploring Comey’s assertion, without offering any proof, of Russian interference in the US election.

Putin misrepresented the allegations against Russia as simply the broadcast of the Kremlin’s views, saying “We have our own opinion and we are expressing it openly. It’s not some underground undermining activity, but we are expressing our opinion.”

What is being alleged is that Russian government outlets such as RT and Sputnik deliberately spread largely false but damning stories about Hillary Clinton, which were picked up by fellow travelers such as Breitbart and other alt-Neonazi websites and then spread around to millions of unsuspecting voters via Facebook and Twitter, especially in states that might be close. The hacking of the Democratic National Committee emails and those of Clinton campaign director John Podesta was in service of generating these negative stories, and is alleged to have been coordinated with Russian intelligence if it wasn’t actually directed by it. There was, in short, a Russian government-directed disinformation campaign that aimed at voter suppression through discouraging Democrats from going to the polls.

It is a complex theory of disinformation cascade and may or may not be true. But it cannot be refuted by simply insisting on Russia’s right to broadcast the views of the Kremlin.

Putin then tried the typical propaganda trick of changing the subject, charging that the US is constantly doing propaganda abroad and funding non-governmental organizations. He said that in private conversations with world leaders, everyone complained about US interference in their politics.

The idea that the US funds non-governmental organizations to make revolutions is a conspiracy theory. The US AID and other funding agencies like NGOs because of the theory that emerged during and after the 1989 East Bloc revolutions that societies with numerous NGOs are more likely to turn and remain democratic. The local version of the Girl Scouts is not being funded in hopes they will make a coup.

Besides, Putin’s charge that the US interferes in other people’s elections (which is not untrue) does not address the questions of whether or how Putin interfered in the 2016 American election. Two wrongs don’t make a right.

Putin said he found the idea that Comey wrote down his conversations with Trump and then found a way to leak them via a friend to the press “very strange. “What is the difference between the FBI head and Mr Snowden then? In this case, he is not the special services’ head, but a rights activist who defends a certain position.”

Putin then joked, “By the way, if he is persecuted in this relation, we will be ready to give him too political asylum in Russia. He should know this.”

It is amusing to think of Comey, an information hardliner who called Ed Snowden a traitor, as himself a whistle blower. He tried to strong arm Apple into unencrypting all our phones, opening us to hackers. In this regard, Putin makes a fair point. But the rest of his remarks on this issue came across as sleazy.