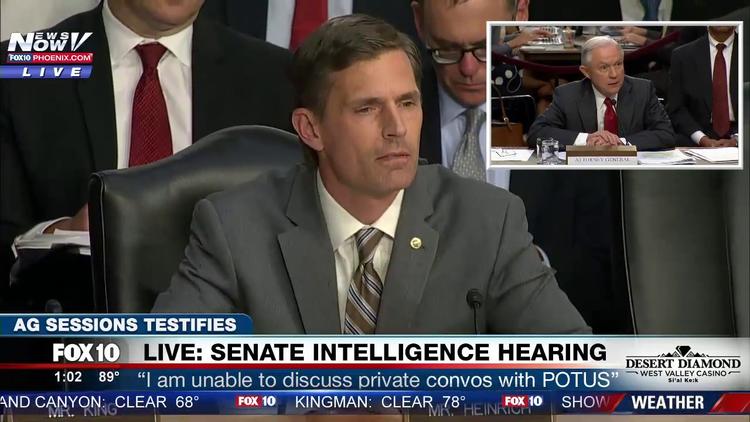 It is a crime to “corruptly” endeavor to impede a proceeding before a federal agency. The law says, “corruptly means acting with an improper purpose… including making a false or misleading statement.”

On May 9, President Trump fired Comey in a terse five-sentence letter. It said he was acting on the recommendations of Sessions and Deputy Attorney General Rod Rosenstein. Trump attached a letter from Sessions and a memo by Rosenstein. The only basis for dismissal stated in the Rosenstein memo, and adopted by Sessions, was that the FBI director had mishandled the inquiry into Hillary Clinton’s use of a private email server.

However, critics have suggested the real reason Comey was fired was to impede the FBI’s investigation of connections between the Trump campaign and Russia. That would mean Trump’s dismissal letter was a “false” or at least a “misleading” statement, and thus a “corrupt” action in violation of the law.

The most compelling reasons to suspect this are found in the president’s own words later that week. In an interview, Trump told NBC’s Lester Holt: “I was going to fire Comey… regardless of recommendation… [W]hen I decided to just do it, I said to myself, I said, ‘You know, this Russia thing with Trump and Russia is a made-up story.‘”

Then, when Sessions appeared before the Senate Intelligence Committee, he refused to answer key questions about the firing, claiming he owed a duty of confidentiality to the president.

As a scholar of legal ethics and the director of a national institute on teaching ethics and professionalism, I found Sessions’ evasion at the hearing about his May 9 letter to Trump suggests further evidence of a “corrupt purpose” for two reasons:

Sessions chaired the National Security Advisory Committee for the Trump campaign. He thus had an ethical obligation to consider the possibility that he was or could become a subject of the FBI’s investigation.

On March 2, the attorney general, under considerable outside pressure, announced he would recuse himself “from any existing or future investigations of any matters related in any way to the campaigns for President.” However, Sessions incorrectly told the Senate Intelligence Committee that he had no further ethical obligation. He went so far as to say his obligation to recuse himself did not “interfere with my ability to oversee… the FBI.”

The attorney general is the country’s top lawyer. According to mandatory ethical rules applicable throughout the country, lawyers are not supposed to provide advice if they have a conflicting personal interest. The attorney general’s willingness to ignore his ethical obligations by advising that Comey be fired raises serious questions about whether he had a corrupt purpose in writing the letter used to fire Comey.

Remarkably, neither Sessions nor Deputy Attorney General Rod Rosenstein supported their recommendation to dismiss Comey with any findings from Justice Department officials who usually investigate allegations of misconduct. The only other time an FBI director was outright fired was after a seven-month review of a 161-page report by the Justice Department’s Office of Professional Responsibility.

Neither Sessions nor Rosenstein acknowledged that Comey’s handling of the Clinton email matter was already being reviewed by the Office of the Inspector General.

Of course, Sessions should not have offered the president any advice about firing Comey. But if competent advice were to be given, it surely should have addressed whether to defer the decision until the inspector general completed his work. Neither Sessions nor Rosenstein has yet explained why they omitted reference to the inspector general’s investigation, a failure that raises further doubts about the credibility of the memos they wrote for the president.