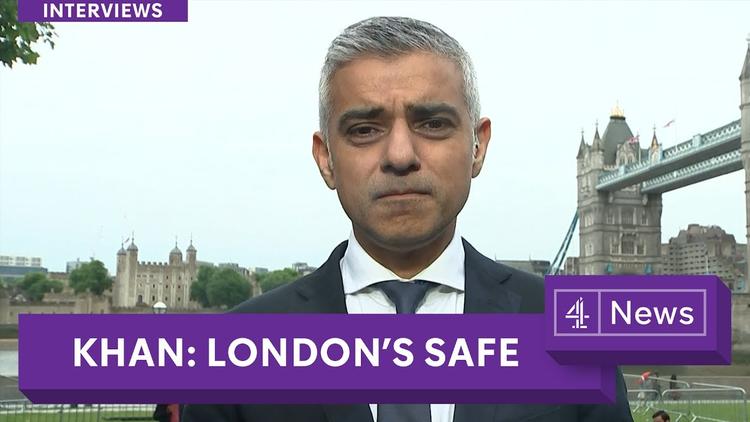 Trump’s shameful and out of context attacks on Sadiq Khan, the popular mayor of London, have only reminded us of what a boor Trump is.

Britain agrees. Khan told Channel 4 News Monday, “I don’t think we should roll out the red carpet to the president of the U.S.A. in the circumstances where his policies go against everything we stand for. When you have a special relationship it is no different from when you have got a close mate. You stand with them in times of adversity but you call them out when they are wrong. There are many things about which Donald Trump is wrong.”

Sadiq Khan did a video announcement to Londoners after the vicious attack on Saturday night by members of the radical Al Muhajiroun extremist organization. In it, he noted that he was putting extra police on the streets of the UK capital, but that the public should not be alarmed by this step. He wanted them to interpret it as added security, not a sign of extra risk.

Trump went off on Khan on Twitter, trying to make it seem as though the mayor had been playing down the seriousness of the attack. He was not.

The Irish Times quoted Khan as having said,

“London stands in defiance against this cowardly attack on our city, our people, our values and our way of life. I want to send a clear message to the sick and evil extremists who committed these hideous crimes. We will defeat you. You will not win,” he said, flanked by politicians from across party divides, police officers and leaders from different faiths.

“As a proud and patriotic British Muslim I say this: You do not commit these disgusting acts in my name. Your perverse ideology has nothing to do with the true values of Islam and you will never succeed in dividing our city.”

I don’t think it can be sufficiently underlined how important it is for the UK’s Muslim community of some 3 million persons (out of 65 million) to hear a respected public figure such as Khan speaking this way.

British Prime Minister Theresa May, who is in the midst of a hard-fought election to be determined later this week, has been put in a difficult position by Trump’s cold-blooded rudeness and attempt to grandstand on the bodies of Saturday’s victims.

Trump is widely despised in Britain and the perception that May is close to him may hurt her in the polls. So on Monday she felt constrained to distance herself from the skunk at the Rose Garden and to throw some support to Sadiq Khan:

“I think Sadiq is doing an excellent job.

“We’re working with the Mayor of London and City Hall to ensure, for example, that the transport network is able to get back up and running so that people can go about their business.

“I’ve been very clear, I’ve been very happy to say when I think President Trump is wrong – to have taken America out of the climate change agreement, the Paris agreement.

“The United Kingdom stays in it and we believe it’s an important international agreement – so I’m not afraid to say when I think President Trump is getting things wrong.”

Theresa May’s comments seem to me the biggest indictment possible of Trump as a politician. As the leader of Britain’s Conservative Party, she ought to be able to express warm support for a Republican president. That she feels she has to slam this one has everything to do with (odious) personality and little to do with policy. That as a Tory she feels she has to support a Labor mayor of Muslim heritage is breathtaking.

In turn, it is hard to see how Trump’s drunk uncle night time Twitter rants are not hurting the United States and its soft power in diplomacy.