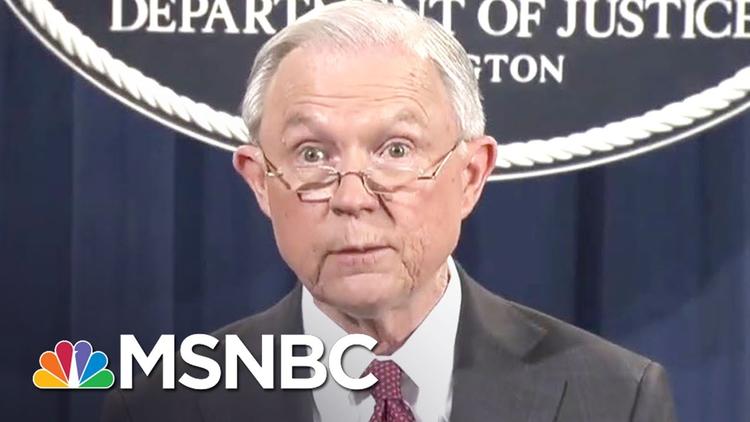 Adam Entous, Ellen Nakashima and Greg Miller at WaPo report from a US intelligence source that former Russian ambassador to the US, Sergei Kislyak, told Moscow that he had discussed campaign-related matters with Jeff Sessions twice in the summer of 2016. This revelation directly contradicts Sessions’ testimony before Congress. If the allegation is correct, Sessions is guilty of a crime, perjury, the same crime of which the Republicans in the House of Representatives impeached Bill Clinton. Only, like, Sessions may actually have committed, like, a crime.

Me, I’m angry. I’m angry because the US intel community had this information in summer of 2016 and they’re only leaking it now. You mean they could have blown the whistle on the Trump gang over the Russian contacts and they didn’t bother? It is too late now. Getting rid of Sessions won’t change anything. Trump will just appoint another stealth white supremacist.

Now, their bosses are Trump appointees and most of this stuff will be ordered suppressed.

Second, let’s acknowledge the hypocrisy of all the condemnations of Ed Snowden over leaking the *illegal* activities of the National Security Agency, and the acceptance of this leak about Sessions. Nobody is threatening the WaPo journalists with jail for publishing the information on Sessions, and nor should they. But tell me how all this is different from the Snoweden affair in form (Snowden obviously released lots more information).

Observers are pointing out that all the intel community has is Kislyak’s cables back to Foreign Minister Sergei Lavrov, not a transcript of the actual meeting. This is true. But why would Kislyak misrepresent the meetings to his bosses? Moreover, if the NSA didn’t actually record their conversations, after recording millions of innocent Americans, then we want our money back.

It should be pointed out that Sessions has trouble telling the truth about his meetings with Kislyak. First, he got the number of those meetings wrong. Now, the substance.

In the wake of the posting of Don Trump Jr.’s emails (by Don Trump Jr.) about the meeting arranged by the Agalarovs via Rob Goldstone with Natalia Vesselnitskya and several other Russians lobbying for a repeal of the Magnitsky Act, this revelation about Sessions takes on greater significance.

Russia had dozens of points of contact with Trump campaign officials in 2016 and one of Vladimir Putin’s major preoccupations was having the Magnitsky Act repealed. It allows the placing of sanctions on Russian businessmen and officials accused of major human rights violations. The Putin government is corrupt and underpinned by billionaire cronyism. Governments like that of Russia (the same is true in the Middle East) can create billionaires by granting certain licenses and smoothing the way. But this sort of corruption requires the ability to launder the money in foreign banks, which the Magnitsky Act prevents. It is therefore a major irritant to Putin’s crony capitalism.

When Congress passed the act in 2012, Putin responded by banning the adoption by US parents of Russian children. That is why Trump said he talked with Putin about adoption and that is why Don Jr said adoption was the topic for his meeting with Vesselnitskaya. “Adoption” is a code word for repealing the Magnitsky Act.

Had Hillary Clinton been elected, she almost certainly would have expanded the Magnitsky Act.

So the quid pro quo was that the FSB (Russian intelligence) and Russian white hat hackers working at least indirectly for the FSB would hack Clinton-related email accounts searching for dirt and would release the emails to the public, to help Trump win.

In turn, Trump would have Congress repeal the Magnitsky Act or order Treasury to cease enforcing it, and then the Putin cronies could again move their money around freely without fear of the US Treasury Department.

The NSA and the CIA watched all this happen in real time. The Trumpies were brazen, not bothering to use cut-outs and meeting directly with principals like Kislyak, whom any normal person would have known was under intense surveillance and had to report the meetings back home.

And they screwed us over by not revealing it. Maybe they tried to get Barack Obama to say something and the president was too much of a gentleman. If so, that was the time to start leaking, guys.

Now we’re screwed, Trump is president and it is too late. We spend like $75 billion a year on those intel agencies. And this is what we get. All the telephone calls in Jamaica are recorded. But a major international conspiracy to undermine US democracy? With that they couldn’t be bothered. Or who knows, maybe they preferred Donald to Hillary. If so, they aren’t actually very, you know, Intelligent.