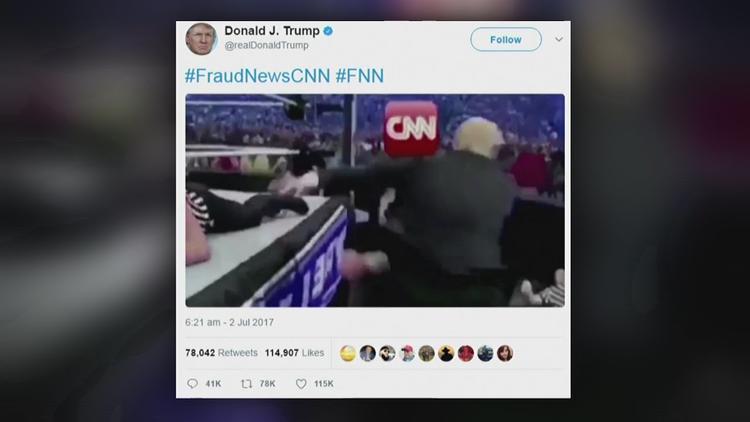 NEW YORK – Some people might have dismissed Donald Trump’s recent tweet of a video clip showing him punching the face of a man with a CNN logo on his head as yet another example of the US president’s vulgar buffoonery – unseemly, perhaps, but par for the course. But others have pointed to something more sinister – and for good reason.

Trump has consistently denigrated press coverage that is critical of his administration as “fake news,” just as he has sought to undermine the authority of the independent judiciary by branding those who disoblige him as “so-called” judges. He is in the habit of tweeting these offensive epithets directly to “the people,” a type of communication he calls “modern day presidential.” In fact, the act of undermining democratic institutions by abusing them in front of braying mobs is not modern at all. It is what aspiring dictators have always done.

This is serious. But there is something potentially even worse. Under normal circumstances, violent behavior is restrained by laws and social norms. These restraints are by no means perfect. Domestic violence often remains hidden, as do many cases of rape. And there will always be violent people who break the laws.

What is astonishing, however, and deeply disturbing, is how quickly extreme violence can erupt among people who have lived peacefully together for a long time. German Jews went unmolested by their Gentile neighbors until Nazi leaders stirred up the mobs after 1933. Christians and Muslims coexisted for centuries in Sarajevo, until Serb agitators, backed by armed forces, called for violent expulsions and murder. Hindus and Muslims who had left one another alone, or even had friendly relations, suddenly went for one another’s throats when the largely Muslim north broke away from predominantly Hindu India in 1947. Muslims lived peacefully in Burma until Buddhists, egged on recently by fanatical monks, started burning down their houses and beating them to death.

Over and over again, in societies all over the world, the civilized norms that protect us from anarchy and violence turn out to be perilously thin. Some people may be more disposed to brutality than others, but aggressive impulses can be activated with surprising ease. Petty jealousies or simple greed can swiftly turn unexceptional citizens into agents of barbarism.

One only needs to read online comments reacting to opinions expressed in perfectly respectable publications to see how much hostility exists in people’s minds. It is easy to imagine how, with a little official encouragement, animus could become action, once the normal restraints are gone.

This type of encouragement can be indirect, or vaguely worded, yet instantly understood by people itching to be mobilized. Sarah Palin is suing The New York Times for suggesting in an editorial that there was a link between a mass shooting in Arizona that nearly killed a Democratic member of the US Congress, Gabby Giffords, and a map circulated by Palin’s political action committee showing Giffords and other Democrats under stylized cross hairs.

The Times later apologized, conceding that it was not the politicians who were targeted in Palin’s campaign, but their electoral districts. Possibly. But this was probably not the way some of her more aggressive fans understood it.

Trump went much further during his campaign, when he encouraged followers at his mass rallies to attack the press verbally as “scum.” He now regularly denounces journalists as “enemies of the people,” and tells his followers to stop “fake news” from standing in his – and, by implication, their – way.

One newly elected Republican member of Congress, Greg Gianforte, took this literally and assaulted a Guardian reporter after being questioned about his views on health care. More recently, a representative of the National Rifle Association urged viewers to fight the “lies” of the mainstream media with “the clenched fist of truth.” Once again, the threat is veiled just thinly enough to be covered by constitutional free-speech protections. But self-anointed patriots can read between the lines.

So far, one important difference between today’s right-wing populists, in Europe and the US, and the fascists and Nazis of the 1930s, has been the absence of storm troopers. There is no equivalent of the brown-shirted or black-shirted thugs who were given license by political leaders to beat up their opponents, or worse.
DONATE NOW

But this, too, may be changing. James Buchal, a Republican politician in Oregon, suggested in May that Republicans should hire right-wing militia groups as security guards during Republican rallies. These gun-toting extremists, whose idea of patriotism is to regard the federal government as the enemy, are different from 1930s Brownshirts only in name. All that is needed for a politics of institutionalized violence is for such people to be given official license to unleash their most brutal impulses.

This is why Trump’s tweets are not just coarse playacting. Once the highest representatives of a democracy start stirring up violence, the mob takes over. The US is no exception: at that point, democracy will die.

Ian Buruma, Editor of The New York Review of Books, is Professor of Democracy, Human Rights, and Journalism at Bard College. He is the author of numerous books, including Murder in Amsterdam: The Death of Theo Van Gogh and the Limits of Tolerance and Year Zero: A History of 1945.