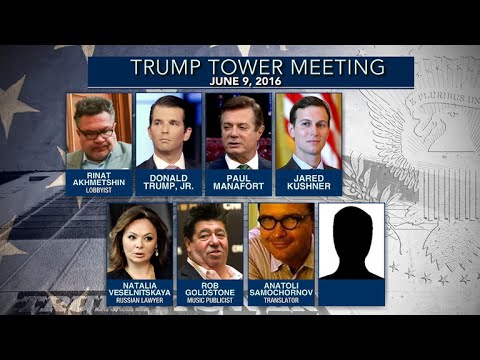 Like the Black Lodge in David Lynch’s revival of Twin Peaks, reality is twisted into strange, absurd forms in the world of Trump. He tirelessly assaults common sense with exaggerations, blatant lies, insulting tweets, and willful ignorance. Though his chip-off-the-old-liar son Donald Jr. got caught red-handed conspiring to break federal campaign finance laws against accepting foreign contributions, President Trump colluded in the initial attempt to cover up the collusion and then denied that collusion was wrong or unusual. He even blamed Obama for letting the visa-lapsed Russian lawyer into the U.S. to tempt his 39-year old “good boy” with enticing dirt on the Clintons.

Trump built his political career and now presidency with attacks on reality that combined lies, demagoguery, racism, xenophobia and scapegoating — the elements that “crystallized” into totalitarianism according to The Origins of Totalitarianism, a 1951 book by Hannah Arendt, one of the foremost political philosophers of the 20th century. A German-Jewish intellectual, Arendt fled Nazi Germany with the rise of Adolf Hitler in 1933, lived in Paris as a stateless refugee, and immigrated to the United States in 1941. Her book culminates with a description of the “living corpses” — those tortured victims who experienced the full force of totalitarian terror in concentration camps; but she initially focuses on the intermediate stages that crystallized into total domination. As if presciently remarking on Trumpism, she warns, “Never has our future been more unpredictable, never have we depended so much on political forces that cannot be trusted to follow the rules of common sense and self-interest — forces that look like sheer insanity.”

Neo-fascist Trump practices a tyrannical rhetorical style that attempts to assert personal control over reality itself. He repeatedly lies then smears truth-tellers to sustain his lies and distract his followers from hearing critical perspectives. Arendt argues that the normal world must never assume that the enormity or contradictory nature of totalitarian lies will be the system’s undoing and that it would be possible to force the leader into shameful humiliated retreat.“The totalitarian system, unfortunately, is foolproof against such normal consequences,” she says, “Its ingeniousness rests precisely on the elimination of that reality which either unmasks the liar or forces him to live up to his pretense.”

As the New York Times pointed out recently in its story “Trump’s Lies,” which catalogs every lie since inauguration, his non-stop falsehoods are an attempt “to create an atmosphere in which reality is irrelevant.” As Arendt notes, totalitarian propaganda is marked by its extreme contempt for facts while the chief qualification of a totalitarian leader is “infallibility.” Self-aggrandizing, Trump never admits he’s wrong or concedes a factual error; rather, he challenges the existence of any authoritative reality whether that’s professional journalists, his own intelligence officials, or the judiciary. In this way Trump inoculates himself: his followers become inflamed by mere counter-arguments offered by reporters, pundits, and liberals.

In his Twitter feed, Trump creates no overarching story line or internal consistency other than a hatred of the media and an aggrieved paranoia. Like a dictator, he tries to weaken journalism by delegitimizing it. His gush of opinions, assertions, and insults seek to repel accountability. The chastened, tiresomely respectful media pundits uncritically read his tweets out like headlines. While giving no press conferences, Trump dominates media attention, picking fights on Twitter, doubling down on long-discredited lies and sparking weekly firestorms. A dark lord of chaos, Trump spews out a fog of obscurity creating a permanent state of turmoil.

While pundits sometimes describe him as a child in a man-suit or a thin-skinned narcissist with a martyr complex, Arendt would perceive him as simply dangerous. The anger, accusations, insults, whining, and ever-shifting contradictory explanations are all indicative of what Arendt calls the totalitarian mood, the “perpetual-motion mania of totalitarian movements which can remain in power only so long as they keep moving and set everything around them in motion.” Just as the tweets are ephemeral so too are the opinions. Yesterday’s truth may not be today or tomorrow’s truth.Trump’s capriciousness reflects the “extraordinary adaptability and absence of continuity” that Arendt argues are the essence of the “specifically totalitarian virus.”

Just as the burnt woodsman in Twin Peaks mysteriously hypnotizes listeners when he speaks dark nonsense over the radio, Trump has infected a large segment of the public with a mass hallucination. This affective contagion is propagated by the Vichy Republicans, administration sycophants, and the Fox News/Breitbart/InfoWars echo chamber. His method of denial, deception, conspiracies, misdirection, tacit victim blaming, constant scapegoating, and outright fabrication continues to be acceptable to 35-40% of Americans. Anything that goes wrong gets blamed on Clinton, Obama, Mexicans, Muslims or the “fake news industrial complex.” His supporters don’t care that he’s lied to them about health care as long as they perceive that he shares their hatred for liberals, immigrants, and refugees. His supporters don’t believe in the reality of their own experience, but rather embrace the continuous, ever-changing reinforcement of their self-sabotaging emotions. According to Arendt, “Totalitarian propaganda thrives on an escape from reality into fiction and can only insult common sense when common sense has lost its validity.”

The mental landscape of the Trump base resembles the mob mentality that Arendt says is susceptible to totalitarian propaganda. “A mixture of gullibility and cynicism has been an outstanding characteristic of mob mentality,” says Arendt. “In an ever-changing, incomprehensible world, they would, at the same time, believe everything and nothing, think that everything was possible and that nothing was true.” They cannot be reached by experience or argument because they define themselves by cultural identification with Trumpism. In Arendt’s framing, they “form a society whose members act and react according to the rules of a fictitious world.” They are anti-anything-that-is-anti-Trump.

On the edges of Trump support are those that have not been completely shut off from the real world. These sympathizers — some of whom are innocuous fellow-citizens, friends and family — can hardly be called single-minded fanatics. It is through them that Trumpism can make its fantastic lies more generally acceptable, spreading its propaganda in milder forms until the atmosphere is gradually poisoned with totalitarian elements, which appear to be normal political reactions or opinions. Therefore, resistance to normalizing Trump must be total. Trump’s lies and hypocrisies must be tirelessly called out. Political activism at any level must be supported. The time is now, not the 2018 election. As the Trump White House descends into a Mad House, he might take advantage of a traumatic event, as Hitler used the Reichstag fire, as a pretext to install martial law or even create a shock event, such as bombing North Korea, as a major distraction. Writing The Origins of Totalitarianism in the shadow of totalitarian horror, Hannah Arendt warns future societies that freedom is fragile, that danger arises as soon as demagogues speak and others start following them, and that racism, xenophobia and the lies that arise from such beliefs can destroy a free state.

A filmmaker, journalist and author, Dan Dinello recently completed a chapter about totalitarianism and mad science for the upcoming book Westworld and Philosophy. Currently, he’s writing a book, for Auteur Publishing, about the dystopian science fiction movie Children of Men. He recently published Finding Fela: My Strange Journey to Meet the AfroBeat King – a memoir of his 1983 trip to Lagos, Nigeria, to film African musical legend Fela Kuti. His first book is Technophobia! Science Fiction Visions of Posthuman Technology. Dan has also contributed chapters to books about The Who, The Rolling Stones, Ridley Scott, Star Trek, and Avatar among others and made several contributions to Informed Comment.