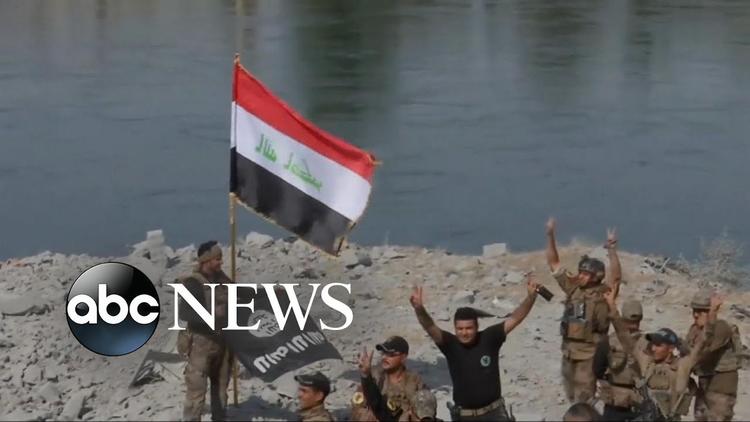 Al-Mada reports that 24 hours after Mosul was completely liberated from the hold of Daesh (ISIS, ISIL), Prime Minister Haydar al-Abadi visited it and walked around the city. Photos on his official Twitter site showed him in black military garb.

Al-Abadi convened a meeting with leaders of his military at Mosul. When he first arrived, he had announced that victory was assured and the remnants of Daesh were surrounded on a few square feet of territory. He said it was a matter of time before he would be announcing a magnificent triumph for the people of Iraq (i.e. that Daesh had been defeated). He praised the Iraqi army for their sacrifices.

At the end of his 8-hour tour, the prime minister said that the handful of remaining Daesh fighters had nowhere to flee, save to their deaths or to surrender. He announced “a great victory” in “liberated Mosul” after less than 9 months from his initiation of the effort to take Mosul back from Daesh.

Video of his visit showed Mosul residents celebrating the defeat of Daesh near the mosque of the prophet Jonah.

For its part, Daesh issued a communique accepting its defeat in Mosul and saying that it would make Talafar its new HQ. Talafar is a large Turkmen town that used to be split between Sunni and Shiite Turkmen but Daesh rule has led to the departure of the Shiites.

Some of the coverage of the fall of Daesh in Mosul was about the differing ways it was covered. Iraqi Shiites complained that many Sunni outlets concentrated on the loss of civilian life in the military campaign, and the controversial role of hard line Shiite militias. Even the Sunni-owned al-Zaman newspaper in Iraq concentrated on Sunni casualties and the destruction of the old city.

In the Sunni Arab world, sympathy with civilian victims of the Iraqi government campaign was apparent. Iraq Shiites also regretted the loss of civilian life, but typically blamed Daesh for it.