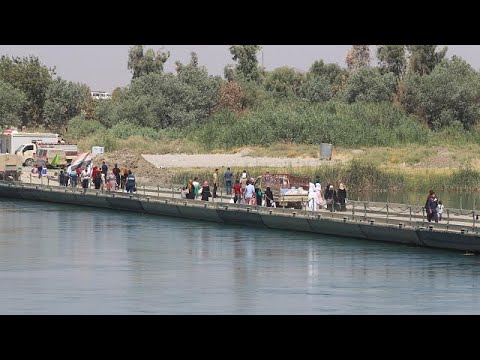 Locals in Mosul are divided on whether to rehabilitate, reconcile or punish the families of Islamic State members. Meanwhile rumour has it that secret detention camps are already being set up.

Basim told NIQASH that she thinks the families associated with the Islamic State group, the extremist organization that has controlled Mosul for around three years, should leave the city on their own. She was particularly keen after seeing what happened in the nearby town of Qayyarah, home to the IS treasury for more than two years, repeated in the larger city: There locals got together to push the Islamic State, or IS, families out of their town, without any need for intervention from local security forces.

Public anger about the situation has impacted the Mosul council. On June 10, they did issue decisions along these lines, stating that IS families should not be allowed to return. However, Basim says no action has yet been taken.

Punishing or isolating innocent people will just mean that we are creating schools for terror.

“The IS families are not worth more than the families of those people who were killed or dishonoured or displaced, or who lost their sources of living,” Basim argues. “If the IS families had any sense of responsibility, they would leave without being forced. They would do it to honour the martyrs, or out of their own shame.”

This opinion is just one of the many that are being debated by locals in Mosul today. The question of what to do with the families whose children joined the IS group, or who worked for the IS group, over the past three years, has yet to be resolved. Whatever solution is eventually agreed upon, it will affect hundreds of Mosul families.

But there are also plenty of other opinions.

The IS families who are not convicted of any wrong doing should be allowed to stay in Mosul but their movements should be restricted, suggests well-known Mosul novelist, Ghada Siddiq Rasool, who left for Baghdad in 2015. They should be carefully monitored, Rasoul says: They need psychological rehabilitation, their place of work should be recorded and observed, and they should be obliged to volunteer for community work. If the families are expelled, they will pose even more danger in the future, Rasoul says.

Under the IS group’s rule, local engineer Salam Saeed lost a brother, who died along with other members of his family when their house collapsed; the family had been hiding in the basement. Saeed also lost his own house and the business he started 20 years ago. So he believes the IS families must pay in some way – that would only be fair, Saeed says.

“Many of them [the IS members] escaped from Mosul through the humanitarian corridors that the military tried to open up during the fighting,” Saeed points out. “They just mixed with innocent civilians: We even saw some of them on the news. That’s not justice. They should suffer the way that we have suffered.”

A journalist working for the Al Mosuliya satellite TV channel, which broadcasts out of Istanbul, identified several members of the IS group infiltrating the displaced locals who were fleeing the fighting. The pictures of those IS members were published on Facebook and there was a lot of anger directed at the security forces, for allowing the perpetrators to escape. Iraqis also voiced fears on social media, that this meant that IS sleeper cells were already being assembled.

Saeed believes that the Iraqi military don’t have a proper overview of who was, and who was not, involved with the IS group. But locals such as himself do. “They should get help from the people who lived under IS for three years,” Saeed told NIQASH. “Because we saw everything with our own eyes.”

“The members of the IS group and their families have committed ugly crimes against us,” says Othman Qassim, a civil society activist, who was critical of those who were advocating a more tolerant approach. “They should be punished. We will only accept an eye for an eye.”

Qassim believes that the IS families should be transferred to special camps outside Mosul where they could be supervised by security forces and members of the judiciary as well as the Ministry of Education. The latter needs to be there because the IS families would have to complete courses in rehabilitation before they were allowed to return back to society. As for those locals that actually joined the IS group, they needed to be imprisoned and they should be stripped of their Iraqi nationality, he said.

Local writer Ali al-Jumrad has a different idea. He thinks that isolating all of the IS families in one place creates a whole new danger and that it will eventually result in “an angry and vengeful generation that believes only in the IS group’s ideology. Those children will grow up believing their fathers were martyrs,” al-Jumrad warns.

And what sin did that father commit, that he and his family now have to pay for the crimes of the son?

Al-Jumrad thinks that IS families from outside Mosul should be handed over to their original tribes for safekeeping. “Each tribe should protect the families and observe their behaviours at the same time,” the writer notes. “Tribal leaders should take responsibility for their members before the state. This could happen together with government-sponsored guidance – especially for the children – so that the influence the IS group had on them is diminished.”

As for the IS families originally from Mosul, once again al-Jumrad believes community is the answer. Community leaders in the different neighbourhoods should liaise with security forces to report any suspicious activity. But that needs to be done carefully, al-Jumrad adds. “It should not undermine the dignity of innocent people or create enemies in the society.”

Other locals are committed to a more moderate path when it comes to the families of IS, saying that they want the real criminals punished but that it would not be right to also punish the criminals’ families.

“Women, children and the elderly did not commit any crimes so there is no reason to punish them,” argues Mohammed al-Obaidi, a Mosul lawyer. “I am for punishing those who are convicted, according to the law, but I am against punishing their relatives, by expelling or arresting them. This is an unacceptable form of collective punishment.”

“Punishing or isolating innocent people will just mean that we are creating schools for terror, that only extremists, who want to destroy our society, will graduate from,” he continued. “They will always feel oppressed and they will want revenge upon those who they believe oppressed them. I am not ready to let my sons pay that price in the future, for my mistakes.”

Mosul professor, Ibrahim al-Allaf, former director of the Regional Studies Centre at the University of Mosul, told NIQASH that he knows of one man whose son joined the IS group. The son was eventually killed in fighting. But the father, who once held a senior role in a local government institution, is a peaceful man who loves his country. He had no idea where his son ended up until recently.

“And what sin did that father commit, that he and his family now have to pay for the crimes of the son?” al-Allaf argued. “Only those who actually committed the crimes should be punished.”

“We must work to bring unity back to Mosul,” al-Allaf argues. “We shouldn’t be dragged into this plan to expel families from Mosul because that will just perpetuate the cycles of hatred, and will eventually create organisations far bloodier than the IS group. It’s important to let the families stay and for the government to keep an eye on them.”

Civilians treading carefully on the way home because the IS group have left boobytraps.

Local journalist and columnist Marwan Yassin al-Dulaimi believes that it would be unwise to get too emotional about this question. He points out that some politicians are already using too much emotional rhetoric around the issue, in order to encourage division and consolidate their own powers. According to al-Dulaimi, the only real solution should be provided by the Iraqi legal system.

“We need to treat people as individuals rather than as herds, the way that the IS group treated them,” al-Dulaimi argues. “Let’s look at other examples. Look at the Kurds and how they reconciled with those who carried arms against them. And look at the experience in South Africa.”

For the time being, as Mosul strains to recover and the remaining IS fighters make their last, suicidal stand in certain parts of the city, nobody seems to have come up with any real conclusions as to what to do with the IS families.

Local rumour has it that no matter what decisions are being made, or that will be made in the future, the process of pushing the IS families out of Mosul has already begun. On condition of anonymity, a local police officer told NIQASH that the Iraqi army has already detained approximately 170 IS families in Bartala, a formerly-Christian-majority town east of Mosul. Nobody has been allowed to leave the camp.

Basim of the Mosul district council says that they have not moved any families to Bartala.

Other information also suggests that the Iraqi Ministry of Displacement and Migration has transferred around 100 families from Bartala to another camp, south of Mosul.

The authorities will not acknowledge that these are families with an IS connection. But locals say it is an open secret: Just as in other parts of Iraq, like Tikrit, there is already a special camp for IS families, who are kept separate from other displaced Iraqis, and who may not enter or leave the camp without permission. Their punishment has already begun.