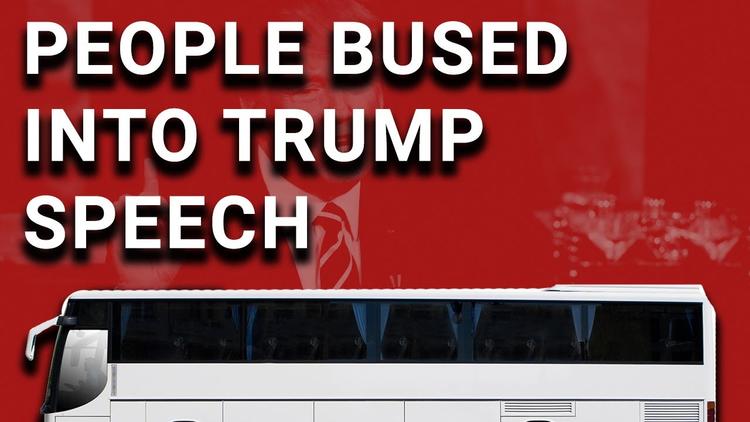 Donald Trump’s speech in Poland may have attempted to camouflage its Fascist undertones with some Nazi-bashing, but no one will be fooled. The speech was probably shaped by alt-Neo-Nazi Steve Bannon, White House strategist and enabler of the white supremacist roll of toilet paper known as Breitbart.

Like all Fascist speeches, it configured the Fatherland as weak and a laughingstock, threatened imminently with being wiped out. It is this paranoia and poor self-image that drives Fascist aggression. So Trump said,

“We have to remember that our defense is not just a commitment of money, it is a commitment of will. Because as the Polish experience reminds us, the defense of the West ultimately rests not only on means but also on the will of its people to prevail and be successful and get what you have to have. The fundamental question of our time is whether the West has the will to survive. Do we have the confidence in our values to defend them at any cost? Do we have enough respect for our citizens to protect our borders? Do we have the desire and the courage to preserve our civilization in the face of those who would subvert and destroy it?”

What this paragraph means by values is not the same as what Americans mean by values. We mean the Bill of Rights. Trump means the Religious Right. We mean a decent life for everyone, with health care a basic human right. Trump means plutocracy, an America of, by and for the multi-millionaires and billionaires. We mean tolerance and pluralism. Trump means racism against brown and black people. He again defended his Muslim ban, even though no one from any of the 6 Muslim-majority countries on his boycott list has launched a terrorist operation here in the twenty-first century. He is lauding Poles not because of their cultural achievements but because this are configured as the achievements of white people.

The irony that is papered over by the phrase “our civilization” is that the biggest enemies of Polish nationalism have been other Western states–Sweden, Germany and Russia (and no, not just National Socialism and Bolshevikism. Poland at one point was made to disappear by Germans and Russians who had never heard of either. And Polish Jews, a major component of the population, are no longer there because of virulent white nationalism.

As for Muslims, the lurking bad guys in Trump’s “Heil West” screed, they have been an important part of Polish history. Tatar Muslims served Poland militarily for centuries, and right into the twentieth century. In 1590 some 200,000 Lipka Tatars dwelled in the Polish–Lithuanian Commonwealth, serviced by at least 100 mosques. A unit of Tatar Muslims serving Jan Sobieski fought the Muslim Ottoman Empire at Vienna in the 1600s, helping preserve Europe from Ottoman rule. One of the direst threats to Polish Muslims was the Nazis, who attacked their mosque in the 1940s. There is still a small Polish Muslim population.

“Our civilization” has all along included Muslims and Jews and Africans and Arabs.

Trump papers over these ambiguities in favor of large-scale racial stereotyping.

Trump’s so-called health care bill will kill 22,000 people, far more than terrorists of any kind ever have.

Above all, Trump upholds the values of fear, timidity and paranoia. A small radical fringe in the Muslim world cannot menace America’s civilization. But a far right white nationalist president with serious mental issues can.