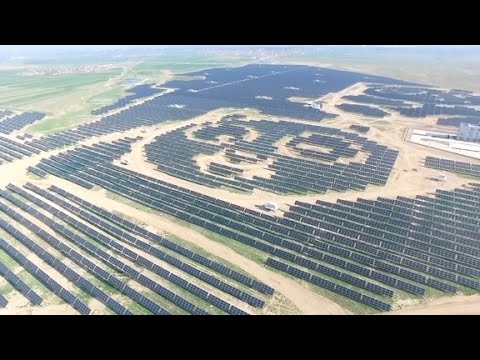 Italy is attractive as a market for solar energy, in part because it is a sunny country and solar is a much cheaper alternative to oil, gas and coal. Italy has high electricity rates, impelling a rush to renewables. Solar energy production was up 22% in 2016, and installations continue.

An Italian firm also won the right to install solar panels in Bushehr, Iran. Iran generates some electricity with petroleum, which is a loss since it could be sold on the world market. It thus is interested in renewables. Each kilowatt hour brought to Iran by solar equates with more money that can be made by selling the oil abroad instead of wasting it domestically.

* Off Scotland, the world’s largest *floating* wind farm has been set up, supplying electricity to 20,000 homes. Offshore wind farms are usually sited on islands or use turbines anchored to a shallow underground shelf. These enormous turbines, however, just float. They are an experiment that if successful could be a game changer.

* France had been a laggard in renewables, depending heavily on nuclear reactors (though to be fair, they are also relatively low-carbon, though the problem of radioactive waste disposal hasn’t been solved). All that is changing with the new Macron government, which wants to have renewables supply a third of French electricity in only 13 years, by 2030. Hence, France just let a bid for 500 megawatts in solar installations.

* Telengana State in south India has plans to have solar panels power all 3,000 mosques and the many thousands of Hindu temples in the state. I always say, if you are a religious institution and you don’t have solar panels on your place of worship, you are getting your electricity from Satan.

* The internet has gone gaga about China’s “ultra-adorable panda-shaped” 100 megawatt solar energy farm. Chinese like them too. They are planning to build 100 of them! China installed 34 gigawatts of new solar in 2016–about half of all the new solar power capacity installed in the whole world and twice that of the US last year. China added another 8 gigs in just the first quarter of 2017. China hopes to get a third of its energy from solar alone by 2050 and to phase out coal, currently its major source of electricity production, as quickly as possible.