Trump’s New York Times interview can only be understood, to the extent that it can be understood, as the ramblings of someone suffering from delusions of grandeur. It is rambling, full of non sequiturs, and of bizarre allegations.

Trump said that he regretted appointing Jeff Sessions attorney general, since Sessions went on to recuse himself from the investigation of Russia’s meddling in the 2016 election (what with Sessions repeatedly meeting with the Russians and all). Sessions stepping aside that way led the assistant AG to appoint a special prosecutor to investigate Trump’s Russia ties. Trump warned the prosecutor, Robert Muller, not to look into his business affairs. But gee if you were investigating Trump’s Russia connection, his business ties would be high on a prosecutor’s list. Don Jr., who has a big mouth, let it be known on the golf course once that the Trumps routinely borrowed large sums from Russian banks.

Trump says that he had told French President Emmanuel Macron that Napoleon Bonaparte had been a failure, but that Macron demurred, saying he designed modern Paris. Actually that was Baron Georges-Eugène Haussmann who designed modern Paris, at the order of Emperor Napoleon III, and one suspects that Macron must have gotten mixed up about his Napoleons (assuming Trump reported Macron correctly, which cannot be assumed).

Then Trump observed that Napoleon had not ended up so badly (he was exiled to a very remote island after losing at Waterloo to the British).

And his one problem is he didn’t go to Russia that night because he had extracurricular activities, and they froze to death. How many times has Russia been saved by the weather [garbled]?”

Napoleon’s Jeff Sessions was Charles Talleyrand. Talleyrand thought it was wiser to consolidate French conquests and to make peace with, e.g., Austria than to go on dangerously extending the imperial army. He was against Napoleon’s plan to invade Russia and had to step down in 1807. He later conspired against Napoleon, and played a role in the peace settlement when Napoleon was overthrown, leading to his exile.

Actually I wrote a book about one of Bonaparte’s invasions (of Egypt, not of Russia). 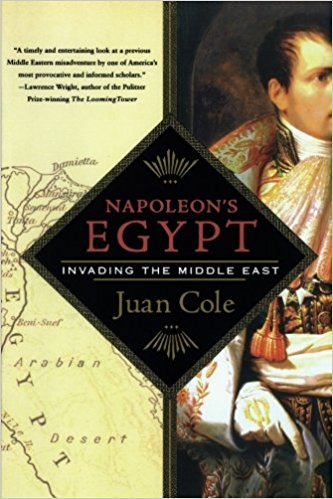 I can attest that Bonaparte had an affair(probably what Trump meant by extracurricular activities) while in Cairo, with the wife of a junior officer, something that embarrassed his stepson, Eugene de Beauharnais, who was forced to ride behind the adulterous carriage. Eugene was being overly sensitive, since his mother Josephine usually had at least a couple of affairs going on, herself.

Perhaps Trump is projecting on Napoleon his own extracurricular activities in Moscow, though I couldn’t tell you if Napoleon liked golden showers. I doubt it, since the biographers say he was sensitive to smells and was attracted to women who smelled good to him.

However, I can assure Mr. Trump that Bonaparte would never have let some mere p-grabbing interfere with his duties as a leader on the battlefield and that he did go to Moscow and wasn’t delayed in Paris by a dalliance. Unlike some people, he wouldn’t have had time to go off to a hotel with some ladies of the night while he was supposed to be staging a major operation.

Trump is right that Napoleon’s army was in part defeated by the Moscow winter. Note though that winters were colder and harsher then since that was before human beings spewed so much carbon dioxide into the atmosphere that they changed the climate.

In fact this is Charles Joseph Minard’s famous attempt to visualize the Russia campaign. The broad brown lines are the troops that wen to Russia and the thin black ones are those that came back. Temperature is plotted at the bottom.

So to sum up, what can Trump learn from Napoleon, really?

It is dangerous to get bogged down in Moscow.

It is especially dangerous to get bogged down in Moscow with escorts.

If you dismiss a powerful official, it can come back to bite you in the ass.