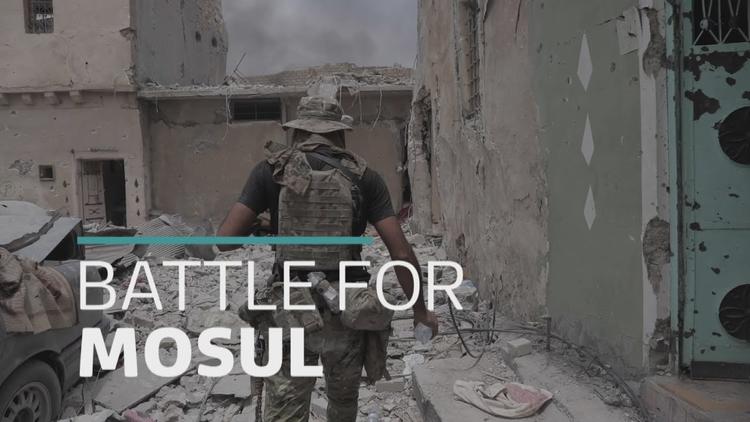 Having been driven out of Mosul, the extremist Islamic State group is doing what Al Qaeda did before them: setting up new bases in the rugged northern Hamrin mountain area.

The extremist Islamic State group has lost its capital in Iraq, after they have been pushed out of almost all of the northern city of Mosul. However stories are being told right around Iraq of how the extremists are just going back to their old tactics of hit-and-run, guerrilla style fighting against pro-government forces.

The semi-autonomous northern region of Iraqi Kurdistan is no exception. According to intelligence from the Iraqi Kurdish military, there have been intensive movements of IS fighters observed in the Hamrin mountains over the past few weeks. It is believed that many of the organisation’s leaders from Mosul have retreated into this rugged backcountry.

The IS fighters often roam nearby at night but then fade away, back into the mountains, in the morning. It is a psychological war.

“After the campaign against them in Mosul, the IS group is returning to the Hamrin area and into the Hawija area, either as individuals or as small groups,” Rasoul Karkui, commander of the Iraqi Kurdish military in Kirkuk also known as Wasta Rasoul, told NIQASH. “It is clear that they intend to strengthen their presence in this area. A while ago they announced the creation of their “Mountain State”. But they don’t plan to launch a war against the Iraqi army or us. They only want to attack us and use guerrilla tactics.”

The Hamrin mountains extend through the provinces of Diyala, Kirkuk and Salahaddin, right up to the borders with Iran and even onto some parts of the Syrian border. After the IS group took control of Mosul in mid-2014, much of the Hamrin basin was also under their rule. However counter-attacks by the Iraqi army and the Iraqi Kurdish military saw them return to pro-government hands and there had been relative stability there up until recently.

The Hamrin basin contains the Hamrin lake, the south and east sides of which are under the control of the Iraqi army and the Shiite Muslim militias. The north and east are under Iraqi Kurdish control. Military intelligence do expect the IS group to use the lake for travel.

The Hamrin mountains have a long history of insurgent activity. The rugged terrain and the connection between various borders – in particular, Syria’s – facilitate the transfer of fighters and weapons, as well as making it hard for local security forces to keep track.

After the 2003 US-led invasion of Iraq, which saw the government led by Saddam Hussein toppled, most of the anti-US groups that arose afterwards found a home in the Hamrin mountains. That included Al Qaeda, Ansar al-Sunna and the Naqshbandi Army, all of whom could be considered forerunners of a sort to, or constituents of, the IS group.

Those groups all used to come out of the mountains, attack and then retreat to the hills.

“The IS group is now resorting to guerrilla warfare after they lost control of the larger cities,” confirms Abdulla Bor, leader of the Iraqi Kurdish forces in the Tuz Khurmatu area, which have been attacked by the IS group several times over the past few weeks.

Trenches have been dug to try and prevent the attacks and Bor says the IS fighters often roam near the hills of earth at night but then fade away, back into the mountains, in the morning. It is a psychological war, Bor adds.

The fact that the extremists are hiding out in the Hamrin mountains is not just a problem for the semi-autonomous region of Iraqi Kurdistan. It will also cause problems for the rest of Iraq.

In early June, Lahur Jangi Talabani, the head of one of Iraqi Kurdistan’s intelligence services, went to Baghdad to speak to senior officials there about it. A press release issued after the meeting said the presence of the IS group in the Hamrin mountains and in the province of Diyala were discussed. AT the end of last week, Talabani told news agency Reuters that he believes the IS group will make the Hamrin mountains a major base and that the Iraqi Kurdish military are expecting hard times in this area.

Another senior Iraqi Kurdish commander, Rebin Taha, who is in charge of forces near Jalawla in Diyala province has a new gripe. He says the IS fighters are coming out of the areas in Hamrin where the Iraqi army and Shiite Muslim militias are supposed to be in charge, attacking his forces, then returning back there.

“The most important thing for the Iraqi Kurdish is that the IS fighters cannot establish any bases in areas under our control,” Taha argues that the Kurdish should look after themselves. “We need to completely fortify our region.”

ITV News: “Final days of frontline battle against IS in Mosul”