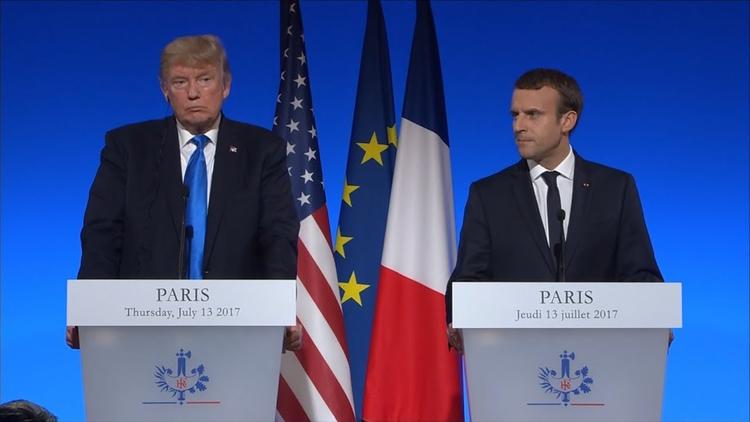 French President Emmanuel Macron and his American counterpart Donald J. Trump consulted on a number of bilateral issues on Wednesday, including cooperation in Syria and Iraq.

Trump says he was in France to attend Bastille Day and commemorate the centenary of the entry of the US into WW I. It seems fairly obvious, though, that while his Paris trip was not planned to get out of town during the controversy of Don Trump Jr.’s meeting with a Russian lawyer represented as having dirt on Hillary Clinton, at the least it came as a welcome escape from the Washington feeding frenzy.

Macron said that they had agreed to work toward another cease fire in Syria.

Trump maintained that the agreement reached with the Russian Federation and the Syrian government on deconfliction zones in Syria had “saved a lot of lives.”

Likewise, Macron made it clear that he no longer insists on the resignation of Syrian president Bashar al-Assad as a precondition for participating in peace talks regarding Syria. His position is that terrorism is a greater threat than is al-Assad, a stance similar to that of Trump himself.

Macron also underlined the military cooperation of France and the US in operations against ISIL in eastern Syria. Paris was hit by ISIL in November, 2015, and France is determined to destroy the last vestiges of the terrorist ‘caliphate.’ Macron, a national security hawk, wants to enshrine state of emergency measures like warrantless house searches and banning of demonstrations in law. There were things he could agree on with Trump.

Macron said he respected the wish of the American people as it manifested itself in the election of Trump, to pull out of the Paris climate

Trump for his part seemed to waver, some seven weeks after his decision to pull out, saying that some piece of news on all that could be forthcoming.

Philippe Bernard writes in Le Monde about the irony that Trump’s July trip to Europe should have been to France rather than to the UK. Prime Minister Theresa May is probably closer to Trump ideologically, and she needs him more. With Britain pulling out of the European Union it needs a free trade treaty with the US if it is going to avoid economic isolation, he says. But the threat of mass street demonstrations, the negative comments of prominent parliamentarians and Trump’s attacks on London mayor Sadiq Khan all come together to convince Trump to postpone any visit until 2018.

Macron appears to have been able to tempt Trump over to Paris in part by the prospect of Bastille Day military parades. Trump likes spectacle of that sort.

The meeting in Paris was overshadowed by the Donald J. Trump, Jr. email scandal, given the smell of collusion that was exuded by the emails he released.

The blue lobster on which they dined at the end of the day in the Jules Verne restaurant atop the Eiffel Tower probably exhibited more substance than did the consultations with a distracted and flighty Trump, who told Madame Macron she looked in great shape (for an older woman?)

If Trump and Macron did decide anything about Syria, the problem is that Trump is unlikely to remember it or stand by it even into next week.