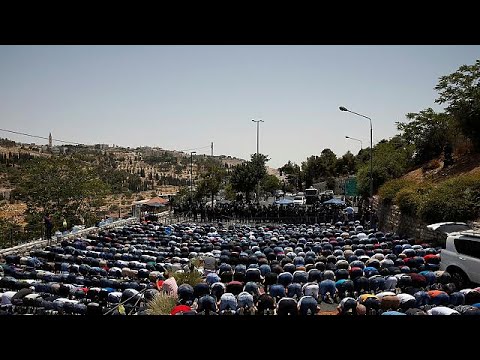 JERUSALEM (Ma’an) – Following deadly clashes that erupted across the occupied West Bank, including East Jerusalem, and besieged Gaza Strip on Friday in protest of continued Israeli-imposed restrictions on Al-Aqsa Mosque, the Islamic Trust, or Waqf — in charge of running the holy site — has confirmed that all Israeli restrictions have been lifted and gates have been opened for Palestinians of all ages from occupied East Jerusalem, Israel, or those with Israeli permits from the occupied West Bank to perform Asr (afternoon) prayers at Al-Aqsa.

Head of public relations at the Waqf Firas al-Dibs told Ma’an that Israeli forces had opened all gates to Al-Aqsa Mosque and lifted restrictions banning Palestinian men under the age of 50 from entering the holy compound, which was enforced by Israeli authorities since Friday morning.

During dhuhr (noon) prayers, when protests erupted across the occupied Palestinian territory, scores of Palestinians were prevented from praying at Al-Aqsa amid two weeks of unrest over Israeli policies at the holy site.

Israeli police spokeswoman Luba al-Samri said that the security measures at Al-Aqsa were only meant to apply to dhuhr prayers on Friday, adding that after the noon prayer Palestinians of all ages would be permitted to enter Al-Aqsa Mosque.

Meanwhile, Palestinian lawyer Muhammad Mahmoud said that Israeli authorities had released 95 Palestinians during dawn hours on Friday who were detained during clashes at Al-Aqsa on Thursday, while 28 detainees were released on Friday morning.

The Palestinian Prisoner’s Society had reported earlier on Friday that 21 Palestinians were banned from Al-Aqsa for 15 days.

What was hailed as a rare victory for Palestinians, after thousands participated in a nearly two-week civil disobedience campaign and successfully demanded the removal of Israeli security measures at the holy site, was quickly transformed into violent clashes on Thursday when Israeli forces raided Al-Aqsa Mosque as thousands of Palestinians had entered the site for the first time since July 14.

Palestinians continued mass demonstrations across the occupied Palestinian territory in protest of the new restrictions on Al-Aqsa. The protests turned deadly after a 16-year-old Palestinian was shot to death by Israeli forces in Gaza, while another Palestinian in the Jerusalem-area town of al-Ram was reported in critical condition after being shot by Israeli-fired live ammunition.

According to Ma’an documentation, six Palestinians were killed by Israelis, one of whom was killed by an Israeli settler, since mass protests were organized among Palestinians over the past week to protest Israel’s policies at Al-Aqsa.

Palestinians have celebrated their successful protests around Al-Aqsa in the context of routine Israeli violations of Palestinian life and properties in East Jerusalem, which makes such victories seldom amid Israel’s continued occupation of the territory.

Meanwhile, others have pointed out that Israel continues to restrict millions of Palestinians from accessing the holy site through its annexation of East Jerusalem — a move never recognized by the international community — and its half-century occupation of the West Bank and 10-year siege on Gaza, which have forced Palestinians outside of East Jerusalem and Israel to obtain Israeli permits in order to pray at Al-Aqsa.
Many Palestinians in the West Bank and Gaza Strip who are unable to obtain Israeli permits have never been able to visit Al-Aqsa Mosque.