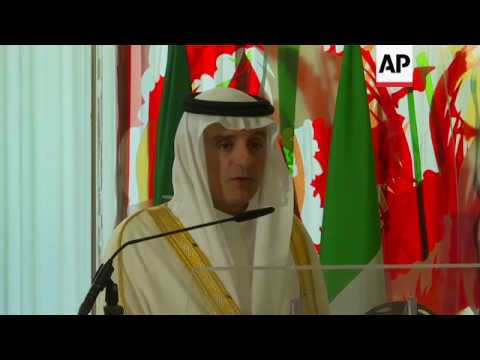 Iraqi Shiite cleric Muqtada al-Sadr on Sunday paid a visit to Saudi Arabia’s Red Sea port, Jidda, at the invitation of the Saudi royal family. He was hosted by Crown Prince Muhmmad bin Salman, who is acting head of state while his father is on vacation.

Al-Sadr has not been in Saudi Arabia since 2006. Inasmuch as he is a hard line Shiite and heads his own hard line militia, the “Peace Brigades,” he might not have come first to mind if you were thinking about Iraqis that the militantly fundamentalist Wahhabi monarchy in Saudi Arabia might invite to the kingdom.

In fact, despite his Shiite fundamentalism, al-Sadr is politically even-handed in ways that might appeal to Riyadh. Although Western analysts have repeatedly pegged him wrongly as a cat’s paw of Iran, in fact al-Sadr is an Iraqi nativist whose movement resents the influence of Iran on Iraqi Shiism.

Al-Sadr has all right relations with Iran and did flee there for studies in 2007 when Gen. David Petraeus tried to have him arrested as a sectarian religious leader responsible for deaths of Sunnis. But he has tended to maintain his independence from Tehran’s ayatollahs.

Al-Sadr opposes the tendency to see the Shiite militias in Iraq as a stand alone force, sort of a National Guard (a line pushed by Iran) and rather wants them absorbed into the regular army.

Last March, al-Sadr called for formal peace talks between Saudi Arabia and Iran, since those two countries are on all but a war footing. Al-Sadr argues that some face to face summits among leaders of the two countries could tamp down sectarian tensions and lead to a new era of good feeling in the Middle East.

Saudi Arabia has lost its struggle with Iran over the past 15 years. Iraq went from a Saudi asset under Saddam Hussein to an Iranian asset after the Shiites won the parliamentary elections in 2005 and after.

Saudi Arabia used to be influential in Lebanon, with the Sunni al-Hariri family gaining the prime ministership. Rafiq al-Hariri had worked in and made his fortune in Saudi Arabia and was close to the royal family. He was assassinated in 2005, after which most Sunnis and Christians allied to launch a popular movement aimed at forcing Bashar al-Assad of Syria to withdraw his occupation troops from the country, which succeeded. Al-Assad is allied with Iran and with Lebanon’s Shiite militia, Hizbullah, so this withdrawal weakened Iran. But the outbreak of the Syrian civil war made Lebanon’s Christians choose between an al-Assad-Shiite-Iran axis and a Sunni-Saudi one. Once the rebels in Syria went toward Sunni fundamentalism, they scared the Christian horses. Many Lebanese Christians declared themselves neutral or allied with Lebanese Shiites against the rise of Sunni Salafism and other forms of fundametnalism, which were Backed by Saudi Arabia. Hence, Hizbullah is now in the Lebanese cabinet, something of which Donald Trump is unaware, and the current Lebanese government tilts heavily toward al-Assad and Iran and away from Saudi Arabia.

The Baath regime in Syria had been allied with Iran since the 1980s, not on religious but on Realpolitik grounds. For a while after the outbreak of attempted revolution in 2011, it looked as though Syria might come to be ruled by the Sunni majority and Saudi Arabia hoped to pick it up as a client. In the end, Iran and Russia intervened successfully to prop up the Baathist regime of Bashar al-Assad and to defeat Saudi proxies such as the Army of Islam (Jaysh al-Islam) and other hard line Salafi guerrilla groups.

Then in Yemen the nationalist regime of Ali Abdullah Saleh was overthrown 2011-2012 in favor of a more pluralist set of forces. But in 2014 the Zaydi Shiite Houthi militia took over the capital of Sanaa. The Houthis are Yemeni nativists who deeply resent Saudi hegemony over Yemen. Saudi Arabia accuses them of being clients of Iran but in fact that relationship is minor. Still, the southwestern Saudi border is much less secure than it had been, and the Houthis have managed to hold on in the capital and its hinterland.

When Saudi Arabia and its allies tried to pressure Qatar into falling into line behind Riyadh’s policies, of suppressing the Muslim Brotherhood and rolling back street politics and freedom of the press in favor of military dictatorships in the region, Qatar resisted. Iran came to Doha’s defense. In essence the Saudis pushed Qatar from having correct but sometimes tense relations with Iran to needing Tehran as a friend.

So Saudi Arabia is 0 for 5 in regional geopolitics and Iran is sitting relatively pretty.

The Yemen War, the brainchild of Crown Prince Muhammad bin Salman, is said to be hemorrhaging money from Saudi Arabia’s coffers at a time of low oil prices and retrenchment.

One possibility is that Riyadh is looking for a back channel to Iran, in hopes of coming to a negotiated settlement of some of these high-profile conflicts. Most regional politicians and parties with good access to the ayatollahs in Tehran are on the outs with Saudi Arabia, which would not trust them. Al-Sadr in that regard is perfect. An Arab nationalist, a pan-Islamist in politics who has given aid to Sunnis and an anti-interventionist in Syria, many of his positions would be appealing to the Saudis despite his hard line Shiite fundamentalism. If they need to send a message to Tehran, he would be a plausible envoy.

Another less optimistic interpretation is that the Saudis are looking for chinks in Iran’s armor and exploring whether al-Sadr might like Saudi support in his quest to make Iraq less dependent on Iran.

One thing is for sure. The Saudis did not invite a major Iraqi Shiite cleric to Jidda just to inquire after his health.