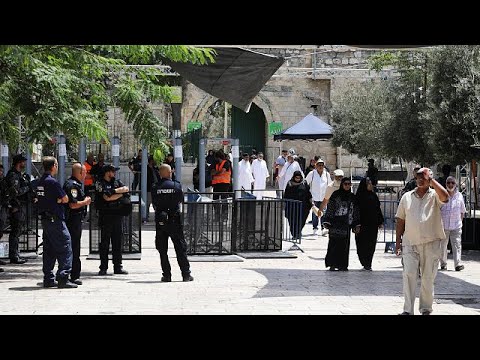 On Sunday in Amman, the capital of Jordan, two workers arrived at the Israeli Embassy in the tony Rabiyeh neighborhood. One of them attacked the Israeli security guard with a screwdriver, lightly injuring him. The guard appears to have shot his assailant. Somehow the building’s landlord also ended up dead.

The attack at the Israeli Embassy came after a week of building tension in the region over the Aqsa Mosque on the temple mount.

Then the Israeli government announced that they would put metal detectors at the Aqsa Mosque.

That move, seen as a form of desecration of the holy site, provoked big demonstrations and late last week several Palestinians at rallies were shot dead by Israeli police. 8 people are dead over the weekend.

This sort of thing can weaken and disrupt the Jordanian government, which has a peace treaty with Israel. The 2009 Israeli attack on Gaza provoked huge demonstrations in Tunisia, establishing networks of protesters and expertise in mobilizing that were deployed in 2010-2011 to make the Tunisian Revolution.

Cooler heads are urging Prime Minister Binyamin Netanyahu to reconsider the metal detectors, which are causing more deaths than they might prevent.

Israel captured East Jerusalem and the Palestinian West Bank in 1967 and has pursued an aggressive colonization policy that has aimed at emptying East Jerusalem of Palestinians and surrounding the remaining families and cutting them off from the West Bank. The Palestinians are under martial law and ruled by the Israeli military in one of the world’s last truly colonial enclaves, deprived of most basic human rights (including to their own property). Ultimately, Israeli officials hope to ethnically cleanse the 2.4 million Palestinians from the West Bank and replace them with Israeli colonizers. These actions are illegal in international law. Moreover, if you try to steal everything over decades from 2.5 million people while subjecting them to foreign military occupation, there is likely to be trouble over it.

The temple mount is where Israeli Jews allege the old Temple of Solomon was, but it was torn down by the Chaldeans or Neo-Babylonians in 587 BCE. Then the Iranian Achaemenid Empire of Cyrus the Great and his successors let the Jews rebuild the temple. It lasted until the revolt of 66-70 CE, a little over thirty years after Jesus’ crucifixion, against the Roman Empire. The Romans tore down the second temple in 70 CE and expelled Jews from Jerusalem, renaming it Aelia Capitolina and constructing huge temples all over the place to Jupiter and Venus, making it a pagan city until the 300s. After the Roman Empire turned Christian under Constantine and his successors, they continued the formal ban on Jews in Jerusalem and made it a Christian city. Briefly, in 614-629, it was ruled by Sasanian Iran. Then the Roman Empire recovered it under Heraclius for a few years until it fell to the Muslim Arabs in 637.

Muslims ruled Jerusalem for most of the succeeding 1,281 years, with a hiatus during the Crusades. For Jews and Christians, it is natural to associate Jerusalem with Jews, and sure it has been intimately intertwined with Jewish spirituality. But the city existed for millennia before there were any Jews, having been a Canaanite settlement dedicated to the god Shalem. And it wasn’t actually ruled by Jews for all that long (Egypt, Iran, Rome and the Muslims also ruled it).

Jerusalem is the third holiest city in Islam and Muslims believe that the Prophet Muhammad spiritually journeyed there and ascended into heaven from the temple mount. Muslims have for centuries been stopping off in Jerusalem for a pilgrimage (ziyarah) before or after the Hajj or major pilgrimage.

The Aqsa Mosque is extremely important for Muslim spirituality.

After Israel captured East Jerusalem in 1967, Jewish millenarians began dreaming of tearing down the Aqsa Mosque and replacing it with the Third Temple.

Your own personal security is wrought up with this issue. Ambassador Peter Galbraith once observed Iraq in 2006 that the most successful terrorist strike in modern times killed no one. Al-Qaeda in Mesopotamia blew up the Golden Dome or Askariya Shrine in Samarra, which is holy to Shiite Muslims. This insult to religious feelings during holy days set off a Sunni-Shiite civil war that by summer of 2006 was killing 3000 people a month and which led the Shiites to ethnically cleanse the capital of Baghdad of Sunni Muslims. That civil war in turn laid some of the foundation for the embrace in 2014 by Iraq’s Sunni Arabs of ISIL, and their virtual secession from the country.

Religious shrines are not ordinary spaces. Most Western journalists, academics and military officers are secular-minded and cannot imagine the passions provoked by attacks on holy sites.

And the Aqsa Mosque in Jerusalem is the Big Kahuna of sensitive world religious sites.

This is a place that could set off decades of violence and inflame the passions of 1.6 billion Muslims. In fact, the Israeli military occupation of East Jerusalem and the Aqsa Mosque was cited by Usama Bin Laden as one of the three reasons for which al-Qaeda destroyed the World Trade Center, which killed nearly 3000 Americans.