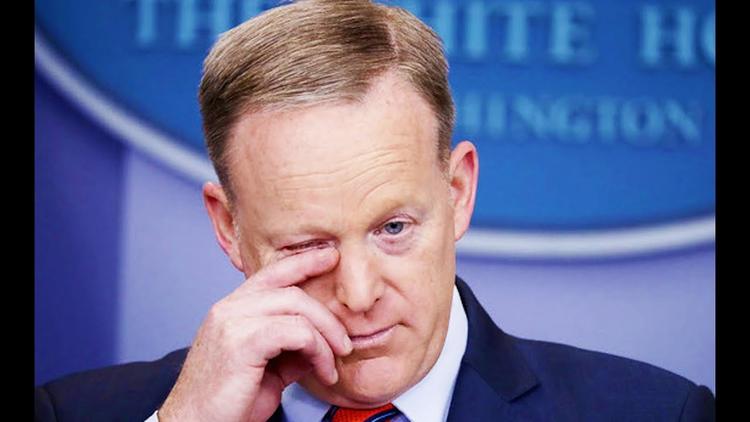 The U.S. President’s legal team is also undergoing a shake-up.

Sean Spicer, the controversial White House press secretary, has resigned and will be replaced by his former deputy, Sarah Huckabee Sanders.

Spicer is said to have quit after denouncing chaos in the West Wing and telling the U.S. President Donald Trump that he disagreed with the appointment of the New York financier Anthony Scaramucci as communications director.

Trump had reportedly asked Spicer to stay on as press secretary.

But Spicer said Scaramucci’s appointment was a major mistake and quit, according to The New York Times.

In one of his first official acts, Scaramucci, who founded the global investment firm SkyBridge Capital and is a Fox News contributor, joined Sanders, at a news conference in the White House to announce her appointment.

Spicer had been heavily criticized for his gaffes over the last six months.

After Trump’s inauguration in January, Spicer inspired the hashtag #SpicerFacts after reiterating his claim that the ceremony had the biggest audience in history, despite evidence from photos, crowd experts, TV ratings and the Washington Metro network.

In the face of mounting evidence to the contrary, Spicer declared: “Sometimes we can disagree with the facts.”

Spicer also said Trump’s executive order blocking entry of refugees and travellers from seven predominantly Muslim countries was not a “travel ban”, even though the president had used the word “ban”.

Called out on this, Spicer said: “He’s using the words that the media is using”.

In April, Spicer was forced to apologize twice for his comparison of the Syrian President Bashar al-Assad with Adolf Hitler.

Spicer had told reporters that Hitler “didn’t even sink … to using chemical weapons,” a comment which ignored the mass killing of Jews in Nazi gas chambers in the Holocaust.

The veteran Washington staffer, was also parodied by the U.S: actress Melissa McCarthy on the “Saturday Night Live” TV comedy show for his combative encounters with reporters.

“I am grateful for Sean’s work on behalf of my administration and the American people,” Trump said in a statement. “I wish him continued success as he moves on to pursue new opportunities. Just look at his great television ratings.”

Spicer will stay on the job until the end of August.

The U.S. President’s legal team is also undergoing a shake-up.

The Financial Times reports that his longtime personal attorney, Marc Kasowitz, is being sidelined and replaced with John Dowd, a veteran Washington lawyer with experience in political scandals, moved into the leading role.

The changes come as Trump faces the developing investigation into allegations of Russian interference in November’s presidential election led by Robert Mueller.

His son Donald Trump Jr and son-in-law Jared Kushner, now a White House adviser, are due to testify before a parallel congressional investigation next week.

And there’s said to be growing unease within the Republican party over the adminstration’s inability to pass legislation or deal with pressing matters of state.