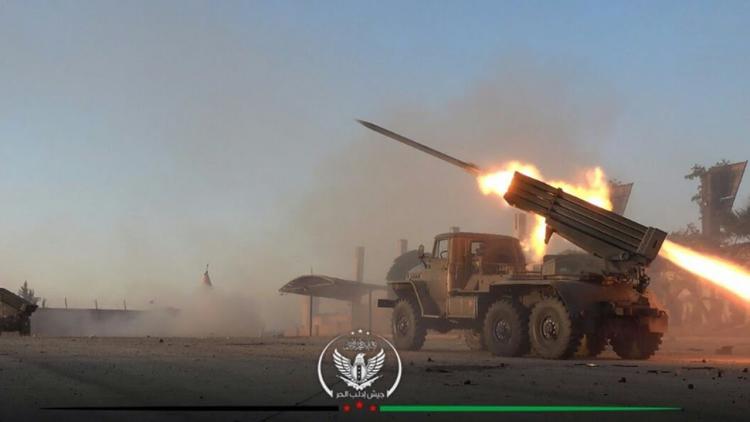 Trump trashed the Washington Post on Monday, calling it the Amazon Washington Post and implicitly complaining about a July 19 article on his halt to funding Syrian rebels. Trump tweeted:

The Amazon Washington Post fabricated the facts on my ending massive, dangerous, and wasteful payments to Syrian rebels fighting Assad…..

Trump was probably not actually complaining about reporting on the defunct program but on its motive. WaPo alleged a quid pro quo with Russia, which is what set Trump off.

I didn’t approve of that CIA program to fund some 40 ‘vetted’ groups. Despite being allegedly ‘vetted’ for lack of ties to Muslim extremist groups, the US-backed rebels sometimes showed up with battlefield alliances with the Syria al-Qaeda affiliate, now called the Syrian Conquest Front but then the Nusra Front.

Call me old fashioned, but if a group is loyal to al-Qaeda leader Ayman al-Zawahiri, who killed nearly 3000 Americans on 9/11, then I don’t want my taxpayer dollars going to someone willing to fight alongside it. We saw that movie in Afghanistan in the 1980s and it ended with the September 11 attacks. Apparently the kind of people who make these decisions have sociopathic tendencies and often not very good sense.

Moreover, reportedly the pass-through for this program was Saudi Arabia, which should be kept away from Syria. The Saudis back hard line Salafis ultra-Sunnis. There aren’t very many of them in Syria and all the Alawis, Christians, secular Sunnis, Druze, Shiites, and Kurds are terrified of them. What was the Obama administration thinking, making the Saudis its agent for this program?

But Trump’s account is also flawed. First of all, the program was not massive. One report characterized it as 13 bullets a month per rebel fighter.

I would agree that by the time the program was implemented, in 2013, it had become dangerous. It wasn’t enough funding actually to allow the rebels to win, but it kept them on the battlefield. It just prolonged the civil war with no prospect of victory.

But WaPo had reported that Trump ending the program “reflects Trump’s interest in finding ways to work with Russia.”

It also quoted an unnamed official who said that Putin had just won the Syria war.

News seems to travel slowly in Washington. Putin had decisively won the Syrian civil war some time ago. At that point where the rebels were chased out of Homs and out of Latakia province they no longer had a pathway to cause Damascus to fall by cutting off supplies from the Mediterranean port of Latakia.

Right now there are only a few questions:

1. When will ISIL be defeated in Syria’s East?

2. When will the al-Qaeda affiliate be defeated in Idlib (it just took over Idlib city)?

3. When will the rebel remnant be defeated south of Damascus?

4. Will the leftist Kurds of the YPG be reintegrated into Syria?

Aside from those issues, it is all over for the 80% of Syrians living under government control.

The US is no longer involved in the rebel resistance in Homs and Idlib. It is very much still involved in the anti-ISIL fight in the east, where there are about 1,000 special forces operating. This anti-ISIL operation will continue.