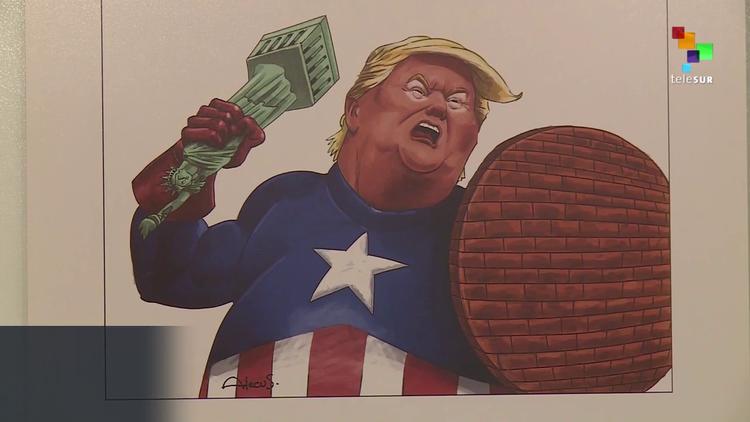 More than 1,600 artworks were submitted to the “International Trumpism Cartoon and Caricature Contest.”

U.S. President Donald Trump and his policies are the themes of an international cartoon contest organized by the Islamic Republic of Iran, with more than 1,600 artworks submitted to the “International Trumpism Cartoon and Caricature Contest,” PressTV reported.

Over 550 people from 75 countries sent cartoons to the contest, which began last Monday and will run for a week. The competition’s logo courted controversey as the “T” in Trumpism was positioned diagonally, apparently to depict a swastika.

Hadi Asadi, an Iranian cartoonist, took home first prize, receiving a US$1,500 award for his drawing of Trump donned in a jacket made of dollar bills, and a tie depicting the U.S. flag while he drooled over a stack of books that represent culture. His hair, flaming upward, partially blocks out a world map in the background.

“I wanted to emphasize the U.S. president’s money-mindedness and warmonger nature,” said Asadi.

Ali-Asghar Jafari, the contest’s director, said that the United States “is moving against Muslim countries, especially Iran.” He also emphasized that “it was difficult to prove U.S. brutality in the past, but Trump’s presence has made it easy.”

Another event organizer, Masud Shojaei-Tabatabai, noted that “the -ism in Trumpsim is a direct reference to racism and Nazism,” and that the exhibition is intended to highlight Trump’s misled policies within a satirical scope.

“This contest considers Trump as a symbol of U.S. capitalism and hegemony that many intellectuals compare with Nazism,” he said.

The Independent reported that other themes depicted in the contest included violence against women and wall building.