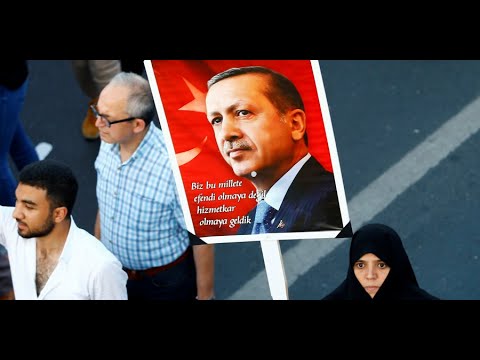 President Tayyip Erdogan of Turkey commemorated on Saturday the anniversary of the failed coup in that country.

The coup attempt was genuinely unpopular. Erdogan blames it on the Gulen movement, a shadowy cult-like organization that for years was allied with Erdogan.

But in the aftermath, Erdogan took the failed coup as the pretext under which to strengthen the central state. He had had some 150,000 persons fired from government jobs, and arrested 100,000. Obviously, 250,000 people did not conspire to overthrow Erdogan on July 15. Moreover, many of those targeted had nothing to do with the Gulen movement, but had simply criticized Erdogan from a secular or leftist point of view.

Supporters of the center left Republican People’s Party (CHP), which now holds about 25% of the seats in parliament but had ruled Turkey for most of the 20th century, had rallied last Sunday in the thousands to protest Erdogan’s assault on the rule of law and civil liberties.

In his Istanbul speech on Saturday, Erdogan pledged to sign any law sent him by parliament reinstating the death penalty, which Turkey had abolished in 2004 as part of its attempt to join the European Union. He said of the coup plotters, “We will chop off their heads.” He also urged that they be made to appear in court in orange jumpsuits like those the US makes prisoners in Guantanamo wear. Obviously, such a procedure would prejudice the judge against the defendants even though they might not have been proved guilty by other means. Turkey would certainly be removed from any queue for EU membership if it resumes executing people.

Erdogan fired another 7,000 government workers on Saturday on political grounds.

Meanwhile, the The Republican People’s Party (CHP) announced that it would boycott the special night meeting on the coup, complaining that the talks by by its leaders had been cancelled. CHP leader Kemal Kılıçdaroğlu did address parliament. In Erdogan’s own speech the president branded the opposition leader a coward for not coming into the streets a year ago in the face of the coup.

In essence, the coup failed. But Erdogan’s countercoup has succeeded gloriously, and has functioned as a sort of a coup in its own right, turning Turkey definitively into a banana republic for the foreseeable future. It is a sad end to the brief turn 2002-2012 of Turkish politics toward greater pluralism and openness.