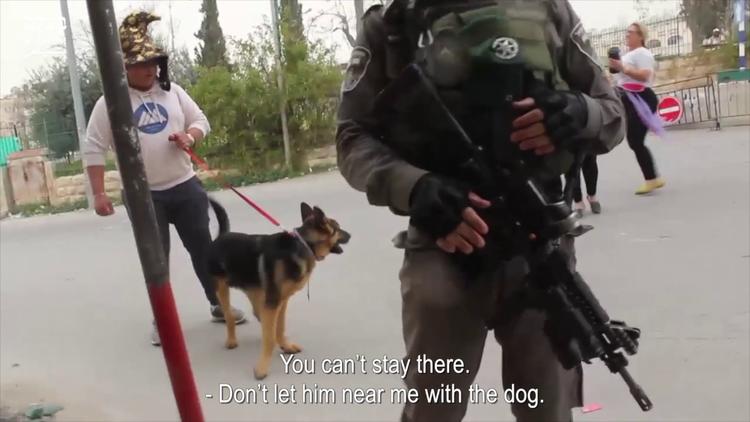 Progressive Jewish groups are rising to criticize the Israeli occupation and fight fundamentalism in both Israel and the West.

In the TV show Transparent, the Pfeffermans are an infuriating family.

Mort, the patriarch, is transitioning to Maura, and much of the focus of the show is on the transgender experience. But it’s hard to miss that Maura and her three children, not to mention ex-wife Shelly, are narcissists who wreak havoc on anyone who comes into emotional proximity.

The self-critical portrayal of Jews — creator Jill Soloway patterned the Pfeffermans on her own family experiences — is a staple of American entertainment, from Woody Allen movies to Curb Your Enthusiasm on television. The recent play Bad Jews picks up on these themes in its depiction of a trio of cousins who fight over their grandfather’s necklace on the eve of his funeral. It’s also a central preoccupation of literature from the novels of Philip Roth to the stories of Nathan Englander — literature that, when I was growing up as a secular Jew in New Jersey, served as my cultural lodestar.

A “bad Jew” in this context is not simply someone who eats bacon or makes light of the High Holidays or (god forbid!) marries a shiksa. Nor is this the “bad Jew” of anti-Semitic literature — the vile, conspiratorial, money-hungry caricature. The “bad Jew” who secretly controls the world doesn’t exist.

No, the “bad Jews” I mean are neither Seinfelds nor Shylocks. They may or may not be religiously observant, but they are certainly not socially observant. They are selfish and self-serving and don’t care a fig about the good of the whole. They are the opposite of a mensch, a Yiddish word that means a person of integrity.

Such “bad Jews” don’t just exist in the world of imagination. Such selfishness can be found in the actions of individuals and certain Jewish communities in the United States and Israel. It’s difficult for non-Jews to criticize the actions of “bad Jews” without risking the label of “anti-Semitic.” But fortunately, as in the entertainment world, there are voices within the Jewish community that are taking them to task.

Israel and the Occupation

In small communities in the New York area, ultra-Orthodox residents send their children to private religious schools and complain about paying taxes to support the public schools.

A few years ago, the Hasidim of East Ramapo, New York decided to do something about it. As This American Life reports, they organized politically to elect members of the local school board. The Hasids were so successful that they managed to take over the whole board. Then they began to cut funding to the local public schools, where most of the students are African American and Latino. The resulting feud became real ugly, real fast.

The ultra-Orthodox of East Ramapo are not the only Americans who have seceded from public schools. Plenty of Christians now advocate an “exodus” from public education. Entire states like Arizona and Kansas are providing tax credits that help parochial schools. But the East Ramapo case is particularly painful because of the racial divide, the naked contempt for majoritarian values, and the fact that poor Jews of an earlier generation received tremendous benefits from public schools.

The ultra-Orthodox have had an equally powerful impact in Israel. With an average of 6.5 children — the rate for Israel as a whole is closer to 3 — the ultra-Orthodox have acquired political power commensurate with their increasing numbers (the Shas party, with 11 seats in the Knesset, even plays a kingmaker role). They control the prayers at the Western Wall and who ultimately, in Israel’s system, can be considered Jewish.

They are also increasingly settling in the Occupied Territories of the West Bank. Nearly one-third of all Israeli settlers are now ultra-Orthodox. “Ultra-Orthodox Jews were initially opposed to settling the West Bank,” reports The Forward. “But overcrowding in Jerusalem and in Orthodox sections of the Tel Aviv metro area have made settlement an easy choice for many.”

Settlers, both ultra-Orthodox and others, care very little about those who live outside their gated communities. They are as collectively narcissistic in their own way as the Pfeffermans. They are as singularly uninterested in the larger common good as the East Ramapo Hasids. Indeed, “bad Jews” can best be characterized by a “settlement mentality.” It’s a zero-sum, us-versus-them, build-the-walls-higher kind of thinking.

The settlements of Israelis in Palestinian territory stem from a war that took place 50 years ago. In 1967, Israel defeated Egypt, Syria, and Jordan in a six-day conflict. It annexed East Jerusalem and seized control of the West Bank and Golan Heights. There are today about 420,000 Israeli settlers in 126 settlements in the West Bank.

David Shulman, an Israeli expert on the languages of India, has written perceptively about the devastating consequences of the settlements on Palestinians as well as the corrosive impact on Israelis. In his most recent piece in The New York Review of Books, he writes:

The settlers themselves, however obnoxious, bear only a portion of the blame for the atrocities they commit. They carry out the policies of the Israeli government, in effect maintaining a useful, steady level of state terror directed against a large civilian population. None of this can be justified by rational argument. All of it stains the character of the state and has, in my experience, horrific effects on the minds and hearts of young soldiers who have to carry out the orders they are given. A few unusually aware and conscientious ones have had the courage to speak out; as always in such situations, most people just go along.

For many Palestinians and others, of course, the settlements are just the more recent outrage. The establishment of the Israeli state was accompanied by the nakba, or the expulsion, of more than 700,000 Palestinians from their homes. This “original sin” of the Israeli state is one shared by many other countries — for instance, the United States and the slaughter of Native Americans or Australia and the subjugation of the Aborigines.

Israel’s sin, however, has not been obscured by the passage of hundreds of years or expiated by an apology (like Australia Prime Minister Kevin Rudd’s heartfelt 2008 apology and some subsequent compensation packages for indigenous Australians). Worse, the Israeli government, by refusing a two-state solution and continuing to support new settlements, has only compounded the problem.

George Soros, the Hungarian-born financier, elicits very strong reactions. Some praise him for his efforts to strengthen civil society around the world through the Open Society Foundation (full disclosure: I’ve received a fellowship from the foundation) and his embrace of internationalism. Others criticize his investment decisions, such as his bet on the British currency to plummet, which netted him a billion dollars and cost British taxpayers a pretty pence.

Still others see in Soros an opportunity for anti-Semitism.

Earlier this month, the Hungarian government of Viktor Orban, who was once a beneficiary of Soros largesse, mounted an attack on the financier philanthropist. With posters and TV ads, it accused Soros of supporting the migration of millions of refugees to Europe, some of whom might find their way to Hungary. The campaign relied on some familiar anti-Semitic tropes — like Soros as a puppet master controlling the opposition Socialist Party’s candidate for prime minister — and it generated a good amount of explicitly anti-Semitic graffiti. Both the Hungarian Jewish community and the Israeli ambassador to Hungary issued strongly worded condemnations of the ad campaign.

Israeli Prime Minister Benjamin Netanyahu, however, felt differently. He ordered the foreign ministry to retract the Israeli ambassador’s statement. In its place, the ministry said, “In no way was the statement meant to delegitimize criticism of George Soros, who continuously undermines Israel’s democratically elected governments by funding organizations that defame the Jewish state and seek to deny it the right to defend itself.”

Soros, in other words, is a “bad Jew” because he has the temerity to fund groups that “defame the Jewish state.” So, who has Soros funded? Hamas? Hezbollah? The Iranian government?!

No, he has provided some support to J Street, a progressive organization that is explicitly pro-Israel. He’s also funded an Israeli human rights organization (B’Tselem) and Breaking the Silence, a organization started by Israeli Defense Forces veterans who are speaking out against the state’s occupation policies.

To my mind, all this makes George Soros a mensch, a Jew who is thinking about the good of the whole. He is trying to defend the least powerful — migrants, Palestinian disposed. He is using his gains, however gotten, to help others with their losses.

So, what does that make Benjamin Netanyahu?

In January 2016, the Israeli government brokered an agreement that men and women could pray together at the Western Wall in Jerusalem. It took five years to negotiate the controversial deal.

Last month, however, Netanyahu pulled out of the agreement, bowing to pressure from the ultra-Orthodox political factions. Jewish organizations around the world immediately leapt to criticize the Israeli prime minister.

The debate is not just over who can pray at the Western Wall. It’s a battle between modernists and traditionalists. The Shas party wants to drag Israel back to some imagined past in the same way that Salafists want to recreate 6th-century Islam throughout the Muslim world. The ultra-Orthodox have ultra-conservative social views (on women, on LGBT issues) and want the state to impose the Jewish version of sharia law.

This is an intra-Jewish struggle. Ultimately, it is about who is a good Jew and who is a bad Jew — and who gets to make that definition.

Gil Steinlauf, a Conservative rabbi in the Washington, DC area, has written about his blacklisting by the official religious authority of the Israeli government, the Rabbanut. Steinlauf’s more pluralistic Judaism and his progressive take on social issues have meant that the Rabbanut rejects his endorsement of immigrants trying to prove their Jewishness in order to move to Israel. Again, it comes down to the influence of the ultra-Orthodox. Steinlauf writes,

Israel has no separation of synagogue and state, and since 1948, ultra-Orthodox Jews have had the sole authority over personal-status issues in Israeli law. Moreover, ultra-Orthodox groups wield considerable power in the Israeli parliament and exert great influence over legislation. This lethal mixture of politics and religion is tearing apart the Jewish world through this list and similar exclusionary tactics.

These voices within the Jewish community — criticizing the occupation, funding progressive Jewish organizations, coming out against the tyranny of the ultra-Orthodox — are as vital as the Christian voices challenging the religious intolerance of the Church and Muslim voices challenging Salafist orthodoxy.

Ultimately, you don’t have to be Jewish to be a mensch. It’s about how you deal with people, period, whether they’re like you or not like you.