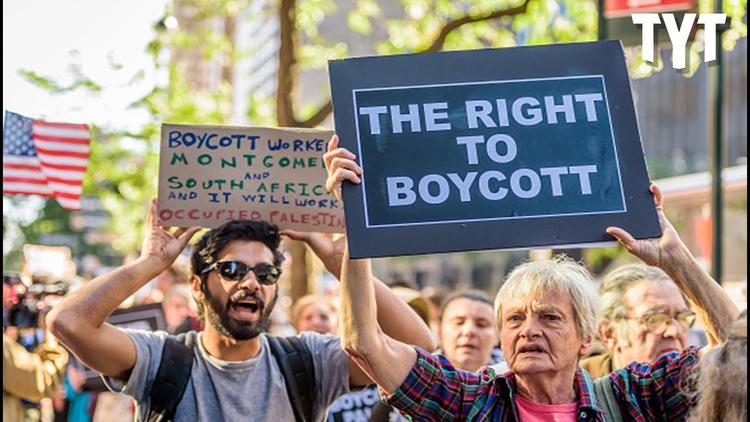 The goal is to frighten people from engaging in the completely legal act of living out their values.

In 1966, the NAACP of Claiborne County, Mississippi launched a boycott of several white-owned local businesses on the basis of racial discrimination.

It was so impactful that the local hardware store filed a lawsuit against the individuals and organizations who coordinated the boycott. After 10 long years of litigation, the Mississippi Supreme Court ruled in favor of the white businesses and ordered the NAACP to pay for all their lost earnings.

Years later, in 1982, the U.S. Supreme Court ruled 8-0 to overturn the lower court’s decision on the basis that nonviolent boycotts are a form of free speech protected by the First Amendment. In announcing the unanimous decision, Justice John Paul Stevens said, “One of the foundations of our society is the right of individuals to combine with other persons in pursuit of a common goal by lawful means.”

That should have been the end of it. But now, Americans’ right to boycott is under attack once again — thanks to a vicious anti-boycott bill making its way through the Senate.

In particular, it appears to target the Boycott, Divestment, and Sanctions (BDS) movement. BDS is an international movement calling on individuals, institutions, and governments to boycott Israeli products until it ends its occupation of Palestinian lands. The boycott is explicitly nonviolent and is supported by activists, celebrities, faith-based groups, and political and social justice organizations around the world.

The proposed Israel Anti-Boycott Act would make it a felony for Americans to support BDS, with a penalty of up to $1 million and 20 years in prison.

Unfortunately, the bill enjoys bipartisan support: 32 Republicans and 15 Democrats are currently signed on as cosponsors, including party leaders like Chuck Schumer (D-NY), Claire McCaskill (D-MO), and Ted Cruz (R-TX). In response, the ACLU issued a letter urging members of the Senate to oppose the bill based on its “direct violation of the First Amendment.” (Following the publication of the ACLU’s letter, several members of Congress agreed to review their sponsorship, and Kirsten Gillibrand (D-NY) became the first Senator to officially withdraw sponsorship.)

The Israel Anti-Boycott Act would function by amending an earlier law from 1979, which prohibits American citizens and corporations from complying with boycotts called for by foreign nations against U.S. allies. The new law would include boycotts “fostered and imposed by international governmental organizations” like the United Nations. In this, it’s a direct response to the 2016 UN Human Rights Council resolution discouraging businesses from operating in Israeli settlements in the West Bank and East Jerusalem.

In one way, it’s genius. By claiming a connection between BDS and the UN — a connection the UN has never embraced, in that resolution or any other — the bill attempts to work around NAACP v. Claiborne Hardware Co.

But the BDS movement is not a product of the UN — it has nothing to do with it at all, except to the degree that it’s based on international law. The BDS call to action was issued in 2005 by a coalition of 170 Palestinian political parties, professional associations, refugee networks, and civil society organizations. BDS is a tactic, not an organization, and the boycott has always been grassroots and decentralized, meaning anyone anywhere can partake in BDS by making the simple decision to do so.

Whether the congressional supporters of the Israel Anti-Boycott Act misunderstand or are intentionally misrepresenting BDS is uncertain, but the Supreme Court decision of 1982 is clear as crystal: Americans’ right to peaceful boycott with the aim to “bring about political, social, and economic change” is protected by the First Amendment. That means this bill is more than egregiously immoral — it’s unconstitutional.

Significantly, it declares the UN Human Rights Council’s 2016 position on Israeli settlements an “action to boycott, divest from, or sanction Israel.” Yet that resolution took no position on the boycotting of goods produced in Israel proper — it only took aim at Israeli settlements in Palestinian territory, which are illegal under international law.

U.S. policy since 1979 has recognized that the Israeli settlements are “inconsistent with international law.” By contrast, the new bill effectively erases any distinction between Israel and its settlements in the West Bank. If it’s passed, anyone who chooses not to do business with or buy items manufactured in illegal Israeli settlements can be convicted, fined, and even jailed.

Efforts to curb this kind of activism are often touted as efforts to combat anti-Semitism. Yet polls show that only 17 percent of American Jews support the continued construction of settlements. The bill is so controversial, in fact, that the liberal pro-Israel organization J Street, which has long opposed BDS, recently announced its opposition to the proposed law on the basis that it “divides [opponents of the global BDS movement] by making the issue about the settlements.”

It’s difficult to know exactly how broadly the law, if passed, will be enforced. Its intentionally vague language leaves a lot to the imagination, and perhaps that’s exactly what’s intended. The real goal may be to frighten people from engaging in the completely legal act of living out their values in their economic choices.

But we can’t let fear prevent us from exercising our rights and fulfilling our moral obligations. The silver lining is that every effort to quell the BDS movement has served to strengthen it. Each attempt at criminalizing the boycott, whether on the state or federal level, has been met with a spike in Google searches for BDS and related terms.

And with the uproar caused by this new bill, the right-wing pro-Israel lobby just may prove to be the BDS movement’s best ally.

Aniqa Raihan is a writer, activist, and Next Leader at the Institute for Policy Studies. She was a member of Students for Justice in Palestine at George Washington University, her alma mater.

This piece is a joint publication of Foreign Policy In Focus and TheNation.com.