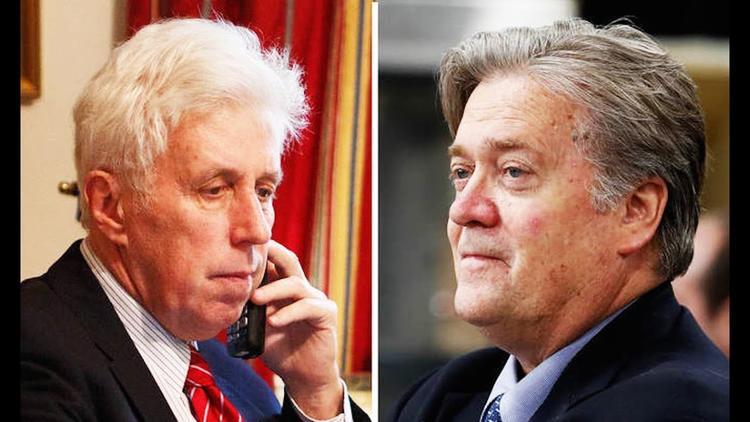 Steve Bannon ran, and is still likely pulling the strings at, Breitbart, the “Stormfront” in a business suit with a skinny tie. Bannon once characterized it as enabling what he called the “alt right,” by which he meant a slightly more presentable version of the skinheads, KKK, bikers, Neo-Nazis and other far right fringe supremacist groups that might appeal to today’s youth, including the educated.

Breitbart has been wildly successful, since conspiracy theories, race resentment, Islamophobia, misogyny and other base emotions have a visceral appeal.

I would argue that the success of the Neo-Neo-Nazis calling themselves “alt-” lies in an unconscious class dilemma that they displace onto race.

That is, not only must Trump dump Bannon, but so should the youth protesters who have been misled by Breitbart fake news. They should turn instead to a different challenger of the status quo, Bernie Sanders

Since the Reagan restructuring of the tax code in the 1980s and following on further such changes under Clinton and Bush, the United States is becoming. more and more unequal society. The top 1% owned 25 percent of the privately held wealth in the US in the 1950s. How much they own now is controversial but it is between 36% and 42%. The trend line is not in doubt. They take home 20% of the country’s income annually now, up from 10% in the 1960s.

These inequalities build up year after year. If 1% gets 20% this year and next year and the year after, after a while they will have it all.

The rich and government institutions in the US have for decades conspired to knock any realistic sense of class out of the American public. Workers making $21,000 a year, middle class families pulling down $40,000, and businessmen making a million dollars a year are all typically rolled up into “the middle class” in American political discourse. But the fact is that the top 10% or the top 1% or most importantly the top 0.1 percent benefit from a different set of policies than do working and middle class Americans.

Businessmen like few regulations and not having to pay fringe benefits, and very low taxes on business earnings and capital gains, so that even though they use the national infrastructure most intensively, the working and middle classes are made to pay for it.

If you want to understand why the Republican Party often sounds like it is on Mars, denying Climate Change, arguing that all problems can be solved by lower taxes, not wanting universal health insurance, etc., you have to understand that it represents the 1%, not the 99%. It lies to the 99% about standing up for the little guy, as Trump did. But look at their actual legislation to see whom they help and whom they hurt.

So the angry young people protesting about being replaced or being made redundant aren’t wrong. They are victims of class oppression, and especially of Neoliberal policies that privatize public services like education and even water delivery and deregulate in favor of businesses and against consumers. They are wrong that this is being done to them by Jews or globalism or Mexicans. Most Jews are suffering from these policies along with everyone else, and the most articulate critic of inequality in our time is not Trump or Bannon but Bernie Sanders.

Bannon, a multi-millionaire, tells these young people that they should idolize wealthy businessmen like Donald Trump, and that the reason they are having trouble getting a job is not increasing inequality and concentration of wealth in a few hands, but because immigrants or Latinos or African Americans are taking their jobs and pushing them to the bottom of the pile. And Muslim terrorists are lording it over them.

In fact, studies show that immigrants don’t have good enough English to take jobs away from most white workers, and that they fill different niches in the economy. Immigrants actually expand the economy and would be helping white workers and middle classes do better except for one thing. The top 1% is capturing 20% of the annual income of the country, so the expansion of GDP made possible by the immigrants isn’t going proportionally to white workers.

Bannon and Breitbart are the purveyors of the ultimate false consciousness, the illusion of race oppression to hide from their dupes the reality, of class oppression. Of course, dividing people by race and national origin and religion is extremely convenient for the Rupert Murdochs and Koch Brothers and Scaifes and others. Why do you think respectable WASPs who yearn to be invited to white tie PBS donor parties fund an Islamophobia network to the tune of tens of millions of dollars? To give people some other target to hate than their increasing share of the national wealth.

Nobody needs to hate anyone. All we have to do is go back to the tax code as it existed under Republican president Dwight Eisenhower and make sure there are opportunities for energetic young people to move up.

Trump and Bannon are taking us in the other direction. The tax code they are cooking up with the GOP Congress will be like a firehose spewing money at the wealthiest and depriving everyone else. Trump’s Scott Pruitt is destroying the EPA so that corporations can poison us at will for a profit without facing any backlash.

So the corporations and the 1% benefit from Charlottesville. Who cares about some old Confederate general? Whether a statue to him stands somewhere won’t put money in anyone’s pocket. And if young white people want to be proud of something, they can be proud of America’s role in defeating Nazism or our Catholic president Jack Kennedy’s successful moonlanding project, or American science triumphs and Nobel prizes, often won by Jews and members of other minorities. Hanging your self-worth on the Confederacy having been glorious is a fool’s errand.

So if they were smart, and really wanted to take back their country, these young people would turn to Bernie Sanders and not a hot duplicitous mess like Bannon. They would join unions and support a substantial raise in the minimum wage and get behind a single payer health insurance program. These things would all benefit them in a way that the dust of Jefferson Davis cannot. It is true that they will also benefit African-Americans and Latinos and women. That’s called synergy, when something is bigger than the sum of its parts.

It won’t help Bannon, though. It will raise his taxes and it will drain the hatred that fuels his support base.

These youth are being trained like circus animals, to hate the Left, which is the only political force that can actually rescue them. They are being trained to hate Jews and African-Americans and Latinos and Muslim-Americans, when it is only by joining forces with them that they have a prayer of outwitting the billionaires on public policy. They are being taught to reach back to rickety nineteenth century plantations for their social ideal, when the future is Elon Musk and Tesla and the gigafactory– enterprises that they can take part in if they get the right training.

Of course Trump needs to fire Bannon, whose propaganda for the Far Right in the past decade led directly to the Vanilla ISIS car-killing in Charlottesville. But more importantly, the people with genuine grievances about lack of jobs and lack of opportunity and lack of dignity need to be taught how to get those things in a positive way.