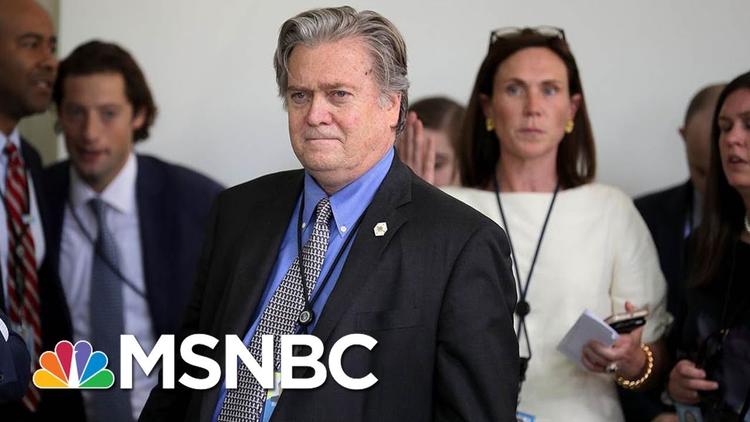 Steve Bannon by his own admission promoted the Breitbart webzine as a mouthpiece of white supremacism, in an attempt to create a new, well-educated and well-dressed version of seedy racism. The Republican Party had since the Nixon Strategy of the 1970s played on a soft version of white resentment, but used dog whistles and kept the Klan and the Neo-Nazis at arms length. Bannon’s plot to have the white grievance branch of the party take it over in a way resembles the way the Evangelicals gradually took over the GOP. Since white evangelicalism is often imbued with a dose of white supremacy, there was even a chance that Bannon could coopt them.

White grievance drove Bannon’s major policy proposals– cutting way back on immigration and especially from non-English-speaking countries, banning Muslims from coming into the country at all, and a neo-mercantilism in which the US would provoke a trade war with China.

In his “American Prospect” interview, Bannon disingenuously called the white supremacists losers. He was thereby attempting to escape the blame for Charlottesville, but it won’t work. Everyone knows he whipped up the fervor of the far right and made it a constituency for Trump, one that previously presidents since 1932 have avoided.

Bannon urged a disentanglement of the US from the Middle East and a turn inward. Hence his interest in having the US military withdraw from Afghanistan in favor of Erik Prince’s private army, which used to be called Blackwater. Since Blackwater extensively contributed to making the Bush occupation of Iraq a huge disaster, putting Prince in charge of Afghanistan is unwise. In any case, with Bannon gone, that decision will likely be made by generals Mattis and McMaster, at Defense and the NSC respectively, and they appear to be considering a troop escalation. The are the anti-Bannon.

Although Bannon appears to have argued for withdrawing from the JCPOA (Iran deal), it likely was in quest of less globalism and a way of dumping Iran in Europe’s lap rather than because he wanted a military confrontation with Iran.

Rex Tillerson at State, H. R. McMaster at NSC and Jim Mattis at Defense are all in favor of keeping the Iran deal in place, and it is hard to see what force could now overrule them (Pompeo at CIA is an outlier on this issue and not as powerful as the generals because of Trump’s deference to the military).

Bannon’s suspicion of the gung-ho hawks in Washington extended to the North Korea issue, where, he proclaimed, there is no military solution. But one of the reasons Bannon wanted to play down that issue is that taking the N. Korea crisis seriously requires Washington to engage positively with China.

Instead, Bannon wanted to cut N. Korea loose, so as to have a clear shot at China. Bannon did not want to negotiate with China, he wanted to force it to stop what he sees as unfair trade and currency policies. He did not want to be beholden to Beijing to deal with North Korea, hence his declaration that the latter problem was insoluble and certainly by military means.

Bannon’s plan for a trade war with China is opposed inside the White House by those Bannon called globalists, including WH economic adviser Gary Cohn, by Jared Kushner, and by key cabinet members.

So the foreign policy winners of Bannon’s departure are China and Iran. You could say Afghanistan has won something if it won’t be made into the equivalent of a privatized American prison. But the war there isn’t going well for Kabul and a small US troop escalation can’t address the problem. Nor can the status quo hold. I think Mattis and the others are afraid that the Taliban could sweep into Kabul and take back over the country, which would be rather a black eye for the Trump administration.