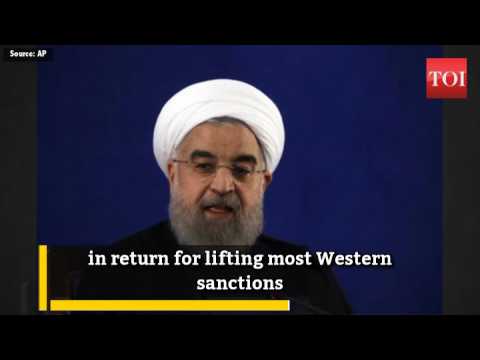 NEW YORK – In recent weeks, US President Donald Trump and his advisers have joined Saudi Arabia in accusing Iran of being the epicenter of Middle East terrorism. The US Congress, meanwhile, is readying yet another round of sanctions against Iran. But the caricature of Iran as “the tip of the spear” of global terrorism, in Saudi King Salman’s words, is not only wrongheaded, but also extremely dangerous, because it could lead to yet another Middle East war.

In fact, that seems to be the goal of some US hotheads, despite the obvious fact that Iran is on the same side as the United States in opposing the Islamic State (ISIS). And then there’s the fact that Iran, unlike most of its regional adversaries, is a functioning democracy. Ironically, the escalation of US and Saudi rhetoric came just two days after Iran’s May 19 election, in which moderates led by incumbent President Hassan Rouhani defeated their hardline opponents at the ballot box.

Perhaps for Trump, the pro-Saudi, anti-Iran embrace is just another business proposition. He beamed at Saudi Arabia’s decision to buy $110 billion of new US weapons, describing the deal as “jobs, jobs, jobs,” as if the only gainful employment for American workers requires them to stoke war. And who knows what private deals for Trump and his family might also be lurking in his warm embrace of Saudi belligerence.

The Trump administration’s bombast toward Iran is, in a sense, par for the course. US foreign policy is littered with absurd, tragic, and hugely destructive foreign wars that served no real purpose except the pursuit of some misguided strand of official propaganda. How else, in the end, to explain America’s useless and hugely costly entanglements in Vietnam, Afghanistan, Iraq, Syria, Libya, Yemen, and many other conflicts?

America’s anti-Iran animus goes back to the country’s 1979 Islamic Revolution. For the US public, the 444-day ordeal of the US embassy staff held hostage by radical Iranian students constituted a psychological shock that has still not abated. The hostage drama dominated the US media from start to finish, resulting in a kind of public post-traumatic stress disorder similar to the social trauma of the 9/11 attacks a generation later.

For most Americans, then and now, the hostage crisis – and indeed the Iranian Revolution itself – was a bolt out of the blue. Few Americans realize that the Iranian Revolution came a quarter-century after the CIA and Britain’s intelligence agency MI6 conspired in 1953 to overthrow the country’s democratically elected government and install a police state under the Shah of Iran, to preserve Anglo-American control over Iran’s oil, which was threatened by nationalization. Nor do most Americans realize that the hostage crisis was precipitated by the ill-considered decision to admit the deposed Shah into the US for medical treatment, which many Iranians viewed as a threat to the revolution.

During the Reagan Administration, the US supported Iraq in its war of aggression against Iran, including Iraq’s use of chemical weapons. When the fighting finally ended in 1988, the US followed up with financial and trade sanctions on Iran that remain in place to this day. Since 1953, the US has opposed Iran’s self-rule and economic development through covert action, support for authoritarian rule during 1953-79, military backing for its enemies, and decades-long sanctions.

Another reason for America’s anti-Iran animus is Iran’s support for Hezbollah and Hamas, two militant antagonists of Israel. Here, too, it is important to understand the historical context.

In 1982, Israel invaded Lebanon in an attempt to crush militant Palestinians operating there. In the wake of that war, and against the backdrop of anti-Muslim massacres enabled by Israel’s occupation forces, Iran supported the formation of the Shia-led Hezbollah to resist Israel’s occupation of southern Lebanon. By the time Israel withdrew from Lebanon in 2000, nearly 20 years after its original invasion, Hezbollah had become a formidable military, political, and social force in Lebanon, and a continuing thorn in Israel’s side.

Iran also supports Hamas, a hardline Sunni group that rejects Israel’s right to exist. Following decades of Israeli occupation of Palestinian lands captured in the 1967 war, and with peace negotiations stalemated, Hamas defeated Fatah (the Palestine Liberation Organization’s political party) at the ballot box in the 2006 election for the Palestinian parliament. Rather than entering into a dialogue with Hamas, the US and Israel decided to try to crush it, including through a brutal war in Gaza in 2014, resulting in a massive Palestinian death toll, untold suffering, and billions of dollars in damage to homes and infrastructure in Gaza – but, predictably, leading to no political progress whatsoever.

Israel also views Iran’s nuclear program as an existential threat. Hardline Israelis repeatedly sought to convince the US to attack Iran’s nuclear facilities, or at least allow Israel to do so. Fortunately, President Barack Obama resisted, and instead negotiated a treaty between Iran and the five permanent members of the United Nations Security Council (plus Germany) that blocks Iran’s path to nuclear weapons for a decade or more, creating space for further confidence-building measures on both sides. Yet Trump and the Saudis seem intent on destroying the possibility of normalizing relations created by this important and promising agreement.