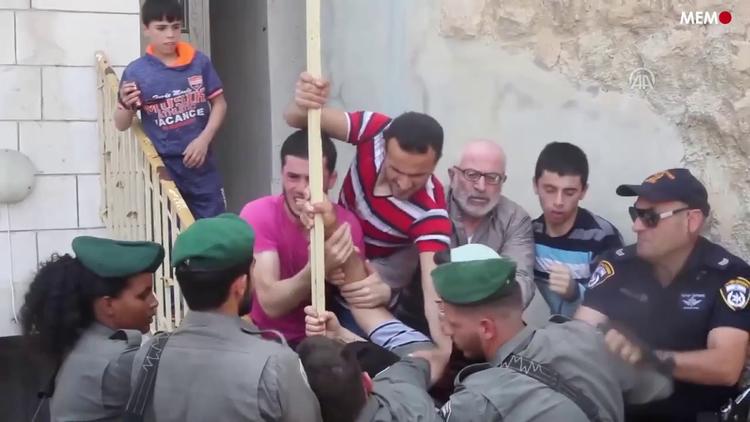 BETHLEHEM (Ma’an) — Almost one week after dozens of extremist Israeli settlers raided and occupied a Palestinian home in the southern occupied West Bank city of Hebron, an Israeli settler declared on Monday that he and his family will be officially moving into the home, despite an ongoing legal battle between the Palestinian homeowners and Israelis.

The Israeli settler who made the declaration, according to Hebrew media, was Yossi Dagan, a leader of the Homesh First organization — an umbrella organization of right-wing settler groups whose goal is to rebuild Homesh settlement, which was destroyed and evacuated by the Israeli government in 2005.

Hebrew media reported on Monday that Dagan accused the Israeli government of “stalling” on legal procedures, and called on Israeli leaders to “stop this injustice” and to move the ownership of the home — which belongs to the Palestinian Abu Rajab family — to Dagan and the settlers of Hebron.

Residents of the Abu Rajab house, located in the Old City of Hebron near the Ibrahimi Mosque, have been embroiled in a legal battle with Israeli settlers for years, after Israeli Prime Minister Benjamin Netanyahu declared his intention to encourage the establishment of a new illegal Israeli settlement there to be named Beit Hamachpela.

Netanyahu reportedly asked Defense Minister Avigdor Lieberman to send an army delegation to negotiate with the settlers and evacuate them from the building.

However, the settlers posted a Hebrew-language sign on the building reminding Netanyahu of a statement he had written in December 2013: “Prime Minister Netanyahu: To house and to populate the house of patriarchs. He who tries to uproot us from the city of our ancestors will find the opposite. We will continue to fight terrorism and strike terrorists in one hand, and in the other hand, we will strengthen settlements.”

At the time of his statement, after an Israeli soldier was shot dead by a Palestinian in Hebron, Netanyahu had allowed settlers to take over the Abu Rajab family’s building.

However, the decision was suspended after the Hebron Rehabilitation Committee (HRC) appealed the decision in front of an Israeli court.

Since Wednesday, the settlers have also moved furniture inside the building and hung large Israeli flags, as Israeli soldiers threatened to detain members of the Abu Rajab family when they tried to protect their home.

HRC lawyer Tawfiq Jahshan told Ma’an on Sunday that the Abu Rajab building was first stormed by settlers in March 2012, adding that the Palestinian family had submitted six complaints to Israeli courts before a ruling was reached to evacuate the settlers from the premises.

“We filed a complaint to Israeli police before midnight (on July 25) asking to evacuate the settlers, and the day after we talked to Israeli legal organizations,” Jahshan said. “If the settlers are not evacuated, we will take the case to Israeli courts.”

Located in the center of Hebron — one of the largest cities in the occupied West Bank — the Old City was divided into Palestinian and Israeli-controlled areas, known as H1 and H2, following the Ibrahimi Mosque massacre.

Some 800 notoriously aggressive Israeli settlers now live under the protection of the Israeli military in the Old City, surrounded by more than 30,000 Palestinians.

Palestinian residents of the Old City face a large Israeli military presence on a daily basis, with at least 20 checkpoints set up at the entrances of many streets, as well as the entrance of the Ibrahimi Mosque itself.