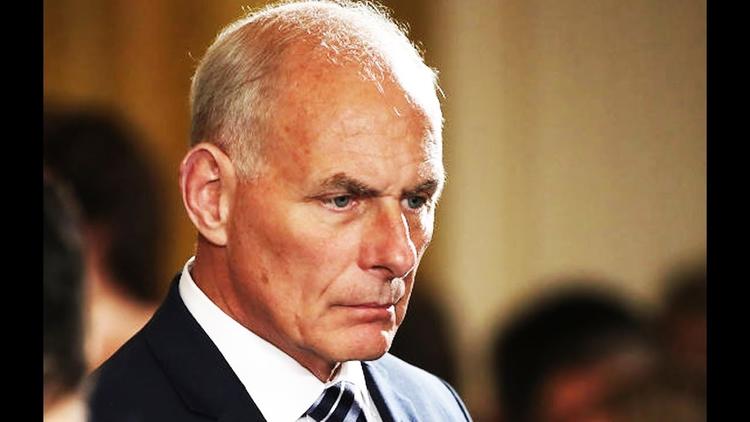 John Kelly will get a lot of good will from having fired the foul-mouthed Anthony Scaramucci. But should he? At least Scaramucci had been gunning for Steve Bannon, the scary far, far right wing white nationalist who serves as White House strategist. You have a sense that while Kelly is just very, very conservative, there are lots of things about Bannon he is comfortable with. That isn’t a comforting thought.

1. Kelly thinks we are under siege:

As Michael Cohen wrote in response at the Boston Globe, “Cyber-terrorists have never killed an American citizen, no failed state threatens America and more Americans are killed by lightning strikes than sadistic radicals.”

2. Kelly said that construction on Trump’s border wall would begin by the end of this summer. It won’t.

3. Nor is the wall needed or wanted by a majority of Americans. Kelly is almost delusional about US immigration enforcement: “Nothing’s been done in the past eight years to to enforce the border rules and regulations, not to mention many of the immigration laws inside of the United States…”

Fact: The Obama administration deported at least as many people as the Bush administration had, if you use the same definition for deportations in both administrations. By sheer reported numbers, Obama deported some 2.5 million people during his 8 years while Bush deported 2 million. They probably actually deported about the same number. Kelly’s bizarre notion that the laws were not implemented since 2009 is flat wrong.

4. Kelly wanted to prioritize deportation of undocumented people who use marijuana on the circa 1910 grounds that it is a “gateway drug.” It is not, or Colorado would be nothing but heroin addicts. Legalization of marijuana tracks with lower crime rates.

5. Kelly said of reports that Jared Kushner had met with the Russians during the campaign, before these reports were confirmed, that “any channel of communication” with Russia “is a good thing.” .

6. Not to mention Kelly’s bizarre performance during Trump’s first attempt at a Muslim ban, when he gladly acted without any regard to the US constitution and claimed to have authored the policy (Bannon and Miller sprang it on him). The most dangerous thing of all is that Kelly is a good soldier and will do as he is told by Trump.

The Young Turks: “Why The Media Worships John Kelly”